Tahir Hussain “Bob” Babar from the SAP HANA Academy provides an overview on how to create storyboards in SAP Lumira.

Storyboards allow users to group their created visualizations together. Storyboards possess a range of storing control options that can change the format and feel of the storyboard to help increase it’s usability.

First, Bob opens the document he created in these prior videos (Basic Visualization, Complex Visualizations, and Other Charts)  that contains over 30 different visualizations. Bob advises users to give specific, and preferably short, titles to all of the visualizations they want to include in their storyboards.

Storyboards are created in the compose tab of SAP Lumira. The configuration options for the storyboard are located to the right of the canvas and a list of attributes and measures is located to the left. Users can toggle between the edit and view modes in the top toolbar. Edit mode enables changes to be made to a storyboard including adding visualizations, background colors and images, and editing the format of a storyboard’s title.

Next, Bob provides an example on how the controls feature works. Bob drags one of his visualizations (a 3D bar chart of sales revenue and target by state) onto the canvas. By adding the attribute of year to the controls panel Bob is now able to filter the data of visualization by selecting different years in the view mode.

The board action, clone board, allows users to duplicate their individual storyboards. Bob says that the cloning board action is useful because it enables users to only have to add attribute controls once to boards.

After naming, saving, and closing his storyboard Bob shows that the storyboard is now available in the stories category on the main SAP Lumira page.

Next Bob adds a few additional visualizations, a geo-pie chart, a waterfall chart and a tag cloud chart, to his storyboard. Then he demonstrates again how selecting the different control attributes in view mode changes the data for each visualizations.

Bob’s tutorial video shows how to stitch visualizations together by creating storyboards in SAP Lumira. 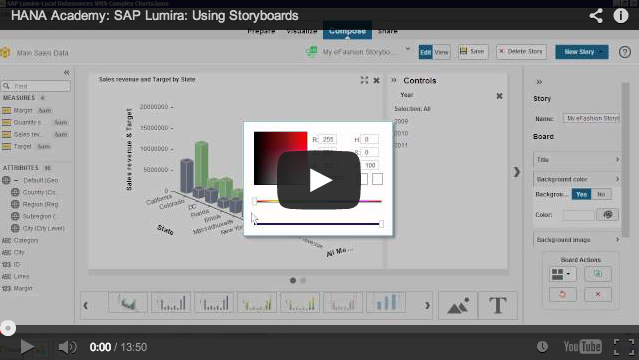