IMHO one purpose to write IF 1 = 0 code is to enable the cross reference of message raised in application code.

I have written several blogs to discuss the tip how to find the source code where the error message in UI is raised.

Most of the time you have to debug. ( Of course you can use source code scan approach to search the source code with keyword CRM_MDG_CORE 034 , the trouble is how you specify the package to be scanned, especially you are not familiar with the application and you know nothing about package name at all )

The where used List on message could only identify those occurrence where the MESSAGE keyword appears in code. Recently in our code review meeting there are some arguments about this usage. The pros like this approach since it enable the cross reference on message raising by method call and ease the maintenance. The opposition consider that it is “unreached code” and should not appear in production code.

I just check in the system and find there are plenty of such usage in SAP standard code, also I tested that currently no ATC or extended check profile will complain about this “unreached code”. Would you please kindly share your opinion of using IF 1 = 0 this way? Or do you have any concern about it?

I prefer an alternative approach: Use MESSAGE ... INTO.

By doing so, we kill two birds with one stone:

Thanks and that is a good alternative, except one minor issue: Extended check will complain that no read access is done on the dummy field, however it could be suppressed by pragma anyway 🙂

IMHO Better a Pragma than a dummy IF 🙂

I don't agree, I think it's really stupid. Every time I see something like "IF 1 = 0." I die a little bit inside. Shai's approach is what I usually do. Not only you achieve the 2 points he mentioned, but you also can have a break-point at the keyword MESSAGE.

thank you for drawing the ability to set breakpoint into my attention, which I neglected below.

I couldn't agree more and I abhor this type of code.  It is a wasteful hack when there are other alternatives to the problems you mentioned.  The part that kills me is that it is the most illogical use of a tool that's sole purpose is to function based on logic.  Testing two statically defined conditions for equality that are in fact not equal is absurd.

Just because something is heavily used in standard SAP doesn't make it good. People are only human and there is tons of nonsense in standard code.

That is bad because sometimes people cut and paste it into their own code thinking this must be a good way to do things.

In my view of the world using a condition like "IF 1 = 0" is foaming at the mouth, free energy crazy. It's like the craze that was in Syndey in the year 2000 when grown adults were walking around with flowerpots on their heads. I looked at this and thought WHY? They are going to regret this in ten years when they see a photograph of themselves taken at the time.

Hi Jerry - It does not make sense to use IF 1 = 0 because this condition will never pass. This is a bad programming in my opinion.

I agree to use 1 = 2 in smartforms.  But I will write "temporarily obsoleted" in the description field.

Sorry for the lack of knowledge but what do smartforms have in special to use this?

It's just a lazy way to comment a smartform node.  I use 1 = 2 when my functional consultant suddenly discards his requirement and I know for sure that he will change his mind again in near future.

Just wondering...is there a non-lazy way to do this?

I got it. It might be something worth doing for a fast test but definitely it should be removed before transporting to a quality/production system.

I'm sure that if smartforms function modules were not regenerated everytime you activate it, things would be simpler as you could control these using version management.

Thanks for the clarification Michael Lee

My functional consultants do the same, the requirement comes and goes, and I know that "whatever it is" wll jump back out of the grave.

In ABAP I comment out the code in question,and then comment it the week after, then cmment it out again etc.. with comments like the following:-

I thought SMARTFORMS were function modules at heart - are you unable to comment things out? You could in SAPSCRIPT! Not that I miss that particular tool.

Or are you not talking about program code at all but some sort of logical precondition you have to enter in a pop up box just like workflow?

Going back to ABAP, if the whole point of this 0 = 1 exercise is to find where in the code an error occurs, there surely must be a better way to do it. There could not be a worse way. ASSERT statements that only fire in DEV and QA, writing to the application log, anything, anything, rather than this obvious madness.

Or are you not talking about program code at all but some sort of logical precondition you have to enter in a pop up box just like workflow?

I think "1 = 2" in smartforms is used mainly to stop the printing of some SF element - template, text etc. I too put that condition in the "Conditions" tab with the text "Obsolete" 😎

You are all wrong.

This is actually quantum programming.

You will never know IF 1 = 0 until you debug it. This is the same concept of Schrödinger's cat.

If seems make no sense in real world, but in the program, anything would make sense, even pig can fly, you are playing as a god in a small world that you created.

I think that 1 = 0 was a technique used (to facilitate the "where-used" of the message) when there was no MESSAGE...INTO addition (just my opinion). And since it is widely used in standard BAPIs by SAP many ABAPers think that this is a smart way of doing it, at least i did 🙁

But now a days i use the MESSAGE...INTO & then the method IF_RECA_MESSAGE_LIST->ADD_SYMSG( ) to add the message to the application log 😎

May I suggest a more pragmatic considerations.

I the case of MESSAGE I like Shai Sinai idea .

(One other example may be the usage of FM ABAP4_CALL_TRANSACTION, which is widely used. At least before CALL TRANSACTION command was enhanced in NW 7.4).

However, in such case, I always prefer using appropriate data element instead of setting edit mask/conversion routine manually.

I need to send you a message.

Or use the phone... Eitan Rosenberg

what's the purpose for this block of code?

This is a code fragment from a program that use ALV using cl_salv_table.

In this case the "1 EQ 2" is used to documet the usage of Function module CONVERSION_EXIT_YTS01_OUTPUT  .

About CONVERSION_EXIT_YTS01_OUTPUT (This is a user function): 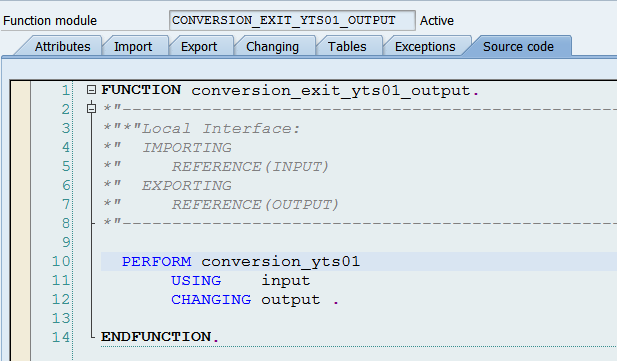 In the past I had a use case for IF 1 = 2 :
-> make code unreachable. Unless you jump to it in the debugger.
This works towards the person actually execution the code 1. Has authorization 2. (hopefully) has knowledge.
(There should be no need for such a thing - but sometime, there is!