The Transformation of the HANA Marketplace – Part Two – Changing the Game

In Part One – Introducing Tina Ross, we documented the events leading to the emergence of Tina Ross, and discussed a few probable triggers that would bring her to the Marketplace. Creating accurate personas and scenarios are important milestones in the design thinking journey; they are instrumental in building empathy for users, and in the words of design luminary Tim Brown of Ideo, “empathy is at the heart of design”, without which “design is pointless”.

Our next stop was to amalgamate these user requirements with business objectives and define a problem statement. Typically, the proverbial triumvirate (apologies for not using a Roman typeface there) – Product Management, Development, and User Experience – are involved in this phase, to address the viability, feasibility, and desirability of the product or solution being designed. In this instance, Development wasn’t involved, as feasibility was a bridge that we were to cross later. We wanted to come up with some really transformative (utopian?) concepts without being shackled by the limitations of what was immediately implementable. Unfortunately, such opportunities are few and far between in the life of a UX Designer. Maybe that’s why I am blogging about it in the first place!

There is much to be said about that all-important, crucial, synergy between Product Managers and User Experience Designers – think of a Venn diagram comprising two circles with a significant area of intersection in-between. I fully advocate a healthy conflict between both factions, because in my experience that has always resulted in a product that successfully addresses (sometimes exceedingly), both, user and business needs. Having worked with some terrific PMs in the past, I’ve learnt lots about prioritising requirements, managing stakeholders, and ultimately getting things done. (I hope that they have learned something useful from me too!). More about the PM-UX nexus, and how to leverage it effectively, in a blog post in the near future.

Generating revenue for 3M – can you imagine design thinking without Post-Its?? 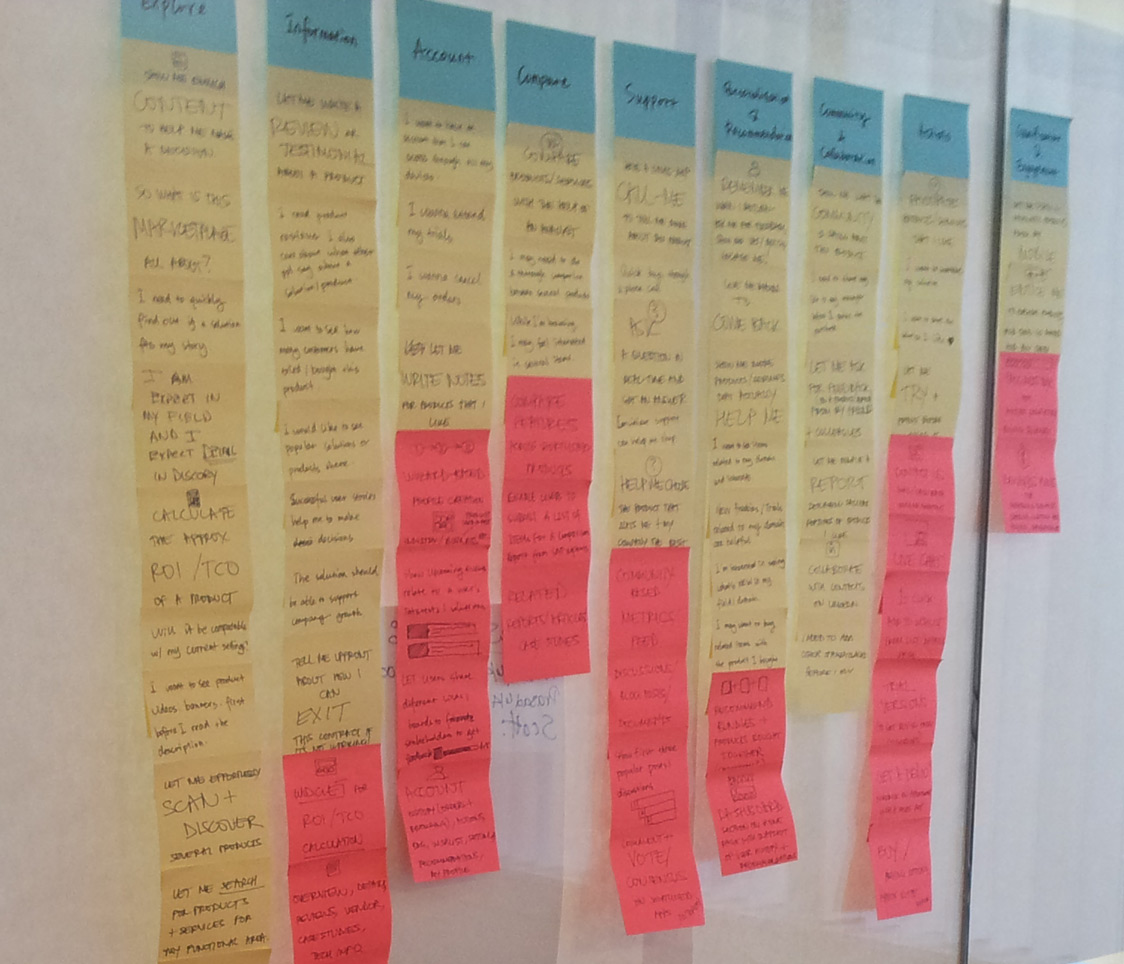 Feifei and I (representing UX) brainstormed frantically with Franklin, Ram, and Vivek (representing PM, and sometimes Development) about the user and business requirements we were trying to accomplish through the new Marketplace, occupying various sections of buildings at SAP Labs’ Palo Alto campus, covering walls with sketches and Post-Its, and spending weekends in office sampling multiple pizzas, in the process.

Building on Vishal Sikka’s vision of a thriving marketplace akin to the famous Jemaa-el-Fnaa at Marrakesh (Morocco), we brainstormed various analogies that could be drawn between that ancient physical marketplace community, and our modern digital one.

Update: In an online broadcast a few days ago, Vishal Sikka and Jonathan Becher (Chief Marketing Officer, SAP) emphasised the importance of the Marketplace and counted it among four key pillars that define SAP’s new cloud strategy. There is press coverage about this on ZDNet, and you can watch the session here.

Using analogies in creative problem solving is not brain surgery – there is a technique known as Synectics that was developed by William J. J. Gordon in the 1950s (way before Edward de Bono advocated “lateral thinking”) that prescribes the usage of analogies to “make the familiar strange” and therefore release inherent creativity in people. I worked on a board game that made use of non-linear storytelling to teach Synectics when I was in design school – do reach out if you are interested in knowing more.

Before we move on, here is some trivia about the Jemaa-el-Fnaa –founded almost a thousand years ago, it houses several orange juice stalls during the day which then give way to hundreds of food stalls at dusk. It was featured in the Alfred Hitchcock movie “The Man who Knew Too Much” (1956), and is widely acclaimed to be a living spectacle truly worth experiencing.

The Jemaa-el-Fnaa Marketplace in Marrakesh, Morocco: 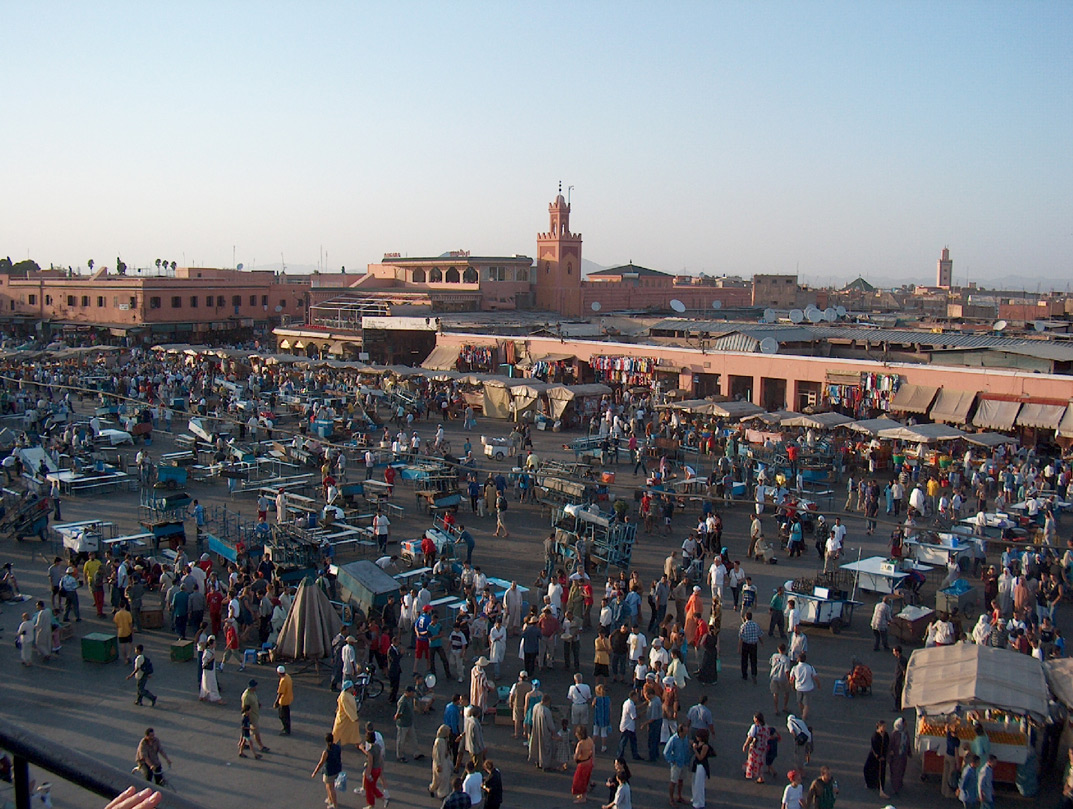 We are done with all digressions. For now.

The result of the brainstorming exercise was the definition of a problem statement that is best illustrated by the word cloud below. The words in uppercase in light grey describe what Tina and her ilk would like to do on the Marketplace, and the words in lowercase in dark grey are attributes that define Tina’s expectations from the Marketplace.

Cutting through the haze to define a problem statement cloud: 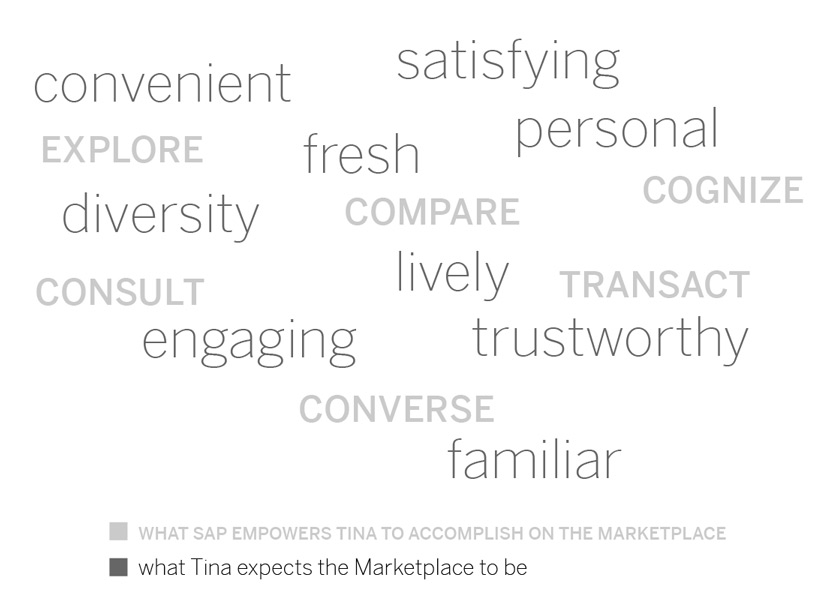 I would entreat you to not doubt what I’m saying in this paragraph simply because it happens to fall under a cloud. We set about ideating upon what this new Marketplace experience should be. We had several ideas (some of which were quite wild!), but finally arrived at a set of prioritised game-changers – strategic, innovative, differentiators that would upliftingly transform Tina’s experience on the Marketplace, and SAP’s fortunes thereby.

Currently, SAP has multiple disconnected shopfronts on the Internet (someone counted up to 16 of them!). There is the HANA Marketplace, the SAP Store, the SAP Partneredge site, SAP Training site, and also an SAP Press site, just to name a few. We dreamt about creating a one-stop SAP shop, which would be the new face of www.sap.com. It would integrate the SAP community, and the various shopfronts we just talked about, into a single comprehensive portal that would cater to the requirements of not only Tina, but also solution sellers (partners) who want to sell SAP consulting services, ortraining – a marketplace for all things SAP, if you will. Tina would not only be able to shop for applications but also training, services, or support, and have the option of purchasing an entire SAP solutions package, comprising all of these, in one place.

One company, many shopfronts: 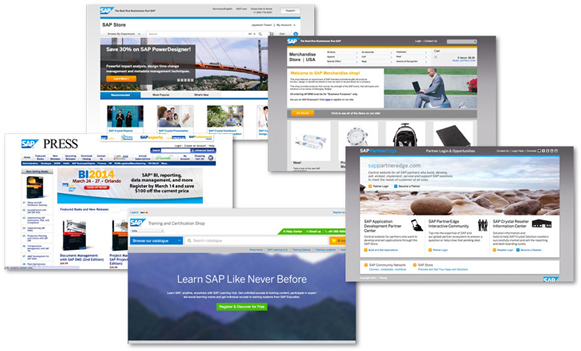 The SAP Community Network has more than 2.8 million registered users and is a thriving community of SAP professionals and a vast, growing SAP knowledge repository. Or user research told us that B2B buyers routinely (32% of them vouched for this in a survey) consult product experts for advice and recommendations, most of whom are active on SCN. Communities can generate as much as 25% of site traffic according to Forrester Research, and additionally, a report published by McKinsey informed us that users who used community features were twice as likely to buy, and also twice as likely to remain loyal customers, than those who did not. The second game-changer, without any doubt, was to seamlessly integrate the SAP Community into the new Marketplace.

We wanted to capture some aspects of the human dynamics from Marrakesh in our new Marketplace experience. We drew an analogy to a shop-owner in Jemaa-al-Fnaa who remembers Tina, converses with her jovially, and shows her exactly what she is interested in.  We pushed the envelope a little further – what if the shop-owner not only remembered Tina, but also her household? Not in a creepy, stalkeresque way, if you know what I mean.

In the context of the Marketplace, this would mean we remember Tina and also her company. ACME Inc has been a long-standing customer of SAP, and we could leverage our transactional history with them to predict what products or services they they might need in the future. A tailor-made experience for Tina and Acme Inc.

A personalised shopping experience for Tina and ACME Inc! 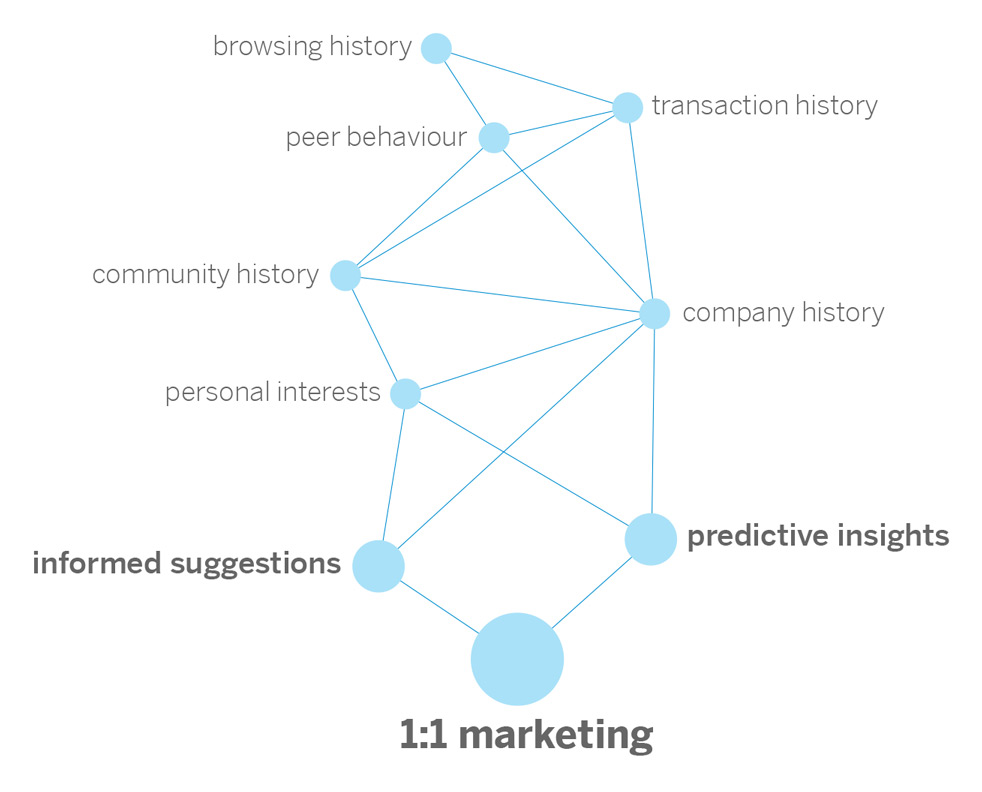 There is something known as a “purchasing gap” in a B2B buying process – it is the distance measured in space, time, and number of people involved, between the epoch at which a product is selected for purchase, and the epoch at which it is ultimately purchased. I just coined that definition and tried to make it sound philosophical, but I am hoping you get the drift. As mentioned earlier (Part One), there are many roles involved in this process, and Tina is one of them.

Here are some stats:

28% of all B2B transactions involve more than 5 decision makers

Thus, the fourth game-changer is to introduce inbuilt collaboration for easier buying decisions. 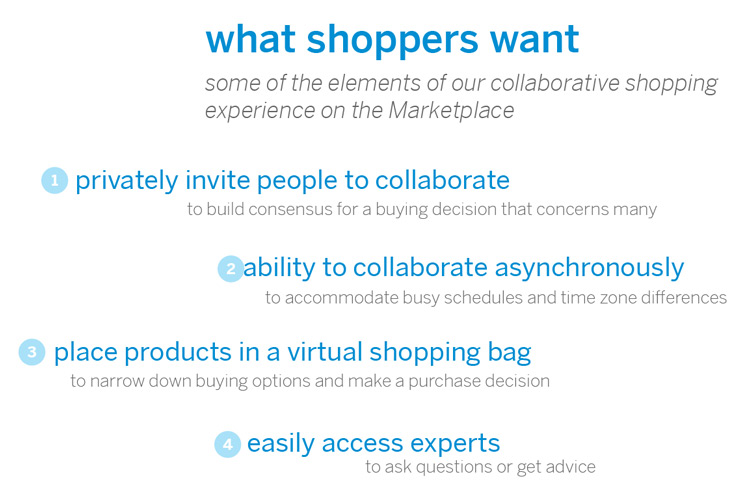 SAP already has a humongous user base. How about introducing an unobtrusive avatar of the Marketplace into Tina’s existing solutions that gives her an opportunity to discover applications, add-ons, services, and training that can make her more productive and valuable to ACME Inc. Of course, the challenge here is to ensure that any such manifestation of the Marketplace shouldn’t be intrusive at all, and should ideally sense Tina’s context. As an example, visualization add-ons for Lumira built by SAP and partners could be made available for download/installation from a Marketplace widget within Lumira.

Watch out for this wireframe in Part Three.

This is more of a necessity than a game-changer. Tina, as an individual consumer, is just like you and me. She expects an exceptional experience while shopping on her favourite sites like Amazon or Zappos. She sees no reason why a B2B shopping experience needs to be any different, or inferior even.

For long, B2B e-commerce sites have languished, bereft of much-needed design love and attention, and have remained utilitarian at best. But the wave of consumerisation is sweeping aside this archaic mindset. Tina is familiar with B2C e-commerce metaphors like shopping bags and checkout flows. She expects personalisation, reads (and sometimes also writes) reviews, and does not want to waste time foraging through nested hierarchical trees looking for products.

According to the Oracle B2B e-commerce Survey 2012, “B2B organisations are not just talking the talk, they are also walking the walk and adopting B2C commerce best practices as a way to drive revenue and market share. 80% of respondents agree that customer expectations have changed due to B2C retail practices.“

At Myntra, I spent a fair bit of time trying to understand and incorporate state-of-the-art UX best practices for B2C e-commerce. It is no coincidence that some of those have trickled through into the redesigned Marketplace.

Instead of creating a (boring!) slidedeck to communicate and share the game-changers we had arrived at, we opted to sketch them out on sheets of paper, and these became our first (raw and organic!) design deliverables. These were shared with stakeholders across geographies. As a side note, the awesome Edward Tufte has compiled some scathing criticism on – and excellent advise on how to improve – Powerpoint presentations. Read more here.

Coming soon in Part Three – Framing the Wires – anecdotes of the latter part of the design journey, featuring a Darwinian evolution from paper prototypes to wireframes to high-fidelity mockups. Apologies for not including graphic gustatory descriptions of the pizzas consumed during the process.

Please share your feedback and comments below – I’m looking forward to hearing from you!

Also loved the paragraph of Ux - PM nexus, hope to do joint products from SAP Labs India for the world 🙂

You have made an astute observation regarding the orange juice sellers at Jemaa-el-Fnaa - we actually drew an analogy between this and an abundantly available commodity on the HANA Marketplace - will be talking about this in Part Three.