First, Bob profiles radar charts, which are great for visualizing values in a shape similar to a spider web. Bob discovers which lines have the highest sales revenue by choosing the sales revenue measure for the Y Axis and line attribute as one of the radar branches. When Bob adds a second attribute as either the legend color or legend shape it will overlay the original data with various colors and shapes respectively for each individual element of the attribute. Bob notes that radar charts are excellent for showing outliers or commonalities.

Next, Bob examines box charts, which are great for the deriving quartiles for certain value ranges. Box charts must have one measure and multiple attributes. So Bob adds the sales revenue for his measure and State and year as his attributes. Bob’s box chart now lists the maximum, minimum and average yearly sales revenue per state as well as the 1st and 3rd quartile. The 1st quartile is the middle number between the smallest number and the median of the dataset, the 2nd quartile is the median and the 3rd quartile the middle number between the median and the highest number of the dataset. Box charts are also great for identifying outliers.

Bob next shows how to create waterfall charts. Waterfall charts visualize the accumulative effects of sequentially induced positive and negative values of data. Waterfall charts are also know as flying brick charts, Mario charts, and/or bridge charts. It is best to depict events that are sequentially related on the X-Axis of a waterfall chart. So Bob drags the year attribute onto the canvas as the X-Axis value and chooses sales revenue measure as the Y-Axis value. Next, Bob adds the quarter attribute to display 12 ascending bricks of various heights, which represents the amount of accumulative sales revenue by quarter for the past three years.

Bob goes on to explore the tag cloud visualization, which displays data as words of varying sizes and colors. Bob creates a simple tag cloud with the product line attribute as the words and sales revenue as the words’ weight. Bob also shows how to rank values in the tag cloud.

Next, Bob profiles tree charts. Tree charts are great for visualizing relationships between certain attributes. Bob displays how each product line is related to different categories. Bob notes that tree charts can only go one level deep. Using the same pair of attributes Bob quickly profiles a network chart, which depicts the relationship between the lines and categories attributes in a different manner.

The next visualization Bob explores is the funnel chart, which is normally used to represent the potential revenue of each stage of a sales process. Bob visualizes the sales revenue per product line to showcase how a funnel chart depicts data.

The last visualization Bob profiles is the parallel coordinates charts. Parallel coordinate charts look for lines between the axes that represent the values of different measures. The closer to flat the lines are the more positive the relationship between the two dimensions. Bob visualizes the measures of sales revenue, quantity sold, and margin in terms of the State attribute. Bob discovers that a relationship exists between all three of the measures because his chart displays all straight lines. 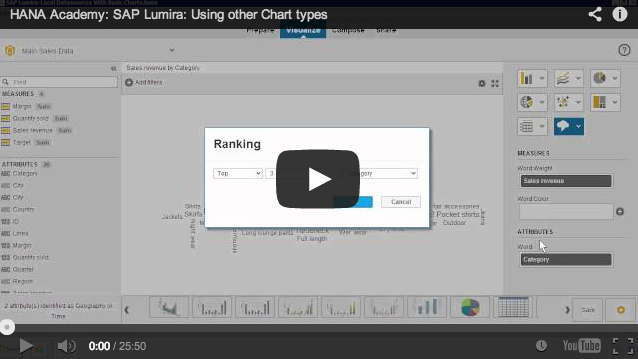 Hi,
i am trying to develop waterfall chart extension for lumira in SAP Web IDE ,As i am new in this tool can you help me with this ,or if possible, you can share the code and steps,that would be very helpful.