SAP provided an ASUG webcast on the Internet of Things (IoT) late last month.  Below are my notes.

It is the “4th” Industrial Revolution

We still discuss Machine to Machine (M2M); this is a subset of IoT according to speaker

M2M is faster than IoT

IoT is a superset of end to end

The third industrial revolution was the electronic revolution

The speaker said it was a progression, going from an Internet of Content from the 1990’s

The next generation is IoT where the devices become smarter – devices talk to each other, smart agents and start make decisions ahead of us

The pace of change is accelerating

There is an explosion of the number of devices connected to Internet.  As an example, cars have Bluetooth built in and remote sensors.  Insurance companies that allow you to upload information to them from their car will give preferential  treatment on insurance and how are hard you break.  Anything you can put a sensor in, pull data from, and connect data to where it needs to be. 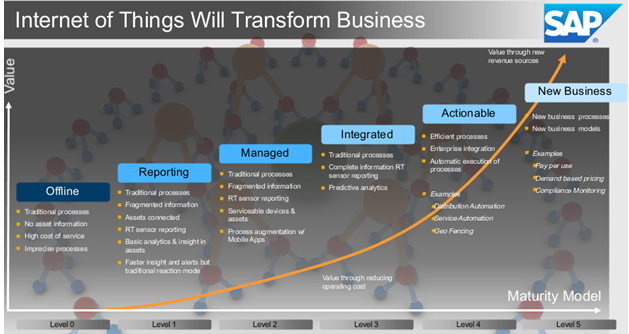 Figure 3 shows the phases of IoT

Predict changes in the near future

Devices will integrate and speak to other in intelligent ways

Actionable stage will be warn us 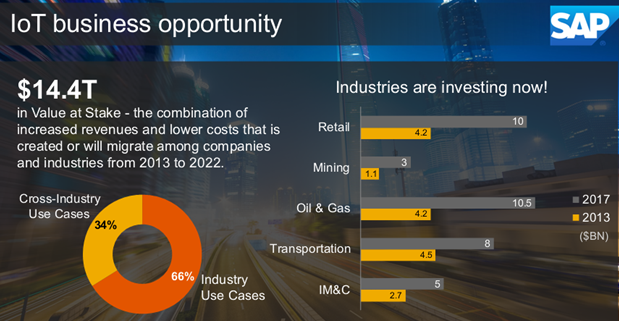 McKinsey and other organizations say $5T to $25T impact

It is a major business opportunity affecting impacts of every business

SAP is looking at areas of businesses that are responsive to technology, such as responsive supply chain (RFID chips as prices are falling)

Feasible to have smart cars that are driverless, which are legal in California

Look at business processes that will be responsive to technology, such as responsive supply chains, a Google car that drives itself

Cars talk to each other; break at the same time

What does this mean? You can fix something before it fails with improved asset utilization.  You can have remote maintenance and service by predicting maintenance conditions. You can detect wear and tear on devices

Connected asset management is being used where the ability for wind turbines to talk to each other and monitor changes to conditions in weather.

See what is happening

The Oil and Gas industry exploration is getting smarter about process of exploration with more sensitive sensors.  With storage you can monitor the usage of resources, pipelines pressure and the impact on each other

IoT is a superset of end to end technology 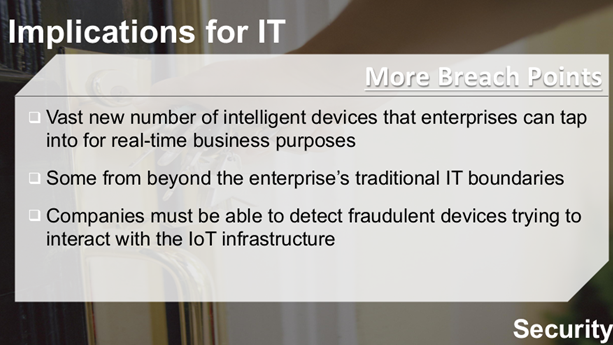 Figure 6 shows IT implications.  We have been hearing a lot about Big data

Speaker was at TDWI Las Vegas.  The big data projects a few years ago were  mostly about customer experience,  sentiment analysis

IoT will be the “killer app” for big data.

Security will be the number one concern.  It would be easy to take over a business by taking over a sensor and change the values. Security walls will have to reach out to security apps. 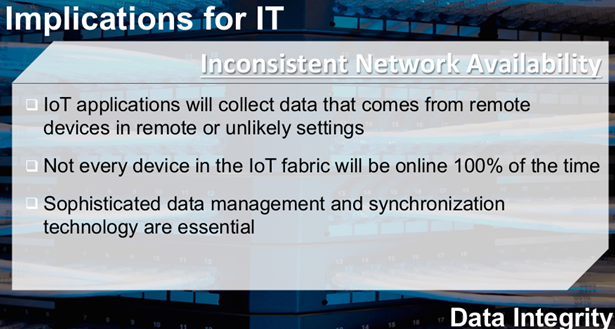 As sensors and actuators integrate have to realize the devices are not always connected.  Connectivity becomes less reliable.

Logistics companies are embedding SAP technology to collect the data offline and when online feed the data back. 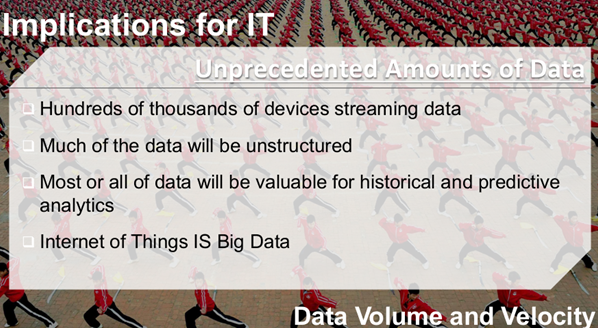 New Big Data projects are more about IoT.  It is a dramatic shift in a short space of time, said the speaker.

It is moving from tweets to devices, said the speaker.

If you have a thousand sensors, the amount of data it is creating significant.

One plane can generate TB of data.  The amount of data is astronomical and big data and IoT will merge into a single project.

Look at how information is being handled 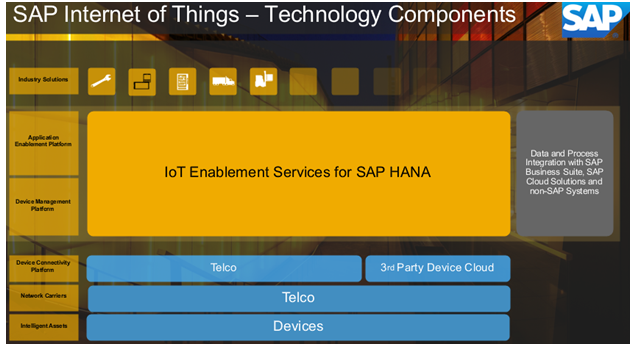 Understand the difference between data and events and we have a long ways to go to explain the difference.  This is key to the technology you choose.

HANA is a core piece.

SAP doesn’t have an end to end solution but will partner with others to deliver a solution.

Business process side of SAP is looking at impact of IoT. 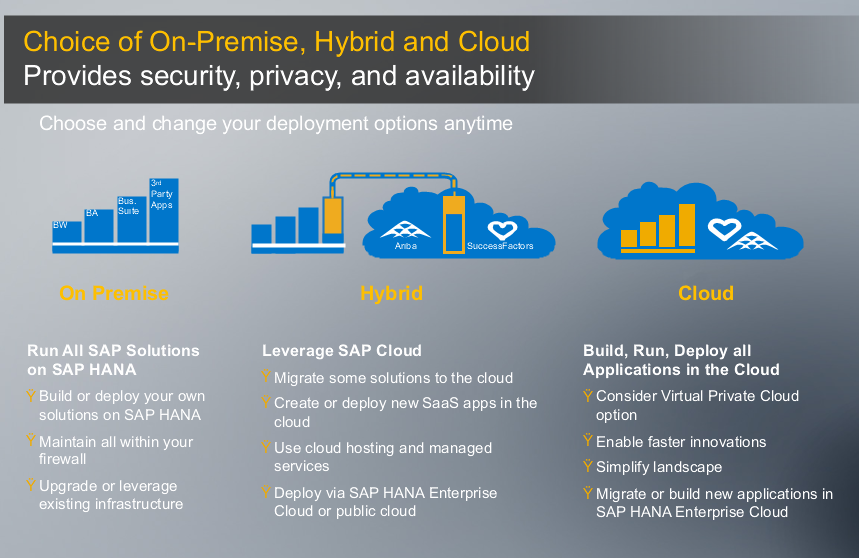 The delivery mechanism could be any three shown in Figure 10 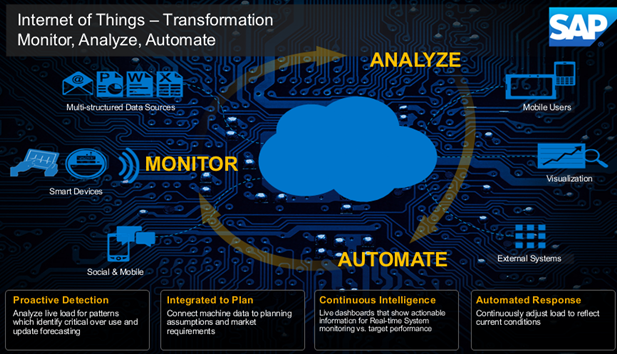 How to take next steps and learn

SAP feels it has a suite of technologies designed for IoT projects; filling holes with partners

Q: Can you site an example where SAP engaged with customer, what did infrastructure look like?

A: Information is still under wraps; they are pilot projects

Q: Does SAP envision IoT data going into BI, ERP or some other dedicated new product?

A: Good question; data will go into an existing infrastructure; not creating new technology; combining technologies at the moment.  SAP will evaluate going forward.

Q: There is already similar functionality available for machine data collection for Plant Maintenance, as an example.  Is this a possible starting point for further development?

A: Yes; he has seen an early PM IoT where a Facebook page would be created for an assembly line the workers would have a smart phone to post to that FB page information about that device.

Another application to monitor employees in a hospital where employees are caught not washing their hands (privacy).  Another company monitors employees with their corporate badge

Q: Is SAP partnering with others and if so who?

A: Telcos, device manufacturers to pick up this information; working at industry level.

Q: Is there an SAP module providing CEP?

A: Event Stream Processor – a separate processor or buy with HANA

SAP is integrating those two products

Lessons Learned from Google’s acquisition of Nest: Is SAP missing an opportunity with hardware start-ups? by Richard Hirsch

SAP’s Steve Lucas is the keynote address later this month at BI 2014 “Creating the Innovation Factory”.  IoT sounds like it will be covered there