If you wish to knock out some of the applications in the team view application heirarchy and customize it as per your requirement, then here is how you do it. It was a bit trickier than envisaged, spent more than sufficient time to figure out and hence sharing with the community.

As most would be aware after Ehp4, SAP has done away with the home page framework and brought in customizing possiblities through launch pad customizations and application/component configuration of Web dynpro applications.

So here is how the application hierachy looks before customization.

Now, if I have to remove some of the applications like Personnel File, Time Management ON Behalf of Employee, etc. then follow the below steps to achieve the result.

As a first step, go to transaction LPD_CUST and then clone your MSS role to ZMSS role. The best approach here is to first create ZMSS role and then copy the required applications from the MSS role.

Click on the copy from other launch pad and then chose MSS EMPLOYEE_MENU. Copy the required applications/folder to the ZMSS.

Now after copying form MSS I have now created my required ZMSS role as seen in the screen shot below. 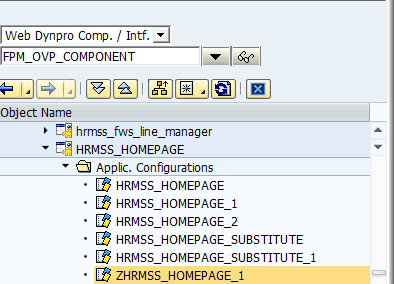 Now change the role to ZMSS in the application configuration parameters.

it is time to change the PFCG role, as a best practice only work on the clone Z roles and do not change SAP standard roles. Change the applocation config parameter of the Web dynpro application HRMSS_HOMEPAGE to ZHRMSS_HOMEPAGE_1. 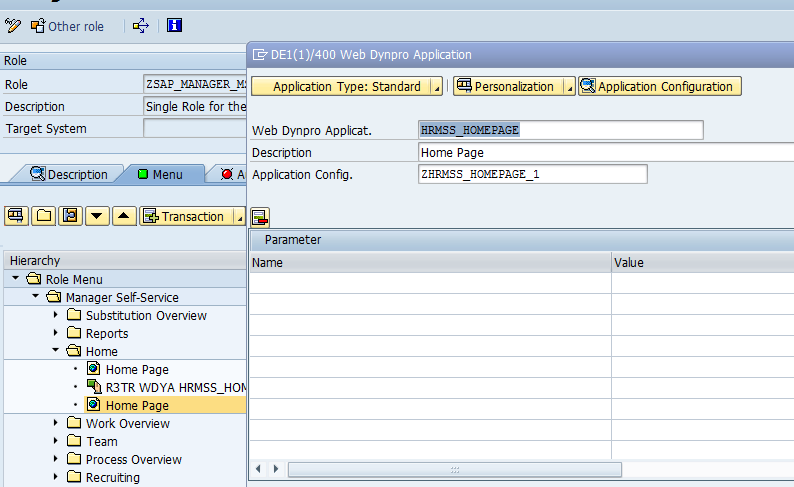 One would imagine this should accomplish our task, but unfortunately this does not work. Even though we have assigned the ZMSS role in the configuration and changed the MSS roles.

The Flash application apparently picks up the lpd related config from a different source than expected.

So as a final step we need to change role column entries in the the table THVNAVLPDEVENTS through the view maintenance V_THVNAVLPEVENTS.

Once you have change the Role column entries from MSS to ZMSS you are done, the hierachy now reflects in the team page 🙂 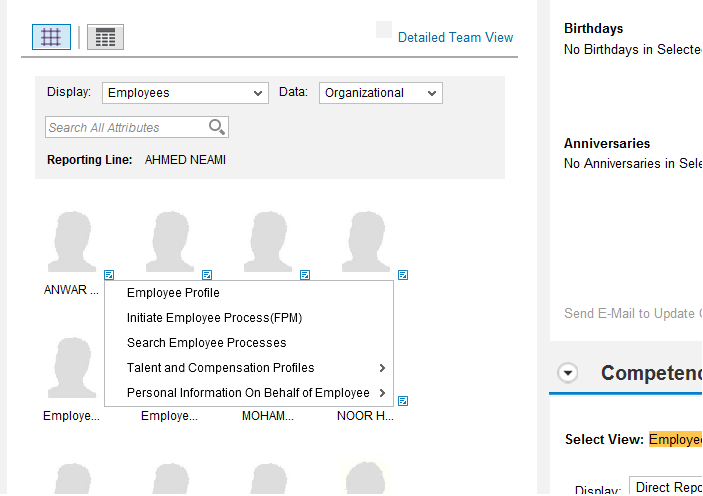 May be this is not the perfect approach, but this the way I found 😉 .

Thanks for reading the blog and hope this is useful.

Your comments and ratings are an inspiration.

Yes you are right about the first point, but I did not want to tamper the standard MSS role.

I am not aware of directly hiding in Portal, you mean by personalization?

This is a different approach, appreciate it.

My approach was making the standard & Instance a Z copy and assigning them in Organizational Chart Visualization configurations.... 😉 .

Would like to know if all the above mentioned steps apply even if we use Enterprise Portal(EP) instead of NWBC? What I would like to know is, Do we need to change anything from the EP side, when we want to customize the Teamview application hierarchy?

can you please tell me how can I hide 'time management on behalf of' option for particular sub group. This is urgent requirement from my client