During large SAP Implementation project, which happens by consolidating one or more SAP and non-SAP systems, there is a high possibility of same material master and vendor master to re-appear in the target system with different names and details. Incorrect master data leads to various issues like incorrect reporting. This whitepaper addresses the issue of duplicate records and provides solution on how to eliminate them. This whitepaper delves into the advantages of de-duplication, explains the process steps to execute de-duplication along with information on fields which should be used to pick the duplicate records, suggests the best team structure to manage de-duplication projects and provides a guide explaining the common pitfalls and the mitigation plans while executing de-duplication projects.

There are several tools used in de-duplication projects. The capabilities of such tools are not discussed in this whitepaper.

The aim of this whitepaper is to provide key information of the de-duplication process which could be followed in SAP rollout and implementation projects. 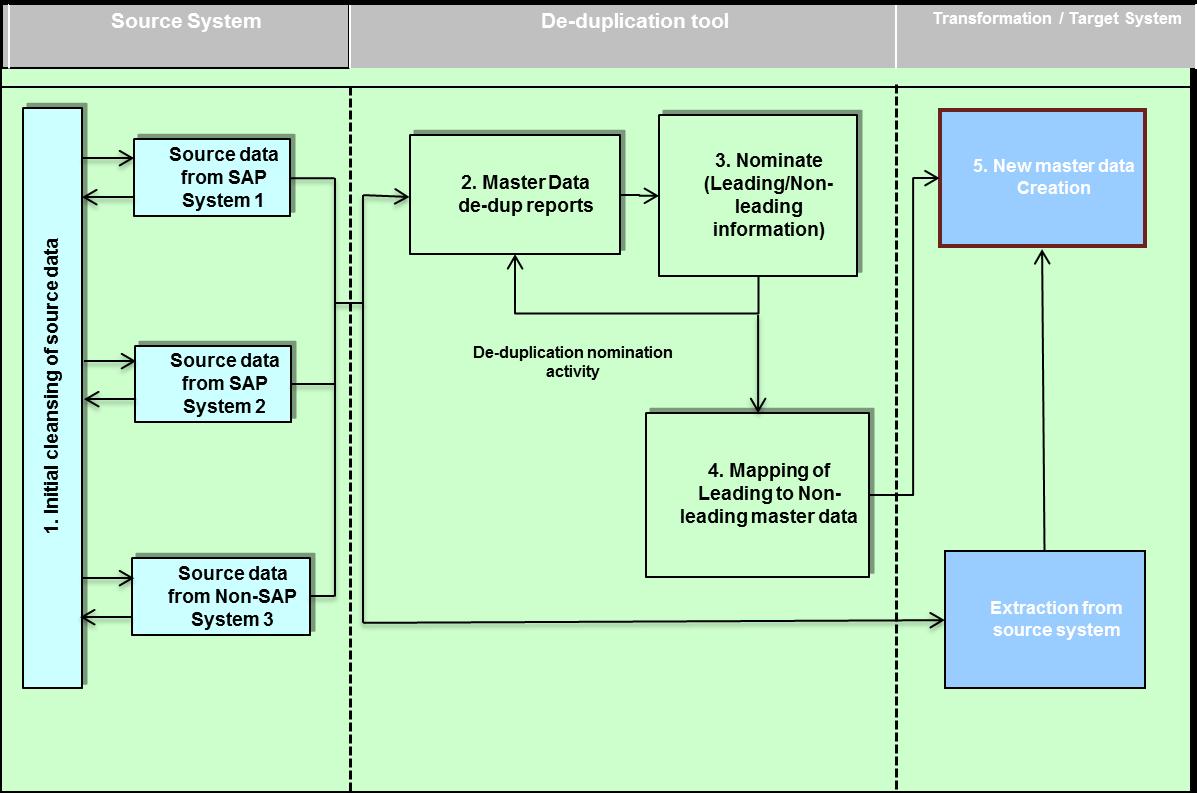 The advantages of executing de-duplication process during rollout/implementation projects are listed as follows:

De-duplication process gets executed as described in following steps:

The scope for de-duplication of master data comprises all the master data in the source systems except those which would fall under one or more below criteria:

b.       Vendor master data which are not created at company code level but created only at purchasing organisational level for different purposes

c.        Master data which cannot be migrated to target system due to non-availability of mapping values on important fields like unit of measure in material master

Few examples of initial cleansing of source master data are as follows:

a.       Correct the material master with dummy text

c.       Update key details used in de-duplication logic which are missing in the material and vendor master data

Important fields which are focused during initial cleansing or enrichment within source system in material master and vendor master are as follows:

The criteria used to determine the group of similar master data would depend on many factors like the availability of data, level of initial cleansing done, scope of enrichment performed within source data, etc.,

a.       Same manufacturer and same base unit of measure

Predominantly the details would be concatenated and text comparisons are performed in order to arrive at the similar master data groups.

Likewise, some of the rules used in vendor master de-duplication logic would be as follows:

In the above example the de-duplication logic has worked on the source system data and grouped these three materials which are of similar nature.

Once the grouping of similar master data has been done, there is need to select the material which should get migrated into the target system.

In the above example, refer to the column ‘Vendor part number’. The same part number provided by the same manufacturer was created in two different systems in three different ways. Hence text search logic like normalization of the text (removing the special characters to determine the actual text) should be implemented to determine the duplicates.

The selection of leading/non-leading material is a manual activity which should be guided by few principles as follows:

If a group contains master data from two different systems, then there is conflict of which system specific master data is given first preference to be selected as leading material. Here normally the thumb rule is to have the oldest system master data which has the updated information to get the first preference. The other approach would be to select the master data which has most transactional data. This issue becomes complex (during the selection of the leading material) when the different systems are owned by different internal organizations. Normally the de-duplication process should be carried out centrally with central co-coordinator to mitigate conflicts arising out of selecting the leading material in the groups.

All non-leading (child) vendor’s company code/purchasing org/plant will be extended to the parent vendor in the target system.

Impact on the transactional data migration

De-duplication project involves lot of coordination between different owners of the source systems. Usually in projects staggered across geographies, there would be separate team responsible for each company code relevant master data. In all such scenarios, there should be de-dup coordinator in each location who should liaise with other de-dup coordinators and the central de-dup coordinator. The master data organisation should provide the high level governance. It is beneficial to position central de-duplication co-ordinator centrally across geographies.

Pitfalls and the mitigation plan in de-duplication projects

The common pitfalls and the mitigation plans in de-duplication projects are as follows:

This whitepaper discusses the de-duplication process during the initial stages of rollout/implementation projects. However once the parent master data is identified and the new master data are created after eliminating the child duplicates, it is imperative to have defined approach to avoid duplicates further in the target system. There could be single source for master data creation and changes along with effective rules & processes to prevent duplicates at source.

Its a long case material and of course everybody knows how theoretically de-duplication works but the question asked was not written here. "Is there a De-Duplication program in SAP and what's the transaction code for this and the procedure how to use it"?