Creating a Dashboard with “From” and “To” month combos

The first order of business is to create a query that returns all the months that are greater than a given month. We do this by using an input variable to get the given month on a selection within the key figure structure of the query. We then calculate the “greater than” restriction in a user-exit variable in the characteristic restrictions for the query.

3. Then create a user-exit variable for 0calmonth and use it in the characteristics restrictions panel for the query . The code for the variable is presented below. 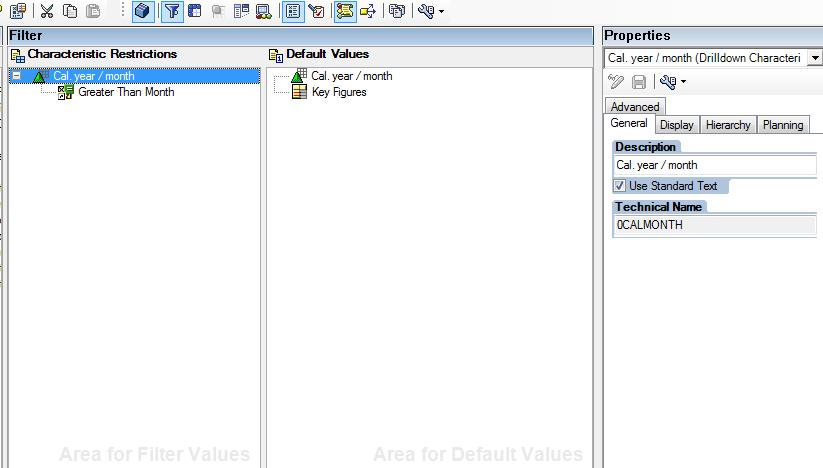 Linking the data and spreadsheet calculations

Create data sources for the “from” query, the “to” query and the query for the affected component. Link the result (“Cross-Tab data”) for each query to a place on the embedded spreadsheet.

Once you’ve linked the data to the spreadsheet,  use the combos’ “insert selected item” function to put the selected value in a cell in the spreadsheet (I usually use the cell above the results, and color it).

You might also want to hide the “0” value with an additional formula:

Make sure to link the final calculated value for the result of the “from” query to a variable in the data connection of the “to” query:

Link the cell with final calculated value for the months range to a variable in the data connection of the affected component.

This may sound counter-intuitive, but at least in my case using the cell with the range created a BEX error regarding a missing value for a mandatory variable (while none of the variables are, in fact, mandatory). This will also work because any change to the “from” value will automatically refresh the “to” value as well. As a bonus, this creates a nifty effect where the range between the selected values in the “from” and “to” combos is always kept the same (that is, 01.2009 – 12.2009 becomes 01.2010 – 12.2010 when you change the from date).