First, Bob recaps the bar, line and pie charts he created in the prior lesson. Bob will use the same data set to create more complex visualizations in SAP Lumira.

Bob starts by dragging the sales revenue measure onto the canvas of a bar chart to set it as the Y axis measure and then selects the top level of the geographic hierarchy, default (Geography_City), as the legend color attribute.  Next, Bob drills into the lower level, region, of the geographic hierarchy by right clicking the sales revenue measure on the canvas and then choosing the drill down option that pops up. To drill even further down a user can right click on the subregion (in this example it’s the US State of Texas) and choose the drill down option. Users also have the options of filtering and excluding any attribute they right click on in the canvas.

Bob moves onto to examine geographical charts. Bob stresses the importance of making sure that the cities in the dataset match SAP Lumira’s definition of those cities. This can be handled by clicking on the edit reconciliation option of the hierarchy to make sure that all of the options have been found and are not ambiguous.

With a Geo Bubble Chart selected Bob adds the sales revenue measure to the canvas and then adds his hierarchy as the geographic dimension. As a brief aside, Bob explains how to change the formatting of a measure by choosing the display formatting option. Next, Bob drills down from the world map to show the bubble representations of the sales revenue for the various US States. On the right hand side of the canvas the maximum, minimum, and average bubble size is depicted.

Next, Bob examines the same data in a Geo Choropleth Chart, which visualizes the data by coloring the different states in various shades of green with the darkest green representing the highest revenue and the lightest green representing the lowest revenue. The Geo Choropleth Chart offers the option of using a Trellis, which Bob displays by quickly creating three side-by-side charts for the sales revenue per state by year.

Bob goes on to showcase the Geo Pie Chart, which is very useful when a user wants to look at how different slices of data affect a specific region in a geographic hierarchy. Bob divides the pie charts that are laid over the various US States by the line attribute. Users can then quickly drill down by filtering out specific elements of the visualized attribute.

Next, Bob examines scatter plots and mentions how great they for identifying trends and correlations between multiple measures. Bob sets sales revenue and quantity sold as his two Y axes measures to see if a correlation exists. First, Bob drills down to plot the sales revenue and quantity sold by each US State by dragging the State attribute to the legend color. Bob notes the obvious correlation between the measures due to the diagonal line that can be drawn from the bottom left hand corner to the top right hand corner that intersects a majority of the points. Bob drills into the scatter plot even further by selecting the category attribute as the legend shape. Now, the scatter plot is littered with different colored shapes each representing a unique combination of a category and a State. This feature is great for identifying outliers.

Continuing the tutorial, Bob showcases how to create a Heat Map, which compares one measure by two different attributes. Bob visualizes sales revenue by State and the Heat Map depicts the data via the density of the color. When Bob adds an additional attribute for line he creates a matrix that quickly shows where the best line and state combinations exist.

Finally, Bob details how to build a Tree Map, which compares two measures to one attribute. Adding measures affects the weight and color of the various blocks that compose the visualization’s large rectangle. 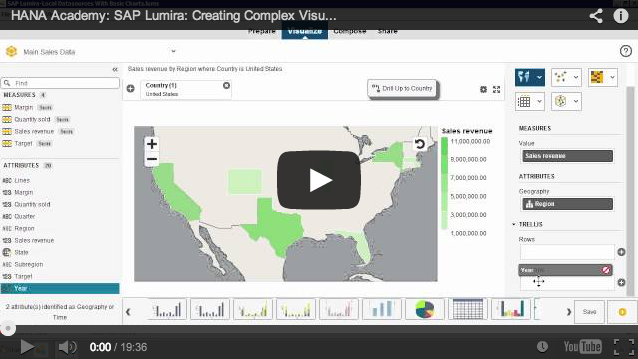