Red Carpet Data, Its Lessons and Opportunities for an Industry [Infographic]

Oscar night is a tremendous business opportunity. More than a chance for fans and media to gossip about celebrities, the 86th Academy Awards Sunday night handed a treasure trove of data to the fashion industry on a silver platter — if not a red carpet.

“Trigger events like the Oscars give designers an opportunity to preview hot, new designs,” Angela Schuller said in SAP News on Wednesday. “But data derived from consumer reactions can help fashion brands predict exactly which fashions will fly off the shelves and which will flop.”

SAP collected and analyzed social media data from Oscar night, such as mentions and sentiment, from which fashion designers and retailers can gain a bigger picture of how their customers responded to styles, colors and more. The data also reveals where critics and the public see things differently.

Five SAP infographics showcase insights that the fashion industry can gain from this type of analysis:

This type of big data is a microcosm of what’s been happening in the fashion industry.

“Attending a runway show … no longer offers an exclusive first look at fashion’s elite,” David Trites wrote in SAP Business Trends last year. “Over the past few seasons more and more top designers and brands have launched new looks online before and during their shows.”

Social media is accelerating the democratization of fashion. And, just like Oscar night, it has enormous potential for an industry to connect with its fans and engage with its customers.

SAP Makes Life Easier for Consumers, Retailers and Designers with My Runway

Timeless Look or Monumental Mistake: Can Social Sentiment Predict the Next Fashion Trend?

Big Data: The Next Big Trend in Fashion 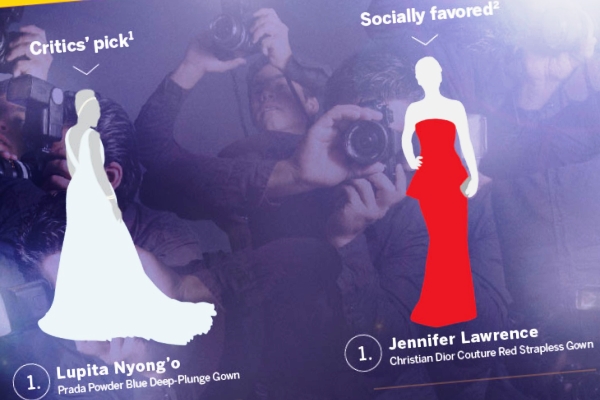