Michal’s PI tips: How to trigger an alert for Component Based Message Alerts (CBMA) via “API” ?

With ABAP stack alerting it was possible to generate an alert using a function module which could be called from many different places (message mapping – RFC lookup, adapter module, abap proxy etc.). like shown in other blogs:

How to raise alerts from ABAP Proxy

For Component Based Message Alerts we currently don’t have an API which would allow trigerring alerts. Does not mean however that we cannot easily create it on our own. In this article I will try to show a concept which shows how to create a simple “API” for generating custom alerts in CBMA.

Create HTTP callable integration flow which will server as an alert service.

b) use a XML structure which will hold all the information details which you want to see in the alert monitoring for example: 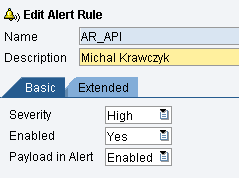 a) call the your ICO via HTTP from any kind of tool (like soapui) and populate the xml with the alert related info. 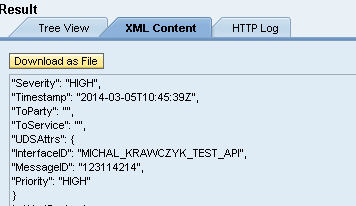 This is the alternative way to be able to receive all kinds of alerts with alert specific information.

How to use CMBA – Michal’s PI tips: Component-Based Message Alerting