Were you ever interested to find out how the Best Picture winners compared to each other and other top movies, and if they are indeed the “best” movie of the year? I pulled some information from Box Office Mojo onto Excel, imported it onto SAP Lumira Desktop and started playing around with the different visualizations. I used the information of Oscar Best Picture winners from 1980 to present and was quite intrigued in the information I was able to find through Lumira.

The first visualization compares Oscar Best Picture box office with the number 1 box office for the years 1980-2013. The bars show the number of wins and the lines show the number of nominations. According to this visualization, only 4 out of the 34 (about 11.8%) Best Pictures are also the number one box office movies. These movies are indicated by green colored bars and are Rain Man (1988), Forrest Gump (1994), Titanic (1997), and Lord of the Rings 3 (2003). In addition, there is a clear difference (over $700 million) in 2009 between the top box office movie and the Best Picture, The Hurt Locker (2009). This indicated that the most popular movies aren’t necessarily the “best” according to the AMPSA (Academy of Motion Picture Arts and Sciences). 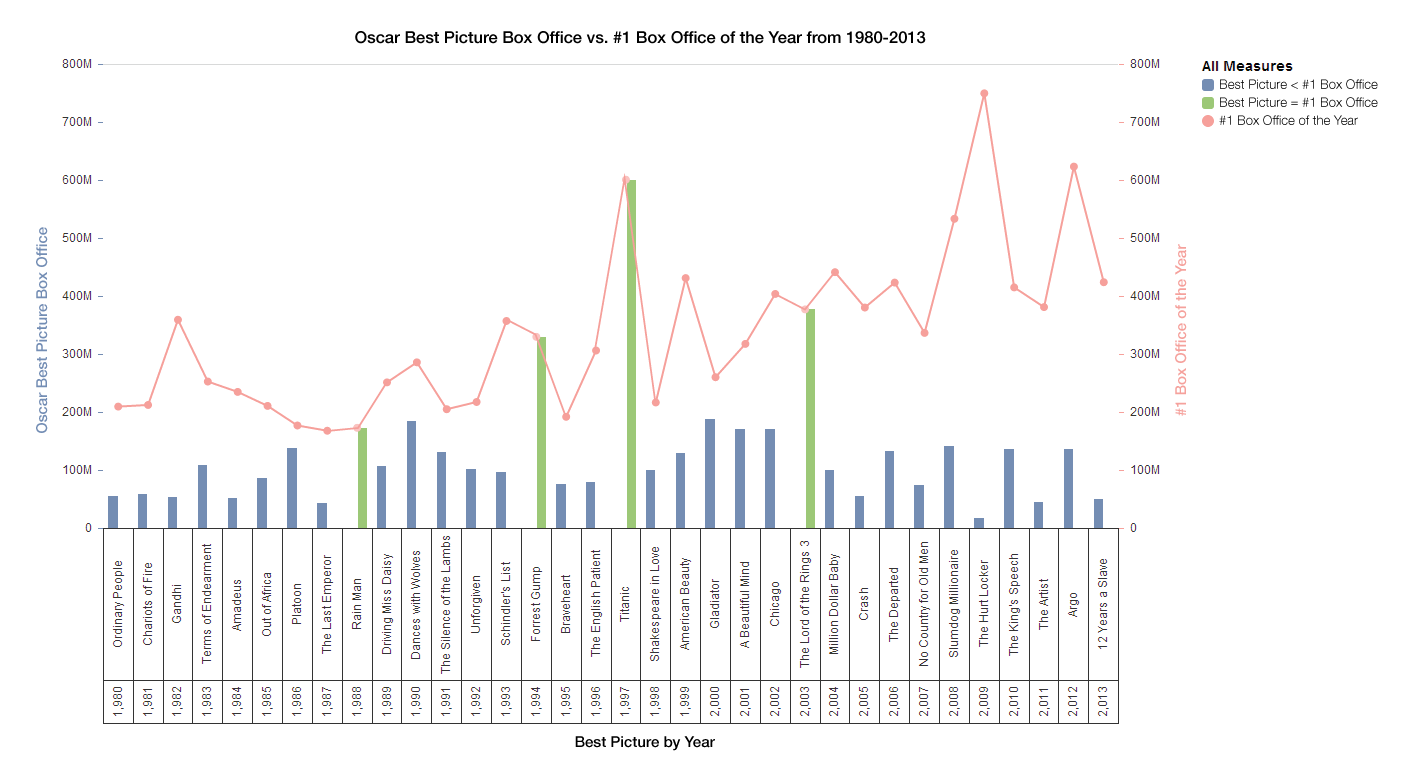 The second visualization shows how many nominations and wins each of the Best Pictures received for the years 1980-2013. The number of wins are represented by bars and the number of nomination are represented by lines. In this visualization you can clearly see that there are only two movies that won all the awards they were nominated for, indicated by green bars. These movies are The Last Emperor (1987) and Lord of the Rings 3 (2003). Titanic (1997) is up there as well. It won 11 Oscars, same as Lord of the Rings (2003), and was nominated for 14 Oscars. Very impressive, especially for Lord of the Rings 3 (2003), when it was also the number one box office for the year. 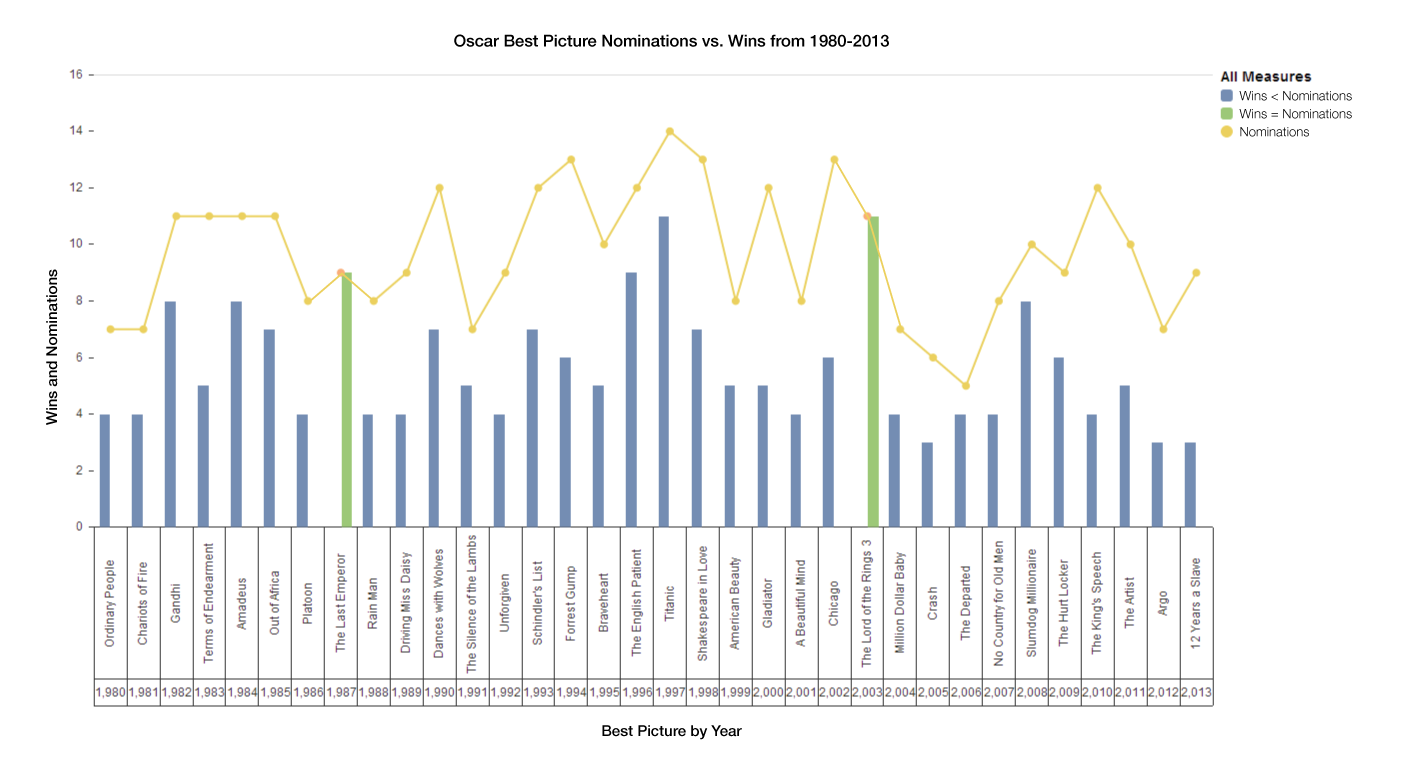 The last visualization shows a breakdown of total box office up to date for each of the Best Pictures. The breakdowns include pre-nomination revenue, post-nomination revenue, and post-award revenue. Movies that are colored purple, orange, and green received more revenue before the Oscar nomination. Movie that are colored red, yellow, and blue received more revenue after nomination. From the chart below, you can tell that about 38.2% (13 out of 34 movies) of the Best Pictures became more popular as a result of the Oscar nomination(s). Movies that are already popular before the nomination(s) include Rain Man (1988), Forrest Gump (1994), Titanic (1997), and Lord of the Rings (2003). Starting to see some patterns here? These movies keep popping up in the visualizations at the top. They must be the best of the best, according to SAP Lumira. 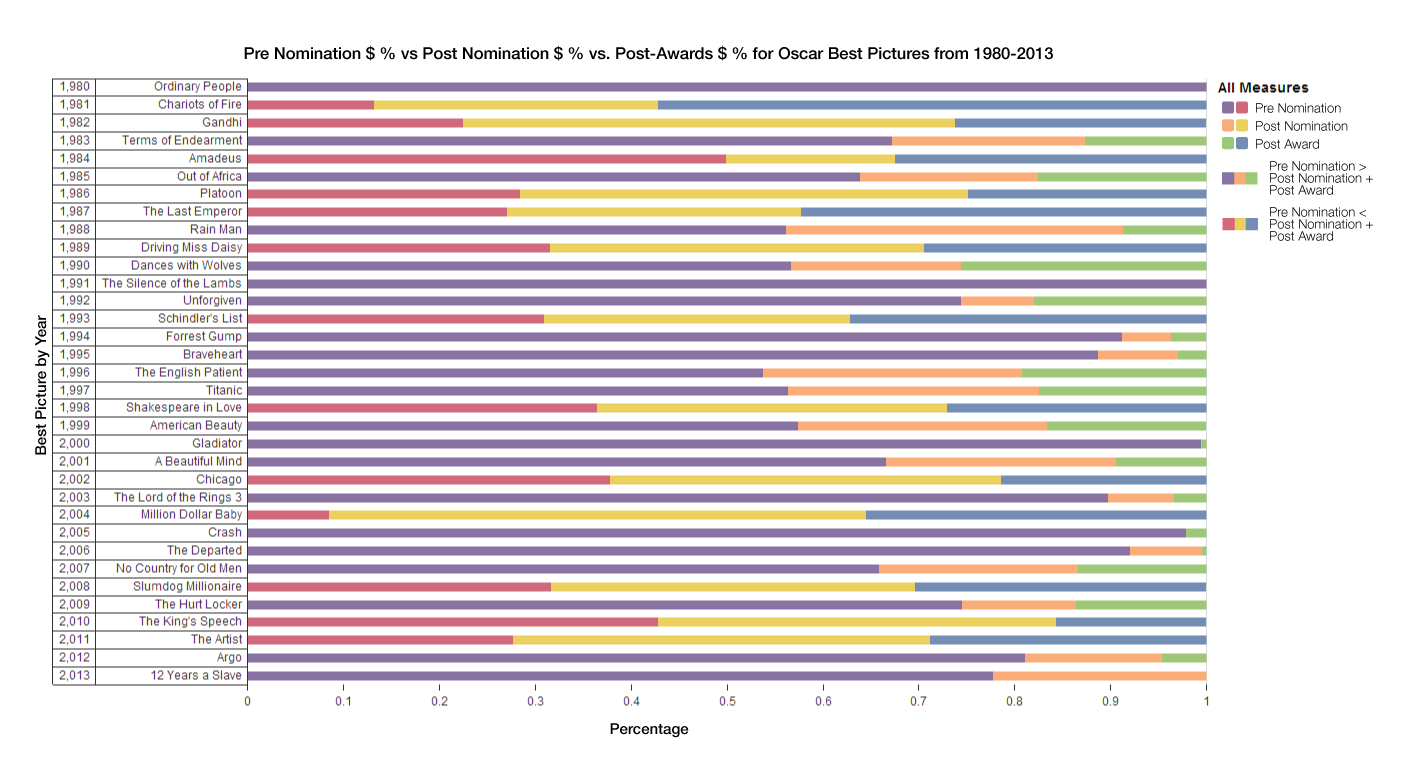 Download SAP Lumira for free and try it for yourself at www.saplumira.com

Great post. The third visualization, specifically, is an excellent example for the kind of original insights a good BI implementation can provide.