One of the best practices I believe in programming is to ease the effort of fellow programmers and oneselves by creating some simple generic objects or tools, so to fall inline I planned to get by hands dirty and made use of my active grey cells to come up with some what crude tools which turned out to be quite useful. Pleased and satisified with my self-proclaimed achievments I planned to put those programs in a common server so that anyone can pick it up. So I used the wonderful saplink tool and uploaded the programs.

Things dont stop here, as only I know how those can be used and what it can or what it cannot do. So where do I convey that, I did not want to enquires to be directed towards  me, so perhaps some good documentation explaining the functionality and usage will do a lot of help. Now, I look at what are the options available to me to make this documentation easily accessible.

To make my life easier, I chose to go with the first one. so here we go,

a. Create a Z table with fields as in the screen shot, the objname should be the name of the program. the content field will store the binary content.

As a second step, we need to create a document upload program.So I built a simple document load program which basicall reads the document in binary and then zip and store it as binary string. Store the file names against the object names and also the file/mime type.

As the next step, build a small web dynpro component with a view with an ALV with a hyperlink to click on the document. Am limiting to the scope of the document and not going about explaining how to create web dynpro component. Ensure you pass the object name and the URL parameter and trigger search function automatically in the component. Ideally, you would not want the search buttons in the component, but this component was developed generically to search for documentation.

And Finally, we come to the last step. A bit of coding in  the actual program.

so this is how it looks and works

On the click of help doc icon, the web dynpro launches with documents already searched from the table we loaded using the load program. And then on the click of the hyperlink you have the document popin up. 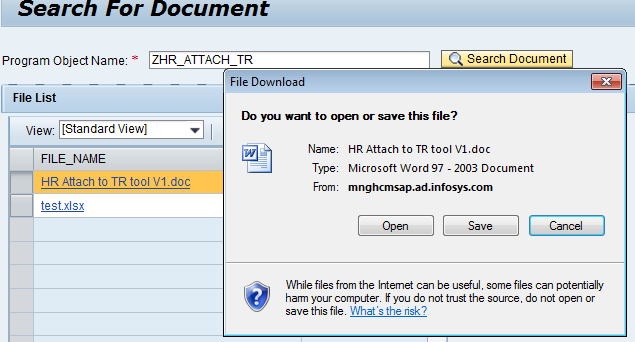 This is a simple approach to have documenation available on screen, nothing geeky about it. Hope you liked this innovative way.

Your comments/ratings are an inspiration to innovate more 🙂 .