This blog offers you a comprehensive and easy-to-use tutorial for developing a hybrid application on SAP HANA Cloud Platform that integrates with an on-premise ABAP system using JCo and RFC. It is a simple example of how SAP HANA Cloud Platform can be used as extension platform for existing SAP systems running on customer side.

The tutorial below guides you through an application scenario that includes

The scenario implements a simple flight booking application based on the well-known SFLIGHT model available as default sample content in ABAP systems [1]. The overall landscape of the sample application is shown in following picture: 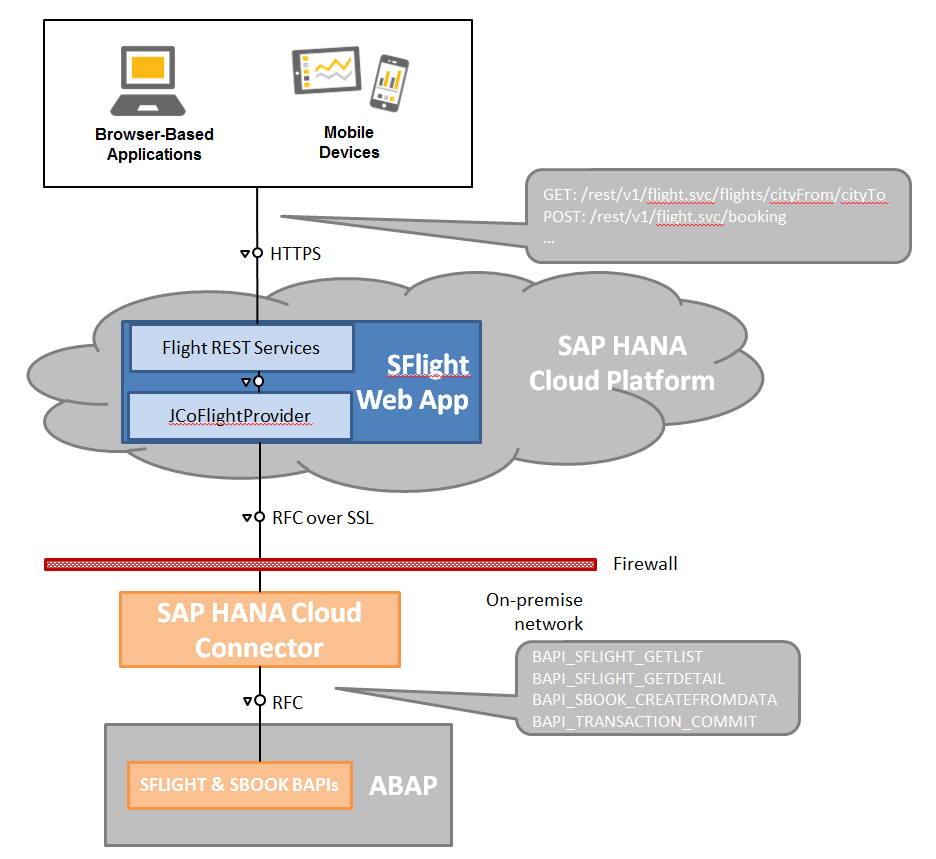 The client consists of an HTML UI, based on SAP UI5, and implements the UI following the Model-View-Controller paradigm.

The client interacts with the Web application on SAP HANA Cloud Platform via a set of REST services, to request a list of flights, to get flight details and to book a flight.

The REST services in the application delegate the actual calls to the ABAP system to a JCoFlightProvider class which in turn uses the Java Connector API to call an on-premise ABAP system directly using RFC.

For the on-demand to on-premise connectivity, a SAP HANA Cloud Connector is running in the on-premise landscape. It has the ABAP system and BAPIs configured as accessible resources which are needed by the SFlight application.

In the ABAP system, the sample data of the SFLIGHT model has been created, and the authentication to the SFLIGHT BAPIs is done with a service user in this example.

If you like to see the application running, start it in a browser (Chrome, FireFox, Safari) with following URL: https://sflightdemo.hana.ondemand.com/sflight-web/

2. Setting up the Environment

If this pre-requisite is fulfilled, you can set up and run the application in your environment. In this tutorial, only the connectivity specific steps are described in detail, the general steps how to set up the SAP HANA Cloud Platform environment and how to import the SFlight sample project into your Eclipse workspace is just shortly summarized here. A more detailed step-by-step guide for these steps are provided in the ReadMe.txt file that you can find in the root directory of the Extensions-005 branch in the github project [0].

You should now have a local HCP development environment set up, and the sflight-web project imported and built successfully in your Eclipse workspace.

2.2 Installing the Cloud Connector and Establishing an SSL Tunnel to Your HCP Account

To make RFC calls from the cloud over SSL, you need to install the SAP HANA Cloud Connector in your on-premise landscape. You can download the cloud connector from https://tools.hana.ondemand.com/#cloud and install it as described here [2].

The SFlight application uses SAP UI5 as JavaScript library for its user interface. Following the Model-View-Controller paradigm of SAP UI5, the UI is built of the two files sflight.view.js and sflight.controller.js which you can find under /src/main/webapp/sflight-web in the Eclipse project.

A screenshot of the UI is shown below. On the right hand side, you find the function names within the sflight.view.js file which implement the respective panel.

The single panels interact with the sflight.controller.js file in following ways:

The UI controller interacts with the SFlight Web application running on the server using REST services. Each of these REST services replies with a JSON response, so that the controller and view are using the sap.ui.model.json.JSONModel to bind the UI to the JSON data. The REST services called in the sflight.controller.js file are following:

The Web application is using Apache CXF and the Spring Framework to provide the necessary REST services. In order to use these libraries, following dependencies are define in the pom.xml of the application:

How to use CXF in combination with Spring is described in more detail here [4]. Shortly summarized, it provides a simple framework to define REST services in POJOs, taking care for all the boilerplate code of receiving and sending HTTP requests for you. It thus allows you to focus on the business logic and makes development of REST services an easy task.

To understand how the REST services of the sample application are implemented, you need to look into the sprintrest-context.xml file located under the /src/main/webapp/WEB-INF folder in the Eclipse project. There, a Spring bean is defined with name flightService.This bean is implemented by the Java class com.sap.cloudlabs.connectivity.sflight.FlightService. Using the CXF and Spring annotations, the FlightService class is a simple POJO which provides the GET and POST service endpoints listed above in section 3. A small code fragment that shows how the definition of the REST service is done is shown below:

5. Fetching Flight Data and Trigger Booking in the ABAP system

The FlightService class delegates all calls to a FlightProvider object which then in turn does the actual call to the backend system. For this, an interface com.sap.cloudlabs.connectivity.sflight.FlightProvider is used that defines the Java methods which shall be performed against the SFlight backend service.

Right now, there is just one implementation of the FlightProvider interface: com.sap.cloudlabs.connectivity.sflight.jco.JCoFlightProvider.
We might add e.g. an ODataFlightProvider in the future to this sample application.

The JCoFlightProvider uses the Java Connector API to make RFC calls directly against an ABAP system. Of course, all the communication is encrypted using the cloud connector and its SSL tunnel. You can use JCo in exactly the same way as you might know it from SAP NetWeaver Java. A tutorial how to work with JCo can be found here [5]. JCo uses RFC destinations which encapsulate the configuration of the ABAP system, and allows the separation of the actual ABAP system configuration from the application coding. The JCoFlightProvider makes use of an RFC destination called dest_sflight. This destination will be configured in section 6.

To provide the result set of the JCo calls in a JSON format, a utility class com.sap.cloudlabs.connectivity.sflight.jco.JCoUtils is used to transform JCo tables and structures into JSON objects. This eases the consumption of the response in the SAP UI5 client.

You should have now a good understanding how the application is structured and what the single layers are doing. Next step is to test the application, first on the local test server, and then in the cloud. In order to do this, the RFC destination used by the application needs to be configured.

You now need to configure a test user for your local server: Double click SAP > SAP HANA Cloud local runtime in the Servers’ view and navigate into the Users tab. Add a test user here and save the changes. This user can be used to log on into the local application.

Afterwards, the RFC destination used by the application needs to be configured:

Now, you should be able to test the SFlight application in your browser, using the URL: http://localhost:<port_of_local_server>/sflight-web. The application should successfully call the ABAP system and display data when selecting cities for which flights exist in the ABAP system (e.g. choose Departure = Frankfurt, Arrival = New York).

6.2 Configure Destination in the Cloud

First, publish the SFlight application to your free Developer Account in the cloud:

After about a minute the SFlight application, running on SAP HANA Cloud Platform, is launched with the external Web browser you configured before.

Now, configure the RFC destination for the SFlight application in the cloud:

To run the application in the cloud, one more step is missing: The ABAP system and BAPIs which shall be made accessible to the SFlight application need to be configured in the Cloud Connector.

7. Configure ABAP System and BAPIs in the Cloud Connector

At this stage, you should have installed already a Cloud Connector and established a connection with your free developer account (see section 2.2 above).

Now you should be able to run the SFlight application in the cloud. The application should fetch the data from your on-premise ABAP system and display the data as in the local test case.

Very nice blog! One question: how does the external web user map all the way back to the ABAP end user?

Currently, there is a system user that is configured in the RFC destination for JCo. But like for HTTP we are working on a principal propagation mechanism for RFC so that the same identity can be used in the ABAP backend as well.

Very nice blog! one thing I want to mention, the properties file submitted as part of this project with destination values is having jco.client.r3name as fli. I guess this should corrected to FLI to match the cloud connector mapping value. 😉

Can I setup the HANA Cloud Integrator in my ABAP stack via SM59 and perform direct calls?