Which country has the highest percentage of women studying computer science?  Would you guess the US? India? Kenya? You’d be wrong.  It’s Myanmar. Sixty percent of computer science students in Myanmar are women.  Women score so well on the tests used for admission there that they’ve in fact had to kick off affirmative action for men.

This was part of an eye-opening world of information brought to us by Ann Mei Chang, just one of the over 30 inspiring speakers at the first-ever Lesbians Who Tech Summit in San Francisco last Friday.

Ann Mei is a former Senior Advisor for Women and Technology at the US Department of State, and currently works as Chief Innovation Officer at Mercy Corps. Her talk was called Women in Tech: A Global Perspective.  Now how many women from Myanmar are on your team? What can SAP and other enterprises do to help? For starters, I’d suggest you keep your eyes open and your minds tuned to the speakers and messages at this one-day summit. Here were ideas and enterprises incubating that you’d probably never considered before.

The room was packed with nearly 800 lesbians in tech (and those who love them) in a refreshing refrain from what has come to be an otherwise all-too-homogenous scene in Silicon Valley.  The first two speakers alone were women — lesbians — of color.

Leanne Pittsford intros #LWTSummit saying even @ LGBT events there are only 10% women at best. Sure great to see this pic.twitter.com/P7kZhlsCiP

You may think “lesbians in technology” is some sort of strange esoteric subset, but the diversity in the room was far-reaching, representing global cultural diversity as well as huge variety in skin color and gender identity.

This diversity leads to a huge wealth of innovation. Some of the upstarts that were striking included the four at the Entrepreneur Pitch:

Aside from the striking innovation and the wrap on women in tech, there was a healthy focus on authenticity in the workplace. Like a colorful ribbon tying the day together, we heard this refrain in particular from speakers such as Facebook’s Sara Sperling; fabulously entertaining Kathryn Finney of digitalundivided; Kronda Adair, a programmer with a “nerd epiphany” (she practices “purr programming” – when you constantly compete with your cat for control over the laptop); and an amazing coming-out tell-all from seasoned executive Lisa Sherman, formerly of Verizon. The rousing mandate late in the day from Summit organizer Leanne Pittsford was no exception, employing us to take risks and “make the world awesomer.” 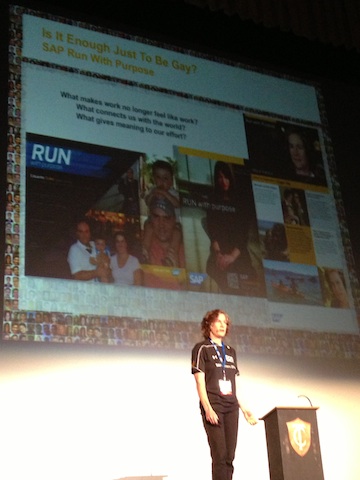 SAP’s own presence was also about being authentic and being the difference. I was honored to host the Ignite lunch sessions thanks to SAP’s sponsorship, during which I not only got to speak, but got to introduce three talented and inspiring speakers.  Here was our session line-up:

It was a true honor to introduce these passionate women.  My talk was about how SAP made “the turn” from LGBT employees being disenfranchised to becoming a powerful and transformative presence for SAP.  You can see presentation on SlideShare here: 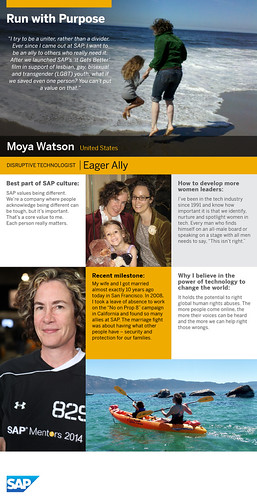 Is it enough just to be gay? The opportunity for LGBT leadership at work from moya watson

I was also pleased to take that opportunity to reveal my contribution to SAP’s new Run With Purpose campaign, which is right in line with the message of how we as employees make the difference for a company’s success — just by being who we are as humans.

After our sessions we were busy talking to many enthusiastic people from different companies, walks of life, and locations around the globe as far away as Jamaica. I was very impressed by the collaborative and supportive vibe in general. The five inspiring social good organizations – AllOut, Astraea Lesbian Foundation for Justice, CODE2040, Chicana Latina Foundation, and National Center for Lesbian Rights – were collectively funded  beyond expectations by the audience (take a look and fund them yourselves). On Twitter, I saw several folks able in fact to crowdfund their whole trips to the Summit, and there was significant buzz around the #LWTSummit hashtag in general.

These are women helping women. Correction: these are women, men, and gender identities beyond, coming together around a powerful wellspring of diversity and innovation – the kind of unbridled purpose-driven energy that will help you change the world.

In short: that “quickening moment,” as best communicated in this quote by Martha Graham, featured in my talk:

I can’t wait for next year.

Very nice, Moya, it sounds like a great event and you did great

I really like the picture of you with your family.  Kudos to you and SAP being involved in the event.

Thank you for sharing this great event with us. Your post conveyed your excitement and passion so that we can all feel your enthusiasm. I bet your colleagues at SAP are proud of you for representing so well.

It is sad to think of all the human potential that has been not fully realized due to people being marginalized by "otherness." Although progress has been made, there is still much to be done. Thank you for speaking out on this issue.

Very well put Gretchen.  Thank you for your leadership and standing up for diversity.  It really does make all the difference for innovation and I don't believe we'd be here without diversity.

I don't know if you realize how helpful this kind of program is to someone playing life on the lowest difficulty setting. The biggest case for diversity is that I don't know everything. I can talk to other people, share experiences and so on, but the challenge is finding people unlike me; I need to hear, listen and understand people who are unlike me. Otherwise similar experiences due to similar lifestyles results similar if not identical world views, leading to similar if not identical answers to my work and life challenges.

The first thing your publicizing this does for me is remind me that there are people who are unlike me, who have valuable lessons due to their different experiences and world views that I would never learn about otherwise. That sounds like a no-brainer, but what does a fish know about the water in which he swims all his life ? By itself, it is personally enriching as a reminder of society and it's diversity.

Secondly, and more importantly, is that 'ordinary' people - not the presenters and speakers and examples you give, but the ones less confident in their own voice, perhaps because of the setbacks imposed on them by their background  - see that people similar to themselves are being heard. This gives them the confidence to speak out, adding yet more to the ideas and solutions and opinions I get to hear.

So, thank you for this work. Every extra person who speaks out because of a program likes this enriches my life.

Hi Martin -- what a lovely, insightful comment. Thanks for taking the time to read and to write this out.  I've heard you talk about lowest-difficulty setting before.  I would of course beg to differ -- I'm sure there are things that make you different and that are a challenge, and maybe it's even worse since people don't expect that from "straight white males" -- but I absolutely agree about the value in learning things someone would not otherwise.

This is a line I will always treasure: "Every extra person who speaks out because of a program like this enriches my life" -- what a gift.  Thank you for the inspiration!

Leads360 is the best real estate marketing companies in Pakistan to generate quick real estate leads for your business.