Apple Inc.’s business model is a fascinating case to look at. A close-up quickly reveals its complexity. Think of its hardware (e.g., iMac, iPhone or iPad), its software (e.g., Final Cut Pro, Aperture or Logic Pro), its licenses (e.g., Apple Store Merchandise, “Made for iPhone” (MFI)-Program), the App-Store etc. And Apple invests a considerable amount of cash flow in the financial markets. 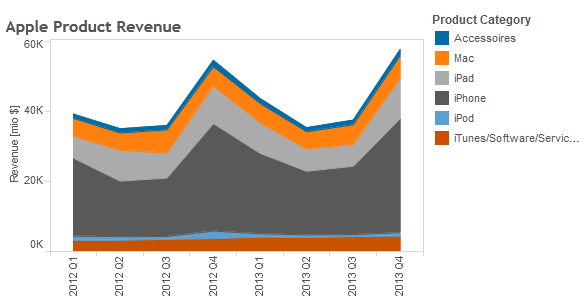 Apple knows more than one way to earn money, and it’s undoubtedly successful: In 2013, Apple generated revenues of about $174 billion, which is a 5.7 percent increase compared to 2012. Apple’s quarterly revenues by product category are shown on the right.

However, the Cupertino, Calif.-based computer manufacturer and seller will eventually face the same problem of market saturation as do others in the industry, despite its strong brand and loyal evangelists. In North America for example — Apple’s home market — the last quarter in 2013 brought no growth compared to the Christmas sales in 2012 (YoY). Accordingly, Apple faces a strong pressure to innovate technologically, but also in terms of revenue sources.

And that’s what Apple is good at.

Recent developments by Apple support that trend. Or what do you think the fingerprint scanner is for? Security, surely. But what security? Jim Edwards’ headline on Business Insider puts it straight: “The Fingerprint Scanner On The New iPhone Is About Money, Not Security.” Through the fingerprint scanner, the smartphone becomes the key to the mobile wallet, according to Edwards. It significantly increases consumers’ trust in mobile payment methods, including app store or in-app purchases, but also payment over near field communication (NFC).

For the future, this would mean no more credit card swipes, signatures and passwords. The potential behind this is astonishing. By now, Apple makes a substantial amount of money as a digital retailer. Strengthening its vendor lock-in, in 2013 customers spent more than $10 billion at its App Store. 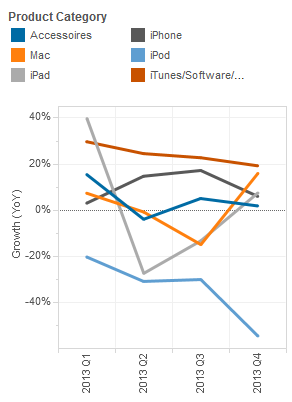 Furthermore, the growth figures indicate it to be a sustainable pillar of Apple’s business. Year-over-year comparison by quarter, no other Apple product category has grown so steadily throughout 2013 as the e-commerce. On average, it was more than 20 percent (see figure on the left).

Considering the revenue streams of Apple, the “Touch ID” is a promising step to secure its business model of providing computer hardware. No other tech company controls the value chain from hardware manufacturing onto the software, including the physical stores and the e-commerce platforms, as well as Apple.

Seems to be a good starting position for the future.