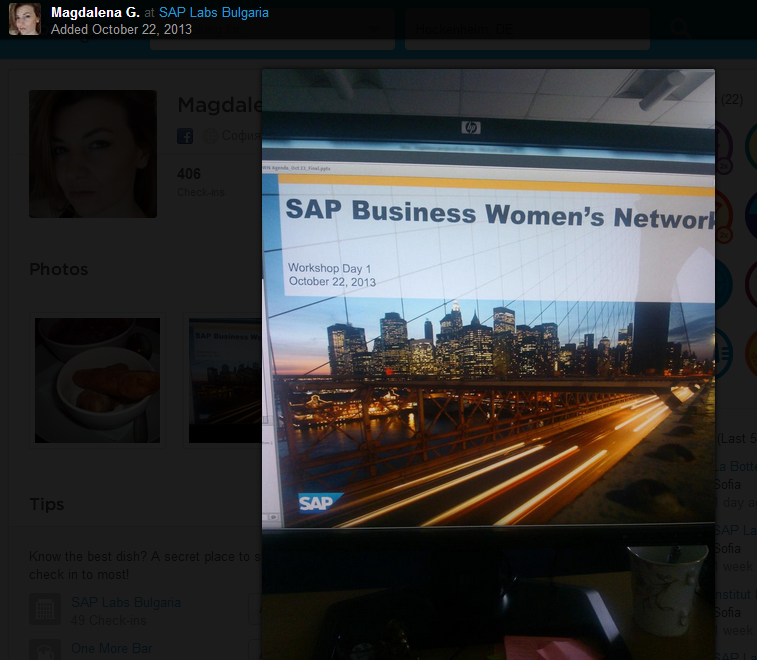 Do you remember the picture above? This is the first slide of the two day workshop organized by SAP Business Women’s Network in October 2013. It is also one of the main reasons why  three women from SAP Labs Bulgaria became organizers of TEDxMladostWomen 2013. In this blog post I want to share the history behind it.

When our local BWN chapter leader Monika sent an invitation for a two day BWN workshop to the most active women in the female community in Sofia, my first thought was “Oh, my God! We are going to meet other women who are part of other chapters all around the world. I will be on the same meeting with Nicole McCabe. This is unbelievable!” It happened so that I was the onlyone able to attend the first day of the workshop. When the meeting started I felt so proud that I am a part of it that I wanted to share my excitement with the whole world and I checked in Foursquare adding the picture above. During the break we exchanged few mails with Monika who was on business trip and was interested in how the workshop was going on. Immediately I received a message from Deni Simeonova who is the former license owner of TEDxMladosWomen in Sofia. It wrote  “I saw the picture you shared in foursquare. Do you want to lead the organization of the next TEDxMladostWomen event in Sofia this year?”.

I couldn’t believe it. I attended TEDxMladostWomen last year and I was in contact with Deni in the last few months asking her to update me when can I expect the next release but I did not expect such a proposal. When I think about it I feel like I want to burst into tears because this was the first time in my life someone has given me an unexpected possibility only because of my personal attitude to a topic and not because I have achieved something extraordinary.

I did not accept the proposal immediately  even though deep in my heart I knew I wanted it. This was probably because of my fear of failure. I started asking Deni questions. So we spent a few days and nights talking on Facebook about it. I wanted to know more before taking the hard decision. During our conversations Deni shared that she was not able to organize the event for second consecutive year because of her new job in the European Commission in Brussels but she wanted to find someone who is very much into the topic. I also  found out that one of the sponsors of the former event had refused to support her in the  very last days and she had paid the bigger part of event’s expensesherself. I think this was the fact that made me take the final decision that I am in. I admired this not very tall but extraordinary strong woman who had done her best to make TEDxWomen come true for the first time in Bulgaria. I knew that I had to build a team, find sponsors and speakers and I had only six weeks until event day. TEDxWomen is a local TED event which features TEDWomen talks and mandatory streaming of sessions from the original event in San Francisco and has to be organized not later than 24 hours after TEDWomen. Deni advised me to find women from the female community in SAP Labs Bulgaria. I remember very clear her words “propose this to everyone you know and choose people you really trust”. So I did it. I shared the proposal in the local community. I also asked my personal friends to join. As a result seven women confirmed that their wish  to be involved in the organization. There were also tree of  the former event organizers who would be part of the team which was fine because of their previous experience. We run behind time so I kicked off the preparation with no live meeting. I just created a secret group in Facebook and we started  talking on the things we had to achieve. Afterwards we started meeting each other weekly after work in a winery bar downtown only to go through the check list and   make sure  nothing was forgotten. One week after the beginning we knew who  would be the people that will do their best to make the event come true. On the first live meeting we decided that only four women will stay in the group. One of the reasons was that we had shared confidential information about the speakers and the sponsors  and we had to ensure that this would stay between women who trust each other. 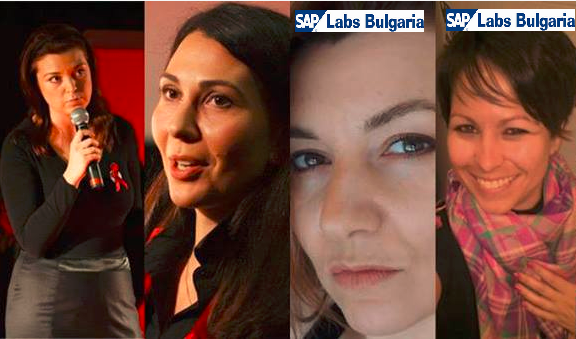 When we started to look for speakers I did not have a clue what we were looking for. Each of the organizers shared women  she admired in the facebook group and we started having phone calls with them. Then I  figured out my criteria. I wanted to invite people who were talking with their hearts in every single word they say. I did not want to invite people who would be there for personal or business interest. As a result we invited an inventor, a culinary blogger and a writer on women topics.

When I went to Rumiana Trencheva (CEO of SAP Bulgaria) asking her to sponsor  the TEDxMladostWomen event she didn’t even think about it. The answer was “You have my support”. Rumiana had been a guest in the Meet Successful Women initiative I was leading and I suppose that apart from her wish to support a TED event the trust we had built then made her take her decision very fast. My talk with Radoslav Nikolov (VP of SAP Hana Cloud Development) was two weeks before the event date and was very interesting. I asked him to sponsor the event and my part as an organizer was to ensure 10 seats  at the conference for SAP employees. Apart from that I shared my idea with him to have a contest for the 10 seats asking people in the company to do something extraordinary and show their readiness for a change in their life. I was challenged by Rado as well. He tried to test me asking “You still do not have the final list of speakers. This means that you might fail, right?”. I said “Yes, that’s right. We might fail but we will not.” I received his support.

Then came the time for the hard work. We had to finalize the list of speakers, meet with each of them and help them prepare their speeches. We also had to deal with tons of tiny and not so tiny details like arranging the venue, the catering, the video and photo coverage. We had to negotiate hard to get prices we could afford without compromising the quality of anything. We had to be inspiring to attract volunteers to help us with whatever tasks we wouldn’t be able to do ourselves. We had to coordinate getting the presents for our guests from the many sponsors we had convinced to help us. And last but not least we had to handle the hundreds of messages and applications we got from people wanting to attend the conference. As we had decided not to sell tickets people had to apply writing a motivation on why they wanted to attend TEDxMladostWomen. So we read tons of application forms which was tiring but also very motivating. Then we had to prepare a minute-by-minute scenario for the big day, learn our roles and lines and rehearse. We had to keep in mind the big picture while making sure every little detail is covered. All of this kept us very busy in the days before the event but we were so eager to do it we weren’t able to sleep anyway.

Here I want to say “Thank you” to Elena Angelova who was responsible for a big part of the activities with very little visibility, but she did her best to make them happen.

I was so busy before the event and it felt so exhausting to combine my regular job with all the tasks related to the conference that I had to take an unplanned vacation the week before it. The women in the female community @ SAP Labs Bulgaria were with me (mentally at least). As the contest idea did not work Tzvetelina Peteva and Monika helped me find the ten persons from the company whom we invited as employee representatives.

When we got all speakers together for the first time we had invited the volunteers as well. Then Lora, a girl from the office mailed me and asked me “Can I attend the meeting?”. I said “Yes, of course.” After that meeting Lora started  giving me advises on how we can better promote the event in social media. Two days later I went to her room and said “Lora, do you want to join the group of TEDxMladostWomen organizers? I need you.” She replied “Of course I want. This is what I have always dreamed about”. This is how the team was completed with the fifth very right person. I  trusted Lora from first sight. I just felt that she wants the success of the event so I only gave her the chance to exhibit her talent.

Three days before the event day we had rehearsal to check the speakers’ preparation. Then we found out that one of the speakers was not ready with his presentation. He didn’t have any concept on what wanted to talk about. I was angry because we had put a lot of efforts and there was a chance to fail because of this. In the same time I was totally exhausted. Another woman in our group took the responsibility to help the speaker to prepare. So the speaker was very successful at the end.

You can find photos from the event here. The videos are still not translated in English but you can check them here.

I will not miss to share with you photo we took with colleagues from SAP Labs Bulgaria. We had two men sharing the great experience with us🙂

After the event we decided to share our experience with the colleagues in the office. It was a small improvised wine cocktail and my personal feeling was that people were not only impressed by what we had managed to achieve in a very aggressive timeline but also celebrated together with us the excitement we still had.

When I think about TEDxMladostWomen I feel that I am grateful for the chance to have been a part of a fabulous adventure.

Eli and Lora, thank you for being on the trip together with me:-)

P.S. This blogpost has been written with support from my colleague Elena Angelova(Behind the scenes part and English language correction). Thank you, Eli!