Which came first: the barcode or the egg?

Do you remember the days before barcodes? All the goods in shops needed a pricing sticker, which meant someone would have to trundle round the stockroom or the shop floor with a pricing gun doing the tagging, then the cashier would have to manually enter the price into an adding machine at the checkout. Quaint, huh? 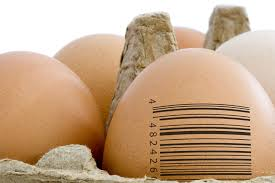 Various ideas and designs for product identification had been knocking around since the 1940s, but the technology required to read the symbols was immature. The universal product code (UPC) with which we’re familiar today didn’t become standardised until the early 1970s.

At that point, it was calculated that at least 70 percent of products would need to have the barcode printed on them by the manufacturer in order to achieve the projected savings to the grocery industry. But by 1977, fewer than 200 stores had scanners — hardly an unqualified commercial success.

Looking back, it seems inconceivable that barcode adoption would have such a faltering start. But think about it: Barcodes without scanners, or scanners without barcodes, were useless. Success required consumer goods manufacturers to adopt barcode labels en masse. A critical mass of retailers would need to simultaneously buy expensive scanners — at a time when industry naysayers were predicting the demise of the whole concept. Neither side was willing to move first, creating a classic case of chicken-and-egg.

Now think about today’s commerce networks. You have an open ecosystem that allows companies to benefit from connected global commerce; and there’s a centralised point through which invoices and purchase orders can be exchanged electronically.  Imagine if there were no sellers on board, only buyers, or vice versa — there would be no synergy and no compelling reason to participate.

Or imagine the absence of standards-based information exchange. It would be complex and inefficient to the point of chaos. The whole network would quickly collapse. That’s why it’s vital to be part of a network that has achieved critical mass, making it unthinkable not to join.

And barcodes? Well, it turned out the benefits weren’t confined to savings. While there was a modest 1 to 2 percent decrease in operating costs that allowed stores to lower prices to draw in shoppers, it was the detailed sales information acquired by the new systems that allowed grocery retailers to be more responsive to customers’ needs. The same thing happened with Business Networks: Cost savings and convenience were the initial draw, but the additional “big data” insights are what members now value most.

The UPC has become a ubiquitous symbol of modern civilisation. Even my corner shop now has fancy laser scanners, and the most artistically designed bottle of perfume gives up precious space on its pastel coloured box to those ugly parallel lines.

What’s the biggest benefit of your participation in a commerce network?  Speed, convenience, automation, cost savings — or the insight gained from market intelligence?