The mysterious disappearance of Cloud for Financials: Solved

A few days ago, I was researching a blog on HANA extensions and I saw  potential synergy between Cloud for Financials (C4F) and the continuing migration of the Business Suite to HANA.  I hadn’t seen any news concerning C4F in a while and I wanted to catch up on the product.

The last sign of any activity was on September 2013 at a SAP Finance conference in St. Leon-Rot. After that the trail went cold.

Something had changed but I no idea what had happened.

The main cloud page for SAP in English is missing any reference to the C4F offer. There are mentions of Cloud for Travel and Expense, SAP Business ByDesign, SAP Financial Services Network and SAP E-Invoicing for Compliance Cloud.

C4F is mentioned on German version of this page.

There is no Android App for C4F

There are mobile applications for Cloud4Customer and Cloud4Travel but there is no mobile app for C4F on the Play Store.

There is no recent “What’s New” Video or documentation

C4F is usually associated with Cloud for Travel and Expense (C4TE) and Business ByDesign (ByD).

There is no help documentation for C4F

If you look at the help selections for SAP cloud offers, C4F is missing.

The C4F section on SCN is dead

There is a section on SCN specifically for C4J but it basically inactive with just a few off-topic forum posts.

The answer surprised me a bit. 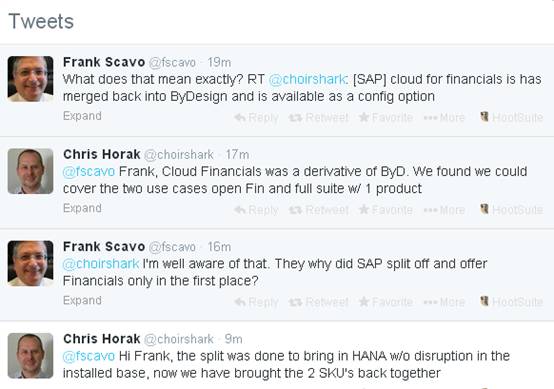 In an upcoming blog, I’ll be taking a look at the impact of this move

Hi, Richard, I guess you are getting the first Sherlock Holmes award for 2014 :=)

FYI, I have been on an extended leave of absence for 3 months and am just now catching up. Feel free to send me a mail with questions you have at c.horak@sap.com, or tag me in your upcoming blog post and I will try to provide you with information.

I'll ping you when I publish the second blog.

I've been mining some of the your old blogs and their comment threads. Great stuff that provides excellent insights into the current change.

... and also would be interested in your view about Financials and what scope from logistics, etc you might want to add. We all know that at the end the suite always wins ;-.)

I'm sorry, but I had a good laugh on this one. The great detective that you are (no sarcasm) not being able to solve this self-defined mystery 🙂 . Why don't detectives ever take the direct route, like the rest of us, as demonstrated by Tammy?

Still, nice of you to write it down.

And more seriously a reminder to SAP to not only market make noise about the new stuff, but to also keep us (the ecosystem) in the loop about this kind of change. Because it has happened before...

>Why don't detectives ever take the direct route, like the rest of us, as demonstrated by Tammy?

Actually, I tried this via a few tweets but didn't get a response 😉

And more seriously a reminder to SAP to not only market make noise about the new stuff, but to also keep us (the ecosystem) in the loop about this kind of change. Because it has happened before..

Excellent point - the buzz is often heaviest on product releases but sort of dies regarding other stages in a product's lifecycle.

I hear you, but nothing dies. Why do we need always to externalize when we do our homework? And here i mean converging to one platform?

Good catch with the homepage though 😉

Stay tuned for more interesting news on this chapter in April...

Well, maybe because prior announcements have raised some expectations externally? You might want to manage those. I still find it odd that for say move A you make a lot of publicity, and then for move B you don't, because it happens to undo move A.

Point taken. Will recover this in April.

Today, Business ByDesign is undergoing a new effort by "re-factoring" the application to run on the SAP HANA Cloud Platform which will enable businesses of all sizes and across all industries and lines of business to run their entire business in the cloud more efficiently and effectively. So along with the SAP Business Suite on HANA, SAP Business ByDesign will benefit from this breakthrough techology.

I hope this was helpful and I look forward to your comments.

Thanks for your prompt response.

Was the motivation behind the "re-merge" based primarily on technical reasons (dealing with two codes bases, etc) or were there other factors (broader cloud strategy, etc) that influenced the decision?

From what I understand, the decision was both technical (one product, one code line) and product strategy focused to ensure alignment of development teams and roadmaps for the entire ByD suite rather than have two separate products with separate strategies.

I thought we discussed this before, major driver is to simplify all of our cloud solutions on one platform. This not only creates synergies - but even more innovation for all cloud saas apps. You can see that in the portfolio with release 1402 already.

Hi Jim, so if I understand the sequence of events, it would seem that splitting off Cloud Financials from ByD in the first place turned out to have been a mistake. Am I right?

That's a really interesting question. Is that an IED buried in there? 😉

It help to speed up the process. But if you converge to one platform, you bether have your "code" together to simplify.

Jim thanks for this, and Dick well done on the blog post as usual.

Jim and Sven - question for you: last I checked, for the large enterprise SAP was sharing a vision of Line of Business Cloud solutions: my customers (Cloud for Customer), my people (SuccessFactors HCM), my suppliers (Ariba), and my money (Cloud for Financials).

Also, I have seen at least one add-on for Cloud for Financials that was not part of ByDesign. Will such enhancements now be included in ByDesign and offered to customers of ByDesign as well?

Thanks for the question and you raise a lot of good points. Unfortunately, I need to withhold my answers because SAP is planning a some important announcements around our cloud strategy sometime in April in the run up to SapphireNOW. I'm confident your questions and more will be answered then.

Jim - thanks for the prompt response and - fair enough. Will look forward to the formal update, I know many others are also. I like many aspects of SAP's cloud portfolio but have a hard time explaining the overall strategy and direction. Maybe after April I won't 🙂

As promised, I wrote a follow-up blog on this topic.