Synergy, as defined in literature, is working together to achieve greater output than the sum of individual outputs. Synergy s well understood in chemistry where the combination of two chemicals creates a completely different chemical with highly different characteristics. A famous example is water, where two atoms of hydrogen and one atom of oxygen produce water.

Taj Mahal is a great example of human synergy in which thousands of artisans worked together to create one of the world’s wonders. It is one of greatest symbols of synergy of various people who applied individual strengths and created a great architectural marvel!

Synergy can be well explained as: “Aligning to create a solution with extra dimensions”

The main factor in synergy is alignment of strengths of individuals in such a way that it creates a solution which is one dimension above the individual strength dimensions. For example, the four lines shown below in figure 1 can be joined in various ways to form various shapes as shown in figure 2. 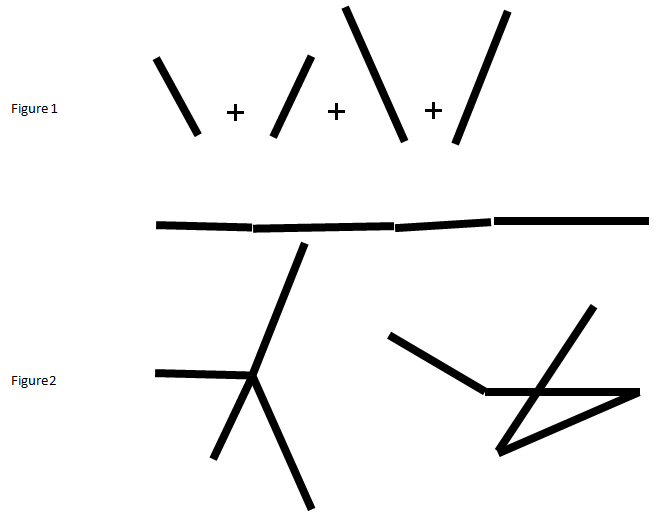 Figure 2 shows various styles of joining the lines where total length of each line remains the same but we do not get a really useful solution! The alignment of lines is perfect in Figure 3 to create a rectangle.  The interesting thing about rectangle is that no lines are prominent; rather, it is the area defined by the lines dominates the solution. In this case, the solution is far better than the individual lines and also the emphasis shifts from individual lines to the rectangle.

Similarly, rectangles of different sizes can be synergized to form a box in which the capacity of box is more relevant than individual rectangle.

In both the examples we clearly see the changes in dimensions, as in line case, length (1D) changes from one dimension to (2D) two dimension, i.e. the rectangle and in rectangle case, 2D changes to three dimension (3D) i.e. volume.

Mathematically, we can define synergy to be a transformation function which transforms the strengths of individual objects to produce greater output.

How Synergy works in companies?

The above example clearly demonstrates the power of synergy and providing extra dimensions. When the same schemes of things are applied on teams we can expect wonderful innovative products from company.

Synergy would be possible only when we work in an environment of openness and innovation. This provides individuals to contribute as per one’s strength and align with others for the greater good for company’s product rather than individual strength demonstration.

Merger and acquisitions are also vivid examples of applying synergies across companies; only here, revenue generation synergy is applied and companies make sure that the revenue they generate after merger would be greater than the individual companies’ total revenues. This would be complementary technology thus boosting sales of both organizations by pitching in better products for both companies. Similar is the operation / cost strategy of merging organizations in which the operations can be streamlined much better by removing the redundancy. SAP Corporate has successfully applied both revenue and cost synergies in companies such as SuccessFactors and Ariba .Similarly, Sybase helped SAP with top line by complementing revenue. For operations, SAP implemented SuccessFactors internally to streamline HR processes. Combining the whole development department of SAP, Ariba and SuccessFactors under single board of SAP helped in organization with lean management and efficient decision making.

To leverage the strength of individuals in geographically distant locations, these days many companies including SAP have created a crowdsourcing platform such as SAP BLUE to build innovative ideas. This enables the employee to apply his his/her strength to create next generation killer app/products for all industries across technology. This would be a great way to synergize strengths of individuals for better and newer innovations. It makes more sense for big companies such as SAP which has acquired companies with different skills and  industry background, the importance of synergy platform to facilitate not only the future products/innovation but also a way establish integration of company culture, platform to collaborate and a platform to establish employee connect.

In the current scenario, with the current speed of innovation where products have life spans of 3months to 1 year and sometimes, probably less than that, as we have seen the in the evolution of TV (Television) with gestured enabled smart TV being launched with voice enabled command very quickly it becomes all the more important to invest in the people initiative to drive synergy across company or across companies. The synergy platforms are great assets to multinational organizations as they act as enabler of innovation for a better future of these organizations.

Good one!  and  vivid analogies... the  organsations implementing  this  effectively  shall be  the forerunners..