SuccessFactors: all you need to know about Authorizations and Security

Data, security, and privacy are obviously quite important areas for customers in HCM and so I believe it is essential that customers understand how SuccessFactors protects their data through authorizations and security within the system. In this blog I will discuss the Role-Based Permission (RBP) framework in SuccessFactors that controls data access for different users. To understand how customer data is physically protected in the data center and during transfer to the web browser please refer to the Security in SuccessFactors section in the SAP and SuccessFactors – An Overview article published by SAPexperts and this blog by SuccessFactors’ Vinod Choudhary on How We Address Data Security in Europe and Canada.

About the RBP framework

The RBP framework allows for granular management of field-level permissions across most of the SuccessFactors HCM suite. It uses Permission Roles to be created that are assigned to Permission Groups (groups of users) for target populations (more on this later). This is not wholly different from the authorization concept in SAP. However, the RBP framework also includes structural-based permissions as standard (e.g. assignment of authorizations for a manager and 3 levels below). The RBP framework allows for granular rights at field-level, meaning that permissions (e.g. view, edit, correct, delete, etc.) can be controlled for each field in each role. Access to transactions and administrative functionality is also controlled to a fairly granular level. As an example, almost all fields, menu items, and actions in the Employee Files in Employee Central can be permissioned.

There are a few minor caveats with RBPs that should be considered:

Concepts of the RBP framework.

The concepts of the RBP framework evolve around having Granted Users (who should have the permissions assigned) that have a Permission Role assigned (the permissions) for a Target population (those individuals that the permissions are applied upon). To summarize:

This concept can be demonstrated in the diagram below: 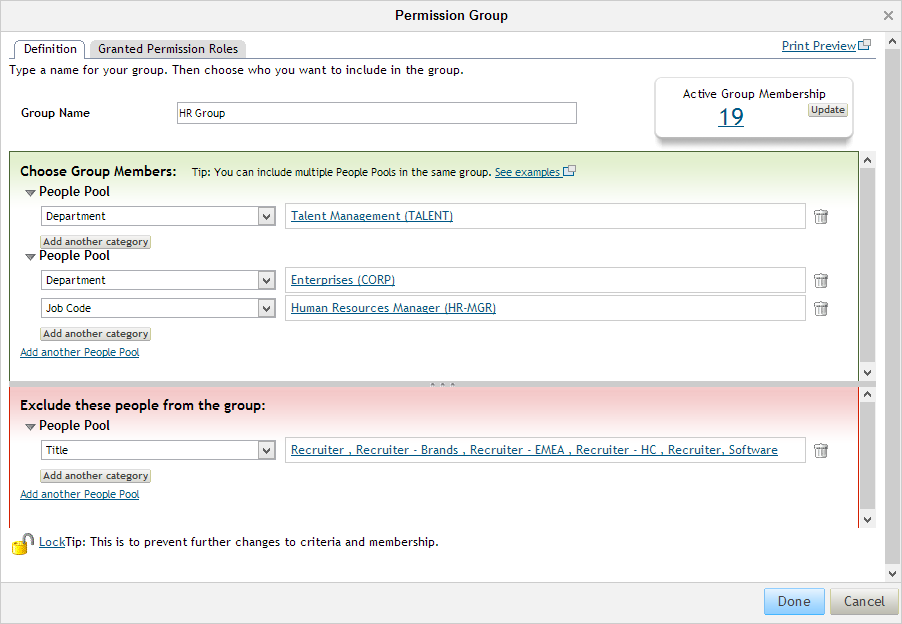 Now let’s look through the coreconcepts of the RBP framework.

Granted Users are those users that are assigned a Permission Role for a specific Target population. Granted Users can be one of the following options:

If the Granted Users are a type of Manager (e.g. Manager or Matrix Manager) then the Target populations can be:

Additionally for Managers the level of indirect reports can be selected for 1, 2, 3, or all levels below and the manager themselves can also be included in this population. 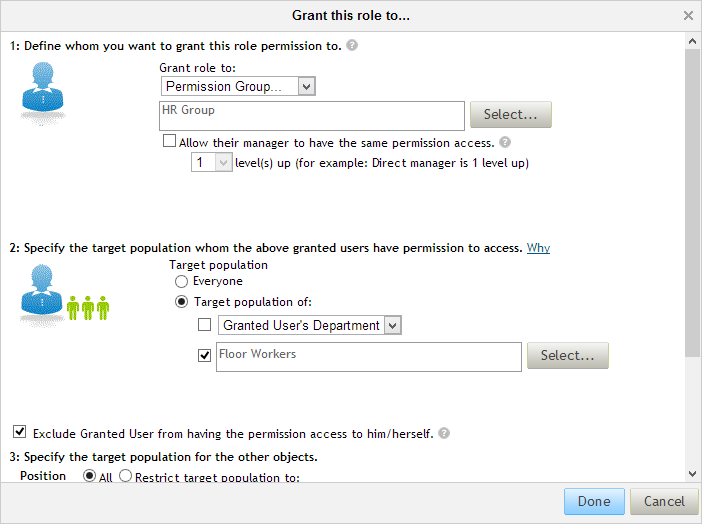 In the screenshot below the Employee Data permissions for non-Effective-dated employee data fields in Employee Central can be selected, either as View or Edit. Note that selecting an Edit permission automatically selects the View permission. 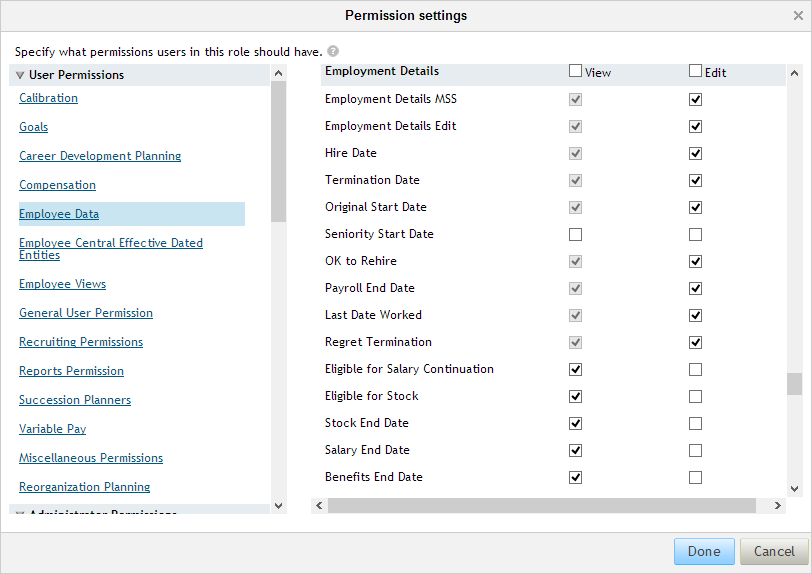 Effective-dated fields in Employee Central have additional permissions that can allow users to not only view and edit current data, but also to view the history and correct and delete records as necessary. Of course, different permissions can be given to different Roles so that, say, only HR Power Users can correct or delete Effective-dated employee data records. The screenshot below demonstrates these permissions. 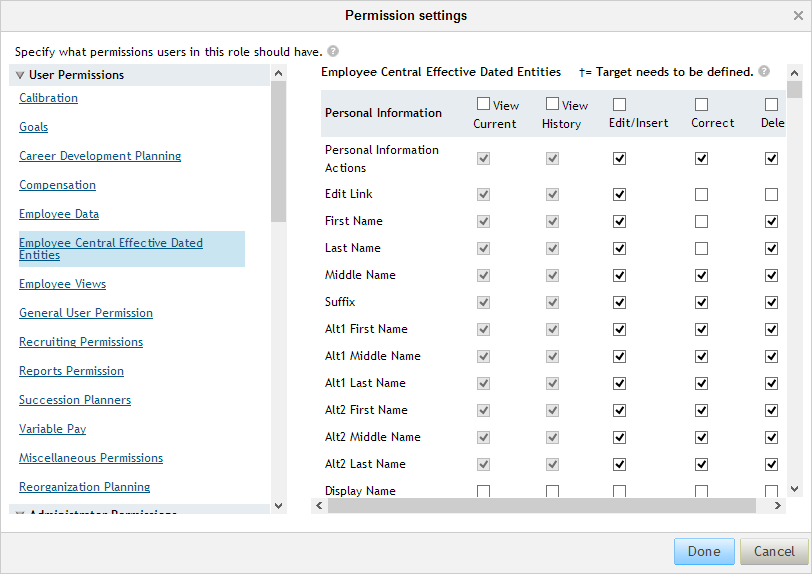 Most other permissions are enabled or disabled via checkbox, as seen below for the Succession Planning permissions. The † sign indicates that the specific permission requires a Target population to be defined. Additionally, hovering the mouse cursor over the question mark icon next to a permission will display the help text for that permission. Similarly, administrator permissions can be selected in a similar way: 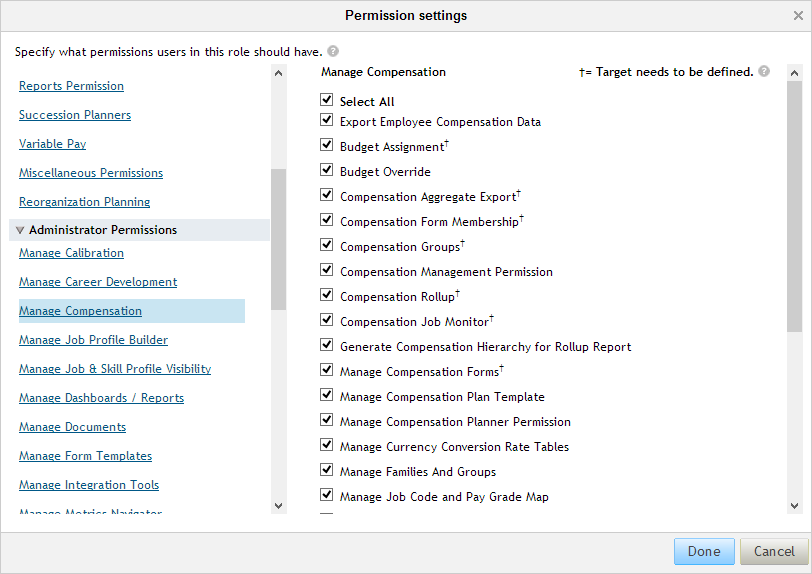 Now that we’ve looked at the concepts of the RBP framework, let’s look at a couple of examples to demonstrate how these can be applied.

Below are two examples of RBP scenarios. We will cover the process and assignment of Permission Roles, but we will not cover creating the Permission Roles themselves. The previous section should give some idea of how these can be created.

In this example we want all users in the USA with Job Code HR Professional to be able to create, edit, and delete any data in Employee Files for all employees located in the USA. Our requirement is:

This is demonstrated in the diagram below:

We will use the following steps:

This final step is demonstrated in the screenshot below: 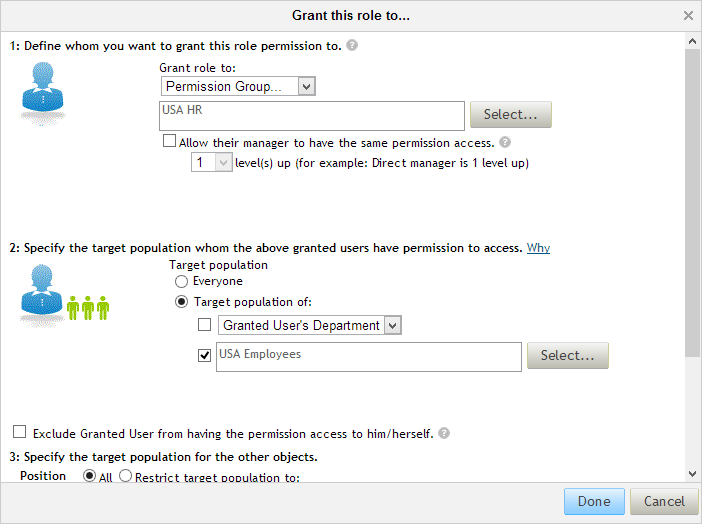 Now let’s look at another example, this time with managers.

In this example we want all users in the USA with Job Code HR Professional to be able to create, edit, and delete any data in Employee Files for all employees located in the USA.

In this example we want all managers in the USA to be able to launch the Change Job and Compensation Info action in Employee Files for all employees they manage directly and indirectly. Our requirement is:

This is demonstrated in the diagram below:

Note that since we have already created a Permission Group for employees in the USA we don’t need to create any further Permission Groups in this example. We will use the following steps:

This final step is demonstrated in the screenshot below: Hopefully these two examples can demonstrate the way in which Permission Roles are assigned to users.

Granularity of permissions and Role Design

The RBP framework provides a great deal of granularity in assigning permissions and this can be a daunting task to design, create, and/or maintain. That is why it is very important to ensure that Permission Roles and the overall permission design is well thought out and catered for by a minimal number of Permission Roles.

To give an idea of the granularity of permissions, for Employee Central there are over 400 permissions that can be used in the various Permission Roles that would be required for end users and administrators. However, in comparison Succession & Development has only around 20 permissions and Employee Profile around 50 permissions – and permissions for both are largely view/hide options.

Each user’s permissions can be viewed in the system using the View User Permission transaction – if the required permission is assigned of course. This provides an overview of all permissions assigned to a user and from which Permission Role they have been granted through. This is a helpful tool for administrators when troubleshooting RBP issues for permissions and the right level of access. 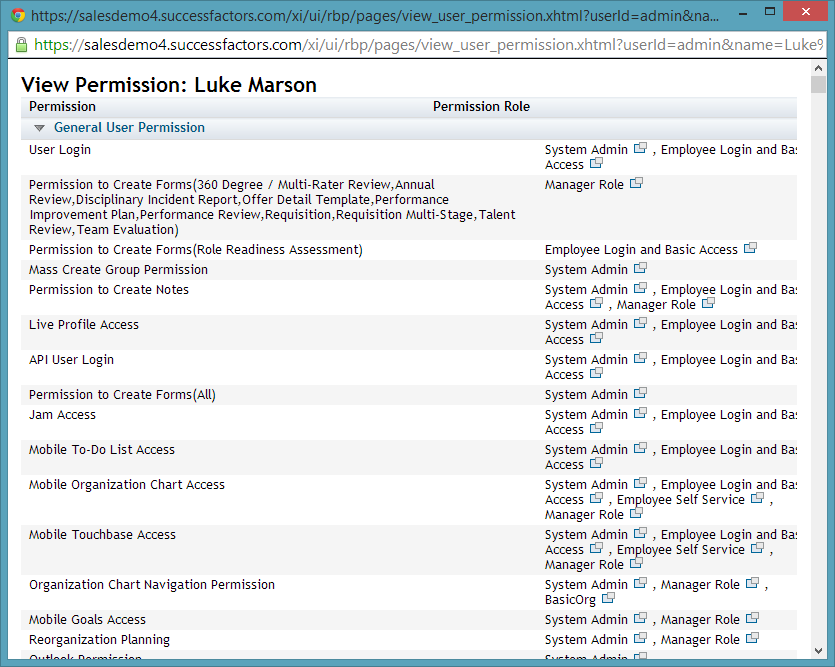 In addition, there are four Ad-Hoc Reports provided for more detailed reporting on RBPs:

Copying RBPs from one customer instance to another

RBP configuration can be copied from the Test instance to the Production instance. There are both Provisioning tools and a tool in OneAdmin. This requires activation prior to being permissioned to a user.

The RBP framework differs from authorizations in SAP, but the design has similarities and for system administrators permissions should be much easier to maintain in-house than SAP authorizations are. The RBP framework is powerful, but also requires carefully planned design of Permission Roles. Handling assignment is fairly straightforward and can be managed and tracked easily. For Global organizations, the RBP framework makes the solution scalable and accessible with the required level of granularity. Overall this type of framework is good for customers and has enough flexibility to cater for most needs.