Adobe Forms provides many good features which are not possible with other kind of forms.
So, Adobe Forms stands as very efficient alternative for the Smartforms for the next generation document services.

Adobe Life Cycle Designer is required for building form in the Adobe Forms. Adobe Forms is accessed by the T-Code SFP.

T-Code SFP will navigate us to entry point for the Form Builder.

Every form requires an interface to be created first as because interface is the one through which we can get the required data based on the user inputs.

To create an interface, check the Interface radio button, enter the interface name and click on create button. 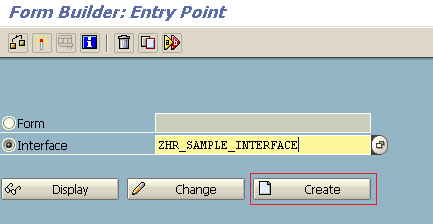 Enter the description for form interface, select interface type and click on the save button.

On creation of the interface the following default initial interface screen appears which is divided into different sections.

Currency/Quantity Fields consists of the parameter which is used to set the data type for the fields.

Create a new import parameter for the user to enter Personnel Number in the selection screen.

Create a types parameter for the employee data.

In the Code Initialization, provide the import parameter as im_pernr and write the code to retrieve last name, first name based on the pernr entered. 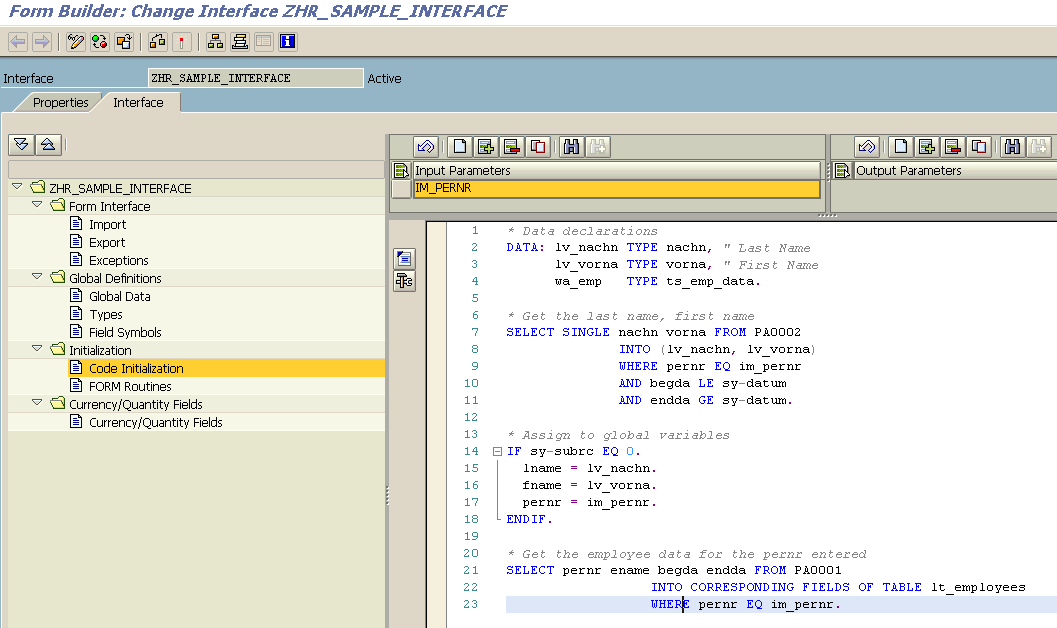 Inorder to debug the interface the keyword BREAK-POINT can be used as there is no option of break-point directly.

Every Interface is required with a form to display the data output in desired layout.

To create a form, check the Form radio button, enter the interface name and click on create button.

Enter the description for form, select associated interface and click on the save button.

On creation of the form following default initial form screen appears which is divided into different sections with the parameters created in the interface.

Drag and drop the required parameters from the left hand side to the context in the right hand side. So that they will be available in the layout section.

Where Conditions & Conditions can be written to filter the data based on a parameter. 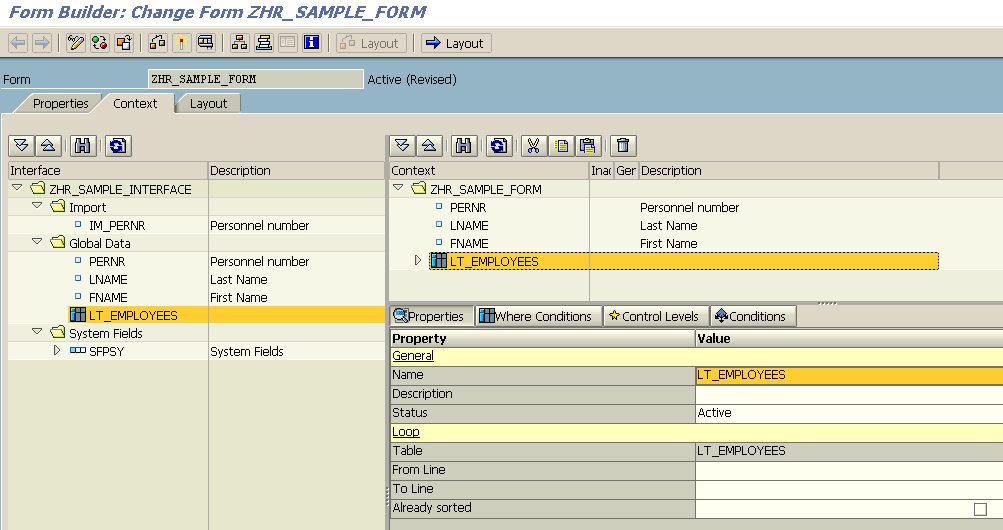 Click on the layout tab to navigate to the form layout section. Layout button can also be used for the full screen layout.

The workspace consists of the various palettes and the layout section.

The Layout section is further divided into three sections

Master Pages are used when content is required to be repeated in every page.

Preview PDF is used to see the preview of the layout designed.

Following are some of the palettes available in the layout.

In Master Pages section a content area is required, which can be designed in the Design Form section.

From standard tab of Object Library, Drag and drop a Text which is used as an heading in every page.

In the Font Palette necessary properties can be set to get the below output.

Drag and drop a Sub Form from the object library into the design view.

A subform can be moved from one place to other place by selecting the green rectangle at the top right of the subform as shown in the figure 16.

In the Data View Palette, drag and drop the required properties into the sub form.

In Hierarchy Palette, select the pernr field which will hilight the field in the layout section which allows to edit the properties. 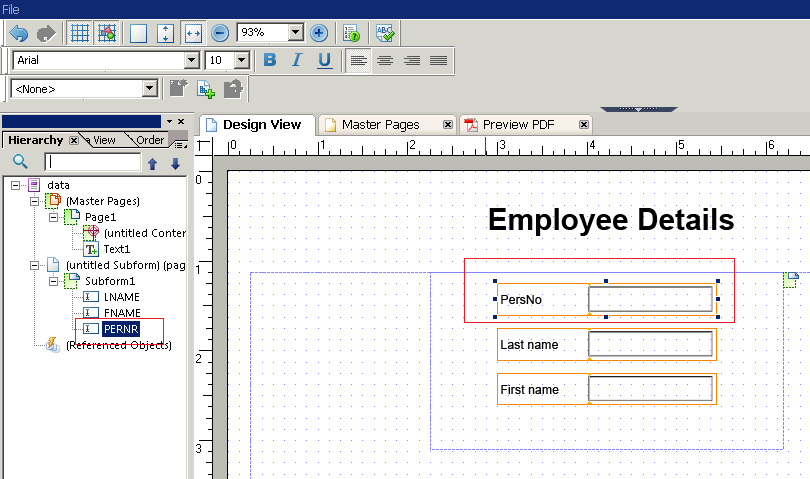 In Object Palette, Caption, Appearance, Value Type and Data Binding can be changed as shown in the figure 18. In Layout Palette, Margins and Anchor Position (Position of the subform in the form) can be changed as shown in the figure 19. In Border Palette, Borders and Background color can be changed as shown in the figure 20. 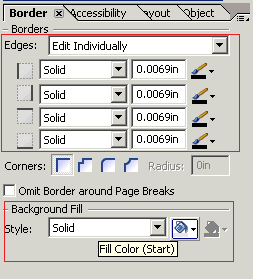 We are now done with the basic layout design and now activate the interface by activate button.

Execute the form which navigates to the selection screen as shown in the figure 21.

After executing the above screen, select the output device as LP01 and select the Print Preview button to get the PDF preview as shown in figure 22.

With this creation of basic adobe form is completed.

Now we will create the table display in the form.

Create another subform in the layout and drag and drop the table LT_EMPLOYEES from the data view into the subform. 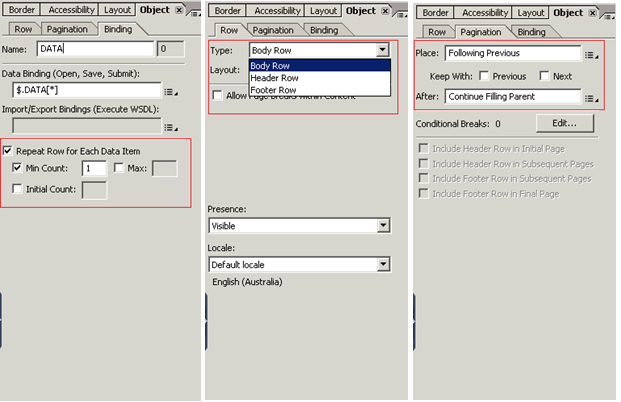 In the Binding sub tab besides setting the binding user can also mention the minimum, maximum and initial count of the rows in the table.

In the Row sub tab user can specify the type of row, whether a body row, header row or a footer row.

In the Pagination sub tab user can if the table need to move down when the above object is overflowed.

Patterns are used to format the data displayed on the form.

Select the pernr field from the hierarchy and click on the patterns under the object palette.

In the Pattern text box enter the pattern to format the pernr display as shown in the figure 25. 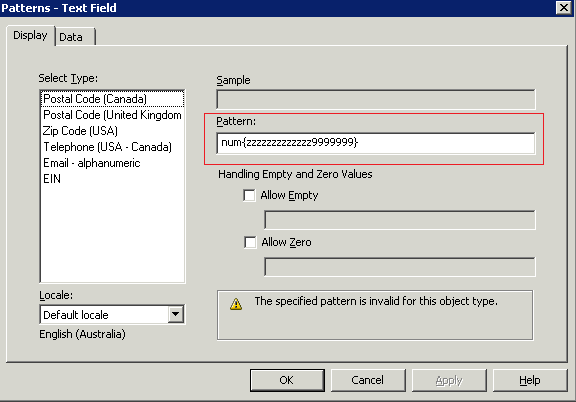 Scripts are used in the adobe forms to hide the subforms, to calculate the subtotals and totals of the table.

Select the pernr field in the hierarchy and write a script to hide the table when pernr is provided as null as shown in the figure 26.

Scripts can be also used to do the form validations.

Finally the output of the developed adobe form looks as shown in the figure 27. 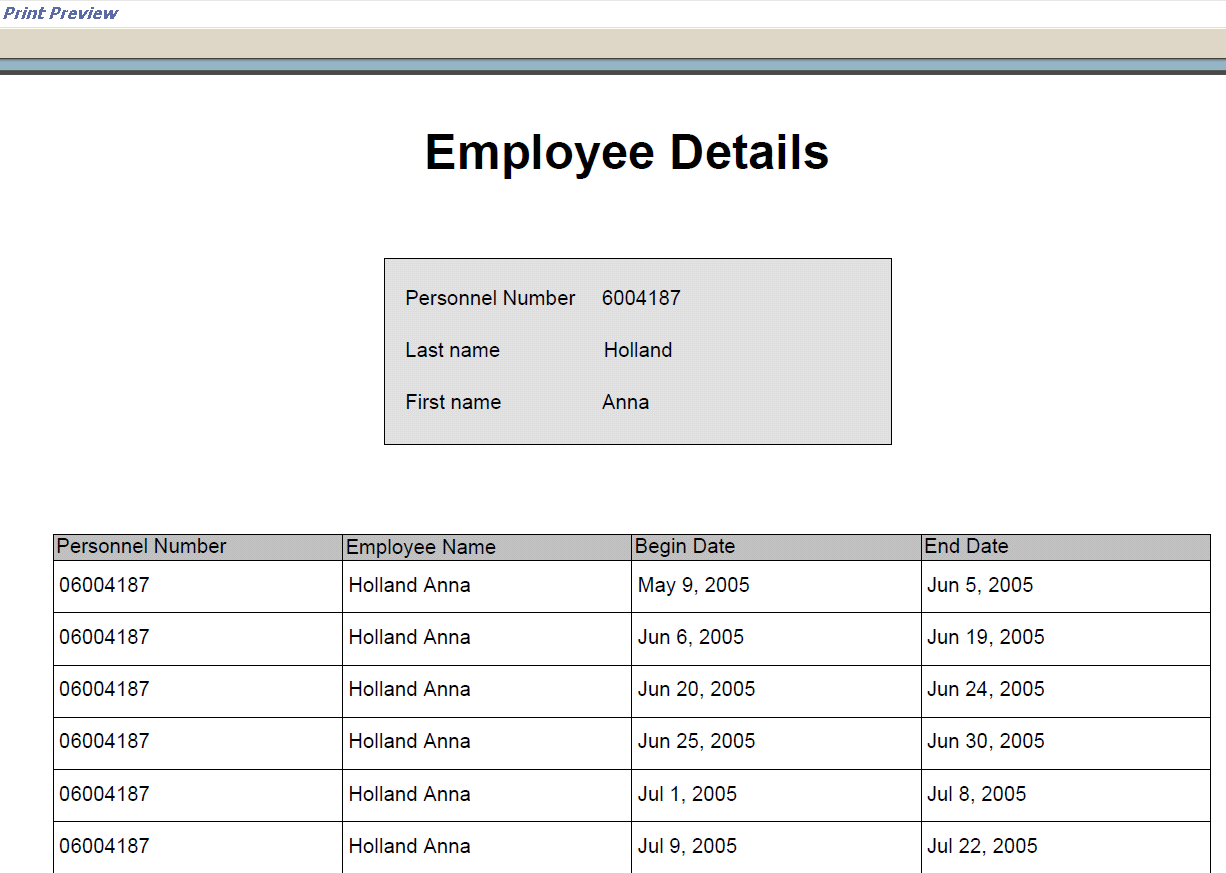