With the Oscar awards in early March, it’s a good time to look at trends for winners of the Best Picture award.  By combining the storytelling features of SAP Lumira, data from boxofficemojo.com and a visualization extension, we can look how release dates affect Best Picture winners, and also how much box office revenue Best Picture winners take in compared to other movies that year.

Sample code, source data and saved Lumira files are all included at the bottom of this posting.  Thanks to Xing Jin at SAP for helping update the sample to the latest version of Lumira, and to Sebastian and Kelly from the IBM Lab for SAP Solutions for developing the code and visualizations.

Let’s first take a look at the trend for release dates of Best Picture winners. Traditionally, award winning movies have been released in December. However, when we look at the grouped chart it is noticeable that in more recent years, this trend is not as strong. Recently, best picture winning movies have been more evenly distributed across the months from May to December. 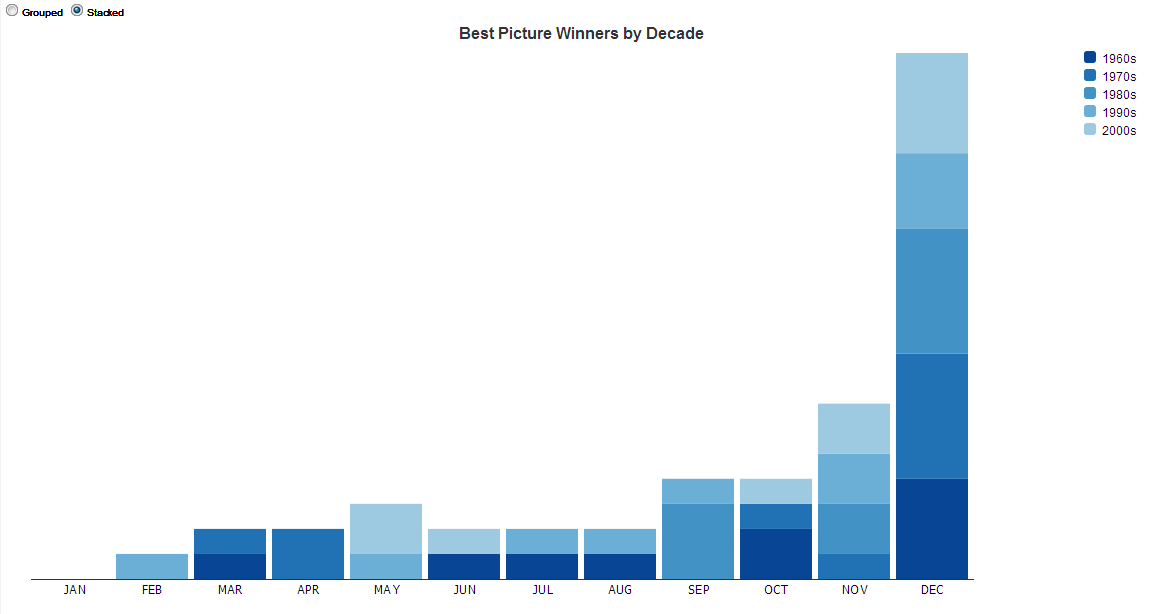 December is still the most common release month, but in more recent decades the trend is not as strong. 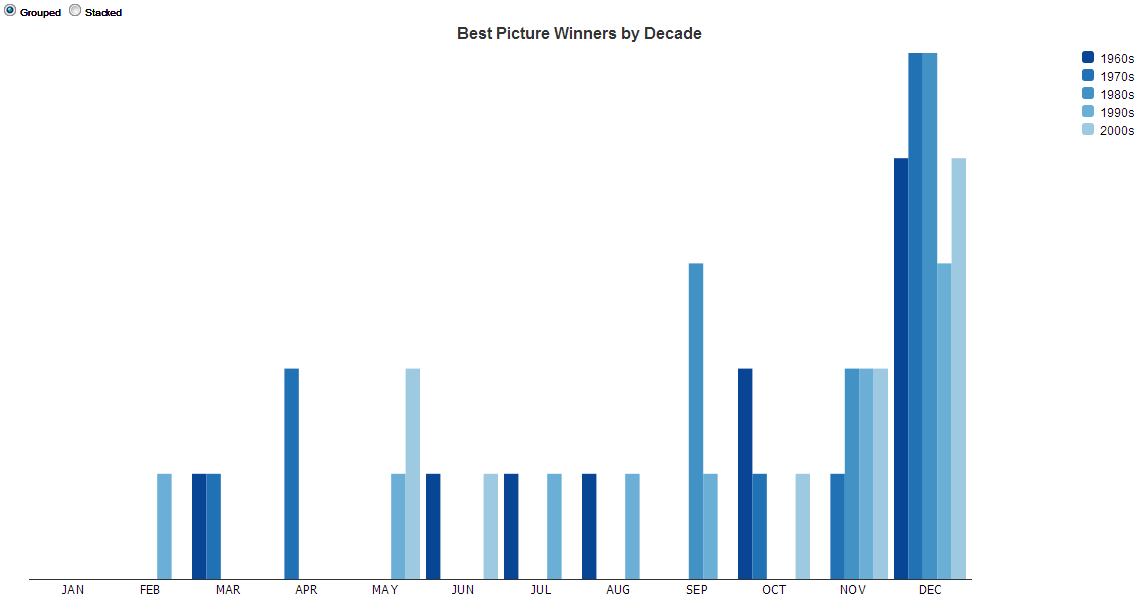 This visualization extension allows us to toggle back and forth between the grouped and stacked view using the radio button in the top left of the visualization.

The second trend we’ll look at is to compare the gross revenue for Best Picture Winners compared to the average movie gross during the same year of the premiere.  When looking at movies from 1982 and later using a Tree Map created in SAP Lumira, we can see at a glance that the only movies bringing in significantly more revenue than the average are Titanic, Forrest Gump and The Lord of the Rings: The Return of the King.

Of those three movies, Titanic is by far the biggest box office winner compared to other Best Picture Winners.  Looking at the rest of the data, we can safely say that winning the Best Picture award doesn’t mean the movie will also win at the box office. 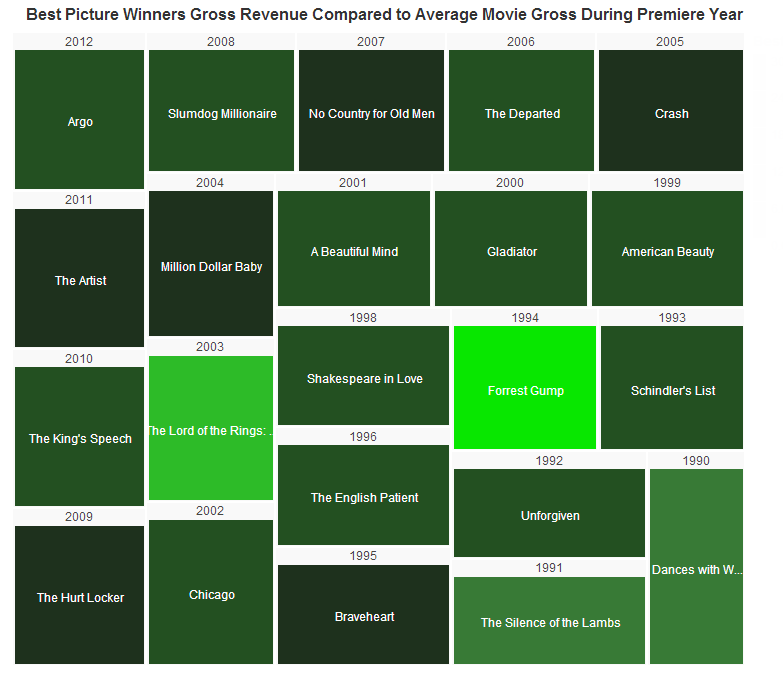 Presented as a Story

Using the SAP Lumira “Compose” view, we can place both of these visualizations on the same page, add an attractive background image, a title and some text.  The visualization extension in the top left allows some additional basic interactivity within the compose window. 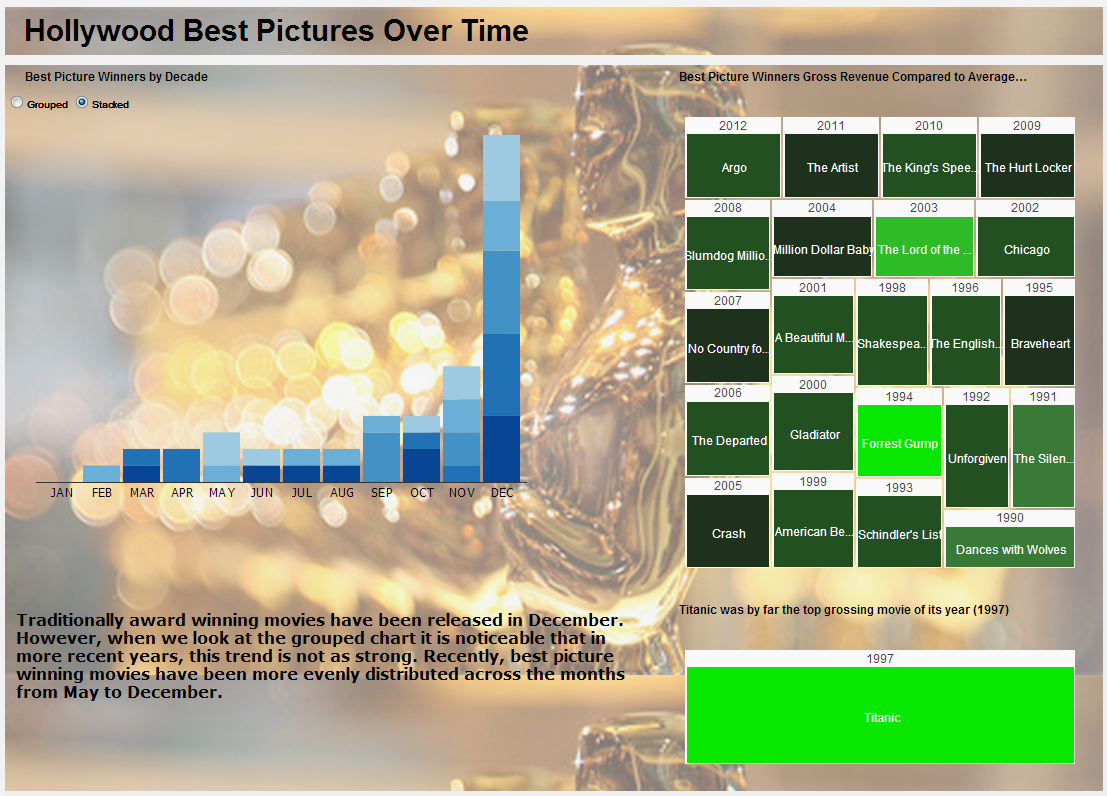 2. Copy the “Let’s Make Movies.lum” file into the “My Documents\SAP Lumira Documents” folder

3. Unzip stackgroup.zip into C:\Program Files\SAP Lumira\Desktop\extensions, so your folder looks similar to the picture below:

I just downloaded the .zip file!
There are some AMAZING visualization included ...
I'm not going to ruin the fun, but trust me, you should check it out!!

I'm not typically the biggest fan of Tag Clouds, but the 5th image is pretty cool.

it seems that Genres are slowly evening out, would love to see if the trend continued to present day. Where's the data originally from?

I think you should put the last section in RED though -- Those are perfect instructions. (some may overlook it)

Thanks for the positive feedback, Bijan.  The data source is from boxofficemojo.com

Very Cool Terry but let me ask, does this previous insight help provide you with the actionable data you'd need to hypothesize this year's big winner? I'd love to hear that part of the story 🙂