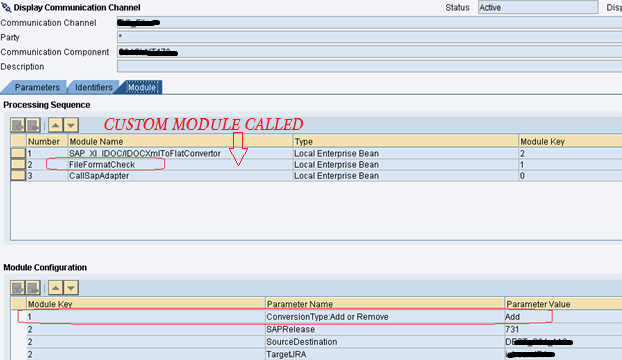 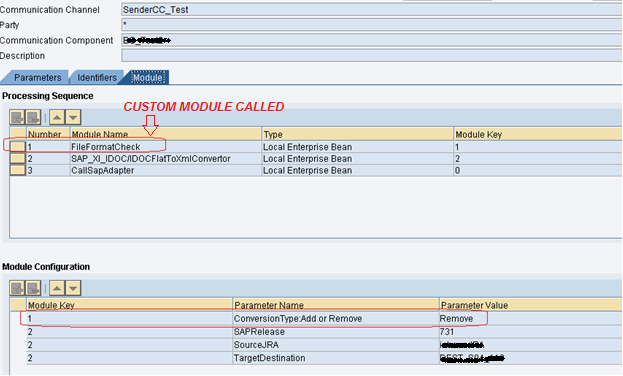 When the parameter value for ConversionType: Add or Remove is Add, as provided in the Outbound scenario, the IDoc flat file obtained from standard module IDOCXmlToFlatConvertor is embedded into the XML tag as shown below:

When the value of this parameter is provided as Remove as in the Inbound scenario, the IDoc flat file within the XML tag is extracted from the XML tag & is sent to next module in the module chain i.e IDOCFlatToXmlConvertor module, which then converts this flat file into an IDoc XML. Thus an Idoc was created using this Idoc XML as shown below. The Idoc is in status 51 due to data issue. 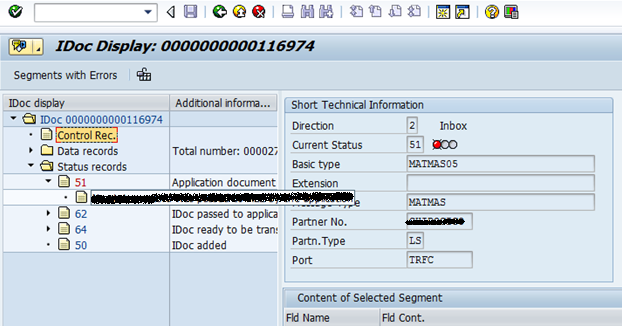 An issue was faced by us when the sequence of entries in audit log was different from the sequence maintained in the module code for these entries. The XML which was constructed for the outbound scenario would contain the Idoc control record fields extracted from Idoc flat file, a single field containing the Idoc flat file and some other fields, whose values would be provided as parameters in the communication channel(Using Module Text). For each of the steps such as starting & completion of extraction of Idoc control record, reading parameters, extracting Idoc flat file from module chain etc., an entry had to be added in the audit log. A randomly occurring issue was discovered in the audit log entries such that the entries of completion of a step would appear before the starting of a particular step. On further investigation, it came to our notice that when the timestamp of two or more entries in audit log is the same, the entries are sorted alphabetically because of which the entry of completion of a step would occur before its starting.

As shown above, when the timestamp of audit log entries is the same i.e 23.02.2014 15:07:53.004, the audit log entries of completion of a step came before starting & the entry showing that the custom module has been called came in the end. Ideally these steps should be in sequence of the steps i.e Calling the custom Module followed by starting & completion of each of the sub-steps & then successful execution of the custom module.The sequence of entries maintained in module code was as per the steps of processing as shown in the code snippet below:

Resolution: The resolution was to provide the entries which were in alphabetical order such as:

The code used for writing the module can be found in the attachments section.

Thanks you for the blog

I can not found the source code. Can you check please?

Thanks you for the blog.

Could you  put the code source in your blog.