Python is a free, open-source scripting environment that is great for prototyping and rapid application development.

Philip first shows how to install Python. Philip instructs to download the proper version from Python.org and follow the prompted steps to install. Entering “python –V” into a command prompt window on a windows machine enables python.

To simplify Python and make succinct calls when doing HTTP requests, Philip installs a package from pip-installer.org. Once downloaded, Philip enters “python get-pip.py” in the command window followed by entering “C:\Python33\Scripts>pip install requests” to complete the installation of the pip requests.

Philip shows how to make HTTP calls for a SAP River application using python’s JSON language.  Philip gives an example of how to give authorization rights, make a get request, and how to get an object back.

After the code is fully prepared, Philip shows how to get and interpret the results by running Python.

Philip’s video shows how to use Python to access SAP River applications. 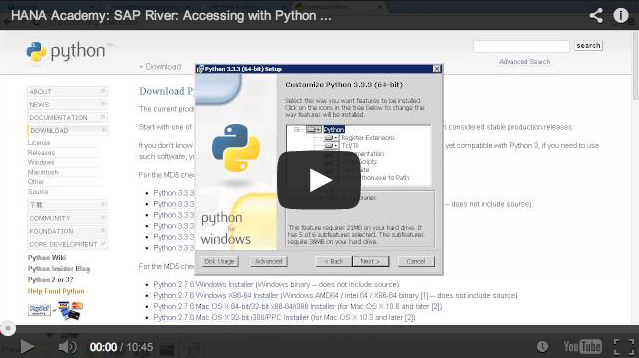 View other tutorials on SAP River at the SAP HANA Academy.