Dear Colleagues, just like to share this piece of information about SAP TM in the recent Gartner Rating for TMS in 2013.

The long-awaited 2013 Gartner Magic Quadrant for Transportation Management Systems (TMS) has now been published.  SAP has been ranked as a “Visionary” substantially improving our position this year, especially compared to many of our competitors in this Magic Quadrant. If the SAP brand value is included as decision criteria and considering additional SAP TM 9.1 capabilities, we can argue in discussions with customers that this brings us into the leaders’ quadrant.
Our continued positive movement towards the Leaders Quadrant in the future will depend upon our ability to continue demonstrating momentum by recruiting references that are using SAP TM across a broader scope and are also willing to speak to Gartner (confidentially) about it. This MQ does not consider SAP TM 9.1, currently in Ramp Up.
Since Q4 2011 over 170 companies have become TM customers from all regions and industries.
Magic Quadrant for TMS 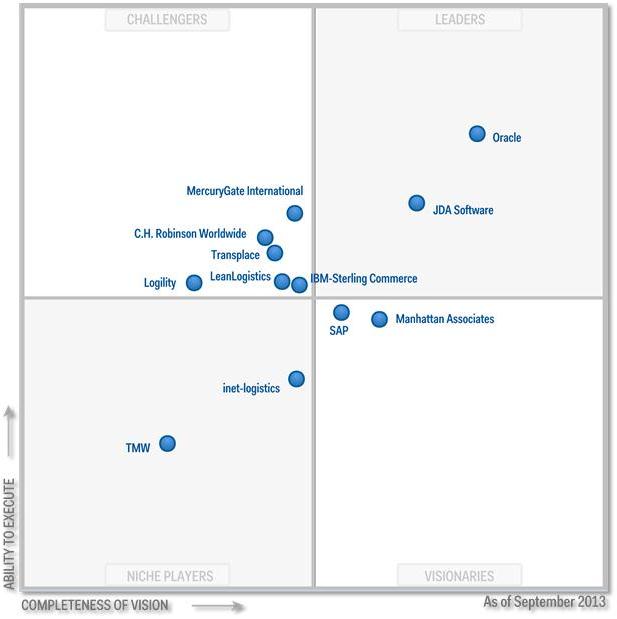 SAP Transportation Management (SAP TM) has been a work in progress for many years as SAP continues to build on its previous experience in transportation as part of its ERP and logistics execution system (LES) offerings, as well as its initial transportation planning application Transportation Planning/Vehicle Schedule (TP/VS). TM was built as a stand-alone product that exploits NetWeaver development tools and is seamlessly interfaced with SAP’s ERP and related SCM offerings. While product maturity and the number of live customers continue to lag TMS leaders, SAP continues to invest in TM to serve its shipper and LSP clients. This research was based on SAP TM 8.0 and 9.0. While TM 9.1, which includes new capabilities such as for sourcing and rail planning and execution, was released during the latter stages of creating this research, at this time it is in ramp-up. Thus, it was not considered in this evaluation.
STRENGTHS

(1) SAP can rely on the size of its ERP installed base of large, sophisticated manufacturing and distribution enterprises; its global presence and coverage for global sales and support; and its financial viability.

·
(2) Global TMS capabilities, particularly the execution side of multi-leg international shipments, are differentiated.
(3) SAP has a robust ability to deploy its TMS internationally. It is able to sell and implement SAP TM in areas where most TMS vendors lack capabilities, such as Latin America, the Middle East, Africa and the Asia/Pacific region.
(4) TM was built exploiting NetWeaver development tools such as the rule engine, which provides unique and powerful capabilities to adapt the TMS application.
(5) SAP TM was designed to support all modes (ocean, air, land and rail) for both shippers and LSPs. TM also includes capabilities specific to the planning and execution needs of freight forwarder operations.
(6) SAP’s SCE convergence vision is extensive and noteworthy.
CAUTIONS
(1) SAP has a modest number of live customers holistically and extensively using TM, and several customer references stated they have long rollout schedules
(2) SAP sells its TMS almost exclusively to SAP ERP users, and it remains best-suited for customers committed to SAP ERP.
(3) SAP TM’s capabilities lag those of leading TMS vendors in this Magic Quadrant in terms of breadth, depth and product maturity; however, it continues to invest in filling functional gaps.
(4) Customer references have indicated that implementation time and costs can be higher than those of alternative offerings. However, it now offers
rapid deployment solutions to help address this problem when it comes to basic needs.
(5) SAP TM is a more complex product than many of its TMS competitors because TMS functionality can reside in multiple places — that is, in TM, ERP and stand-alone applications, such as railcar management and partner solutions. This was not a design flaw but an intentional strategy to protect the investments of ERP users.
(6) SAP has no multitenant SaaS TMS strategy, and its trading partner (carrier) connectivity strategy is nascent and unclear.
(7) SAP is building a noteworthy ecosystem of TM partners, but given the number of live customers, these partners should be appropriately vetted for TM experience and expertise.
Alerting is not available for unauthorized users