I recently performed a upgrade of one of our customer SAP CRM systems form SAP CRM 7.0 EhP0 to SAP CRM 7.0 EhP3. In this document I’ve collected the errors we encountered during the service pack upgrade as well as the relevant notes to solve them.

In addition to the service mention in the note I also had to activate the service /default_host/sap/webcuif/uif_callback before being able to log into the Web UI again.

After every service pack or EhP upgrade all enhanced Web UI components need to be checked and maybe adapted. The following note describe the necessary steps:

Note 1570869 – Adaption of enhancements after SP or release upgrade

During the upgrade to SAP CRM EhP3 I encountered the following error message in quite a number of the adjusted BSP components: BSP_WD_TOOLS 225 “Multiple usage of view … is not allowed”. The reason is that SAP moved some view into separate view sets. These view sets are then included into the windows. If one simply copies the changes from the SAP Repository.xml to the one in the enhances component, the views that were moved to view sets views are included twice in the window. The following screen shot show an example of such an issue in the component BP_HEAD: 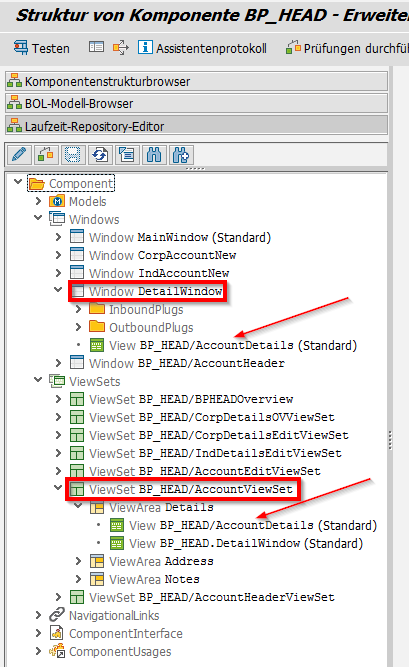 In order to solve this issue, the unneccesarry embedding of a view (in this case the second one in the screen shot) simply needs to be deleted from the Repository.xml.

During our upgrade the issue described above occurred in the following components:

Besides the changes in UI components I also encountered some notable changes to some APIs we frequently used in our custom developments.

Errors after the EhP upgrade

After the EhP3 upgrade I noticed the following errors:

Using ATC during an EhP upgrade

During the EhP upgrade I noticed, that the ABAP Test Cockpit (ATC) can be very useful during an system upgrade. Instead of performing a lot of manual test to find the problems e.g. related to API changes I simply ran an ATC check across all custom development objects. The results of the ATC check already highlighted most of the problems mentioned above.

I hope this information is useful for anyone performing an EhP3 upgrade in SAP CRM.

if you are reading this blog post maybe the following workshop is interesting for you as well: March 26, 2014: Deep-Dive Workshop: SAP CRM for Utilities new Ehp3 Developments in Walldorf, Germany (in English)

Hi Cristian, I have a CRM site running on CRM7 wanting to upgrade to CRM7 EHP3. My customer have doubts whether EHP3 is a stable version. We are using mainly the following functionality: Account and Contacts, IC, Business Activities, Agent Inbox, Marketing campaigns. How do you experience the EHP3 version? is it mature and stable? Any special issues? Is there any sense in upgrade to EHP2 rather EHP3? Thank you very much, Uri

the current release of SAP CRM EhP3 is Support Package 04. This means SAP already released 4 service packs for EhP3. Usually the first release of an EhP (i.e. SP00) is a little shaky. After that the EhPs are usually stable. EhP3 is from my point of view a solid release with many live customers. So there is no risk in upgrading.

With EhP3 already released I'd recommend to upgrade to EhP3 directly instead of going to EhP2 first. If you upgrade to EhP2 you can already start to plan the next EhP upgrade the day you are finished with the current one.

As EhP0 to EhP3 is quite a large step you can expect quite some work in custom developments as some APIs have changed and even the BOL models for business partners have been changed in some areas. The overall effort depends heavily on the amount of custom code you have in you system.

So far during our upgrade process we have seen that the Entreprise/Embedded/Full Text Search provided by SAP is something that was very broken by SAP in EHP3 including SPS03.  SAP has note fixes, so SPS04 might be more stable, but it appears beyond the points mentioned above the real issues are going to be in custom code and stuff SAP changed in Netweaver 7.40 and failed to test 😉 .

That being said it's been stable enough for us to proceed forward to QA with SPS03 hopefully be using it productively within the next month.

Thanks a lot for educating this information 🙂

We are running  following setup.

We looking at option if we can upgrade our CRM to latest CRM 7.0 EHP3 to use latest features in CRM CIC by introducing FIORI and Mobility features without touching ECC upgrade as we have plans to consolidate 2 ECC into one ECC it may run for a while. In the mean time we would like to upgrade CRM only.

Please let me know if there is any CRM 7.0 EHP4 upgrade dependency for ECC 6.0. I already ran UDA tool but I didn't get any relevant information.

As you might know, SAP only recommends and supports  the usage of certain version of ECC together with CRM. For SAP CRM 7 EhP3 it is ECC EhP7. However, in my experience it is possible to combine different versions. We are currently running a CRM EhP3 together with ECC EhP6 for one of our customers without any problems. Furthermore, there wern't any issues during the upgrade at all.

From experiences with last projects I'd suggest the upgradeing only the CRM system should be OK in your case. If you encounter problems the will most likely be in two aras:

Thank You Christian. It is very useful information. Let me do more research in around CRM MW related dependencies. If you come across any SAP Notes or dependency info please let me know.

Thank you for posting this great blog. I could not find any information regarding the need to be on SAP ERP EHP7 for CRM 7.0 EHP3. I also checked the upgrade dependency analyzer.

Can you please share some insight on compatibility with SAP ERP?

please see my answer Prasad Pithani asked earlier. As mentioned there we were running SAP CRM EhP3 together with SAP ERP EhP6 without any problems.

Thank you for the reply. I was just trying to clarify where you wrote SAP only "recommends and supports CRM 7.0 EHP3 with ERP EHP7".

Please have a look at the following documents:

Have you faced any such issues with WCF_CC?

I didn't have any problems with transaction WCF_CC. I used it to correct most of the problems with the enhanced components. Only in very rare cases I needed to do manual adjustments to the Repository.xml.

'Context node 'some node name ' not found error in lots of component in WCF_CC transaction . And for those transaction webuo is giving xml error.

Can you suggest how can we correct context node not found error.

I can send you screen shots if you provide me email id.

But to summarize error -

when I run WCF_CC for enhanced component (there are 3-4 ) , I get error under node UI COnfiguration . The error says ' COntext node attribute doesnot exist'

there are couple of more component with same error.

can you simply attach a screenshot of the error here?

I could narrow down to the exact component where xml parsing is failing at runtime. When I try to modify/correct it from component workbench , I get error -

And runtime repository doesn't get loaded.

How can I correct this issue.

Hi , Just to update you on the issue - I see that a new context node is defined in runtime repository -interface controller.

This context node is not present in unupgraded system. I am not sure if this is causing issue.

unfortunately I'm not able to see the image. simply attach it to your comment using the little camera icon in the editor.

If the runtime repository doesn't get loaded there is a bug in the XML. Did you do any adjustments to the component after the upgrade already? To fix this problem locate the corresponding BSP component. Simply search in SE80 for a BSP component with the name *<component name>*. One you found the BSP component try to fix the XML issue. For example you could simply get a previous version (prior to the upgrade) from the version history. An other option is to copy the standard repository.xml and reintegrate the custom enhancements.

We have followed SAP note 1836701 and resolved this. thanks for your suggestions.