So it seems that finding out what happened to an entry/assignment and why is also an issue. Here are some hints on how.

Please note that these are not official table definitions. Views that start with idmv and mxpv are public and stable, but the tables themselves can and have occasionally changed.

All provisioning tasks are audited, the combination mskey, actionid, auditid is unique in the system. Any task that is started using the IdM UI, Rest interface, attribute events, privilege events etc. will get a unique AuditId. If the workflow processes triggers addd

The main audit table is mxp_audit. This contains a single row entry for each task/event that has been triggered for your entries. Some notable columns:

A fun/useful thing to do with the audit includes checking the average execution time of a task from start to end over time. Change taskid=X to taskid in (x,y,z) to get more tasks or extend this sequel with a link to mxp_tasks to use tasknames and be creative. I suggest keeping it limited to a few tasks or the results might become difficult to interpret.

This calculates the average time between start-time and end-time of the task with id=1 (SQL) and 20 (Oracle), and I suggest using the taskid for Provision or Modify to test this. ProvStatus >= 1000 are completed, those still running will have no statusdate worth using in this case.

On SQL Server changing the length of the convert statement to 7 characters you can group it by month, 4 to get per year. On Oracle you can change to to_char conversions to YYYY-MM, or just YYYY.

You can also query for posteddate between two dates and much more. This is also useful to spot negative trends over time, but you must consider the overall load of the system. This is also useful during testing and tuning to verify if improvements you do have any impact on a full workflow execution. List all tasks that have been executed on a user (SQL Server and Oracle):

mxp_audit.taskid can be linked to mxp_tasks.taskid to get the taskname when accessing the mxp_table instead of the view (which has an unfortunate top 1000 limit).

The extended audit is stored in mxp_ext_audit. This contains a single row entry for each task/action executed within an audit and is enabled by checking the “Enable trace” checkbox.

The extended audit is useful for when you need to see what happened in subtasks, what conditional or switch statements returned or find out where a workflow stopped for a user. This query lists all tasks started by and including auditid 1307812, but can easily be modified to filter on aud_onEntry (mskey), and dates.

The red arrows shows a child audit being started, in this case by a uProvision call in a script, and the green arrows show where the child-audit is completed and allowing the parent audit to continue from its wait for events state. 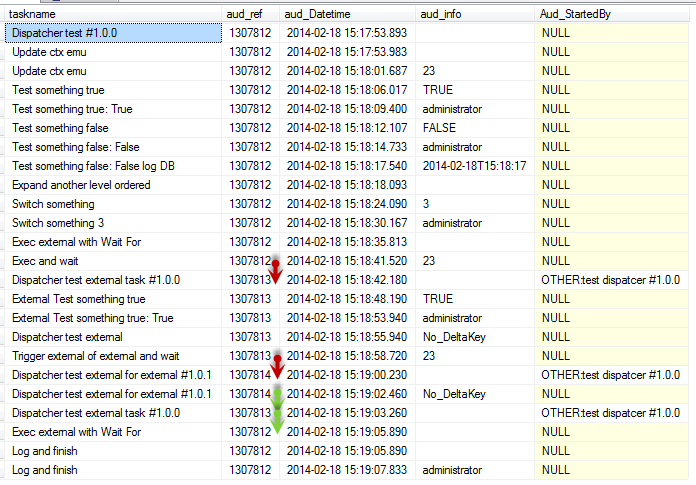 (SQL Server only for the moment)

It is also possible to use the audit and extended audit to list task executions per X minutes between date A and date B:

Audits related to evaluation and processing of reference values (role/privilege assignments, manager and other references) have information stored in mxi_link_audit (also see mxi_link_audit_operations). This has a lot of columns and I suggest you look at the views and see what is there. Some of the key columns are:

Example data from idmv_linkaudit_ext2 view for an audit in which a role was added to a person, which caused to two inherited privileges to be assigned. Later the role was removed.

Note that a new audit be created only when there’s an event task execution. The privilege in my example only had a del-member event and this event got a new audit (944072), the rest shared the add-audit of the role they were inherited from.

There are additional logs in jobs and actions that are stored in base64 blobs in the database. From SP8 we’ve added a new log, the execution log, which now stores messages from the runtime logged with uInfo/uWarning/uError.

This contains the logs of all jobs and actions as well as other useful values. Some columns I find useful are:

One of the things this can be used for is to calculate how many entries per second an action/job processes.

This can give valuable hints about actions or jobs that are slow and will cause problems at some point in time. In this case my “Test something true: False” task is slow and needs a look. You can also reverse this by calculating totalTime/totalEntries to get time used per entry. This can be used in combination with the threshold log when running mass-update/performance tests in dev/qa cycles to detect potential issues before they cause downtime in production.

This is a new log that has been in hiding for a while as it needed a UI. It still doesn’t have one outside the MMC, but it is very useful. This log contains all the messages from the runtimes that would usually be locked inside the big blob of mc_logs or the dse.log file on the file system. So in short, this means that messages like this one:

Are now also logged individually and linkable to the user and auditids. My root audit was 1316231 so this query will find all related audits and list runtime messages reported during the processing of these audits:

This output would usually would be “hidden” inside the logfiles associated with each individual job:

There is a lot more to the execution-log though, so have a look at it when you get your hands on a version supporting it.

Pulling it all together

To summarize there is

And combining all this information can be done using joins and unions: 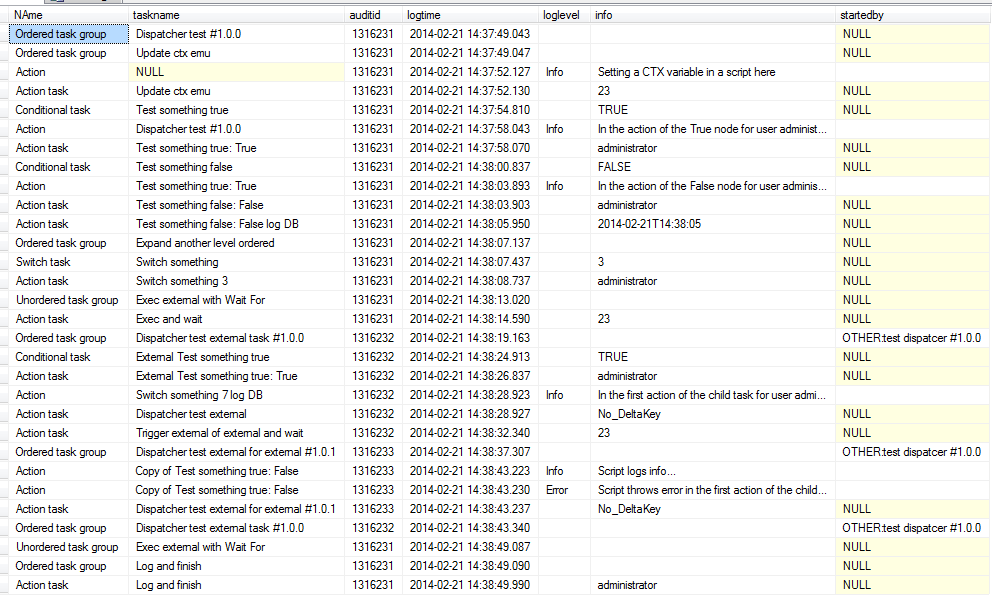 And that I believe is all the detail one could look for on the processing of a specific task, “dispatcher test #1.0.0” through two child tasks and back, for a user all in a single view. I’m sure there’ll be an admin UI for this later, but for now I expect this to be most useful in the development and QA cycle.

Chris, another great insight into the back end of IDM! Thanks!!!

This really is a wealth of information Chris. I'm glad I finally had the time to sit down and read it much less be able to use it prior to this blog release. Thanks again for your knowledge sharing.

In the mxi_link_audit table, can you please tell us what the possible values for AuditID are and what they mean?

according to the table in Chris' description it is a reference to mxp_audit.auditid.

Therefore it should be a number and I expect to should only see values of mxp_audit.auditid.

Andreas, the values are usually something like 0, -1, 1.  What I'm looking for is what these numbers represent.

The definition of the table is that this a link to an auditid in mxp_audit, or -1 which is the default when no value or NULL value is provided as auditid (and should be fairly rare).

Entries made before an audit exists will have 0 in linkaudit I believe. AuditIds are only available after a provision task (process) is initiated/put in the queue, so any operation that happens without an actual provision task running (before or after) will not have an audit to use in mxi_link_audit. For example when setting a link from a job. When the link is evaluated and a process is started for validate or addmember it will get an audit, but not until then. And roles/privileges without validate or member tasks won't have validate or member tasks audits to use...

You can also do assignments using {DIRECT_REFERENCE=1} to bypass validate & addmember tasks (or delmember for that matter) and this will also be reflected with val/add/del-audit=-1 in mxi_link and link_audit (if I remember correctly).

After trying a little bit I were successful moving the putting the round()-function far most out...

PS Is it possible to get syntax highlighting in a reply/comment?

I tried to execute the statement under "Pulling it all together", but the view MCV_EXECUTIONLOG_LIST doesn't exist. Is our installation missing something? We are running 7.20.8 2013-09-18.

I would say that this feature appeared starting from 7.2 SP9.

You are right. This view was added in sp9p0. The definition of it is simple and does not depend on other updates, and is dropped and added again on every update so I've added its definition  to the blogtext. It should only be run by those running pre-SP9 releases.