Lessons Learned from Google’s acquisition of Nest: Is SAP missing an opportunity with hardware start-ups?

Lately, I’ve been reading / researching about hardware start-ups active in the Internet of Things (Iot) space.  Although the recent purchase of Nest by Google was one motivation behind this interest, I was more curious as to how this new phenomenon impacted SAP’s activities in this area.

Note: I’m not an electrical engineer. I’ve been reading a lot lately on this topic but this blog might still contain hardware-related technical errors – so bear with me with as I explore.

Let’s start with a very high-level view of the fundamental IoT architecture.

The hardware aspect is composed of devices / sensors that create data.  This data must be processed somewhere – this data is often processed in the Cloud. There are various ways in which this data is passed to the Cloud – either directly via WiFi (for example, via FlyPort Pro Modules) or indirectly via an intermediary (for example, the BERG Cloud Devkit with its BERG Cloud Devshield and BERG Cloud Bridge).  The Cloud software then provides the ability to manipulate the device-created data.

Note: There are some examples of Internet of Things devices that do not communicate with the Cloud.  For example, the NyMi armband communicates via BLE / Bluetooth with other devices and currently has no Cloud component although this may change in the future.

Here are descriptions of a few representative Cloud environments:

Making one connected device is easy — scaling is often where it gets hard.

Without some sort of cloud service, your internet-connected things can only be accessed on your local network (i.e. while you are at home), unless you want to “tunnel in” to your local network, which often means dealing with firewalls and port mapping. Yuck.

The Spark Cloud brings your Core onto the real internet, and gives it a REST API, so you can access it from anywhere. It also creates a secure environment without forcing your web browser and the Core to speak the same language, which would be taxing on a low-power, low-cost microcontroller. [SOURCE]

One of the more interesting examples of this complete scenario is from a company called SuperMechanical with its product “Twine”  which has various sensors that measure temperature, moisture,  vibration, etc. The device has a web-based rule engine (which runs in the Cloud) that associates sensor-based events with actions (send mail, send text, etc). 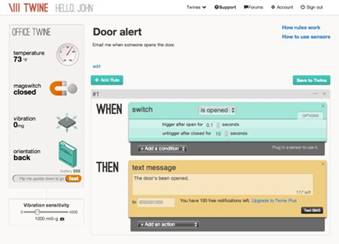 There are various layers / degrees of complexity that could be added to the generic IoT architecture.  Here are some examples from more established vendors who add additional functionality:

There is also the potential to reduce complexity. The popularity of such hardware kits such as Arduino , Raspberry Pi and Spark Core shows that such technology is available to a broader developer / user community.

Note: Some might say that the Arduino and other hardware kits are just a toys for hobbyists but they are also the entry point for individuals to start experimenting with this technology.  An interesting story that demonstrates how this introductory technology can lead to full-blown products is described in this blog which involves a hardware product called Moistly. Indeed, someone has used this technology to create an open source version of the Nest Thermostat.

SAP and the Internet of Things

This “integrated portfolio” is based on an architecture that supports SAP’s activities in this area. 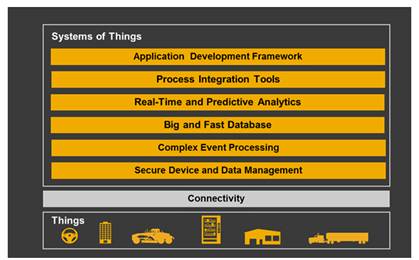 SAP has also partnered with a variety of companies including (SK Solutions, Hamburg Port Authority, Ericsson, Pirelli,  etc) to meet the increasing demands / interest in this area.

The broader SAP ecosystem / developer community has also explored IoT-related topics as demonstrated in a few DemoJam entries (for example here is one about Raspberry Pi and HANA) or HANADeck.

Yet much of this focus has been on the exploitation of SAP’s existing partners / customers to support these entities in their IoT-related interests.

One important potential customer base has been largely ignored by SAP: hardware start-ups.

Yes, I know that SAP has an accomplished start-up program with a variety of involved start-ups. Yet the focus here is more on software rather than hardware start-ups. The primarily interest in such software-focused start-ups is that they should embed HANA within their existing / planned software architectures. The same trend is present in the SAP Ventures with one exception – an investment in FitBit .

One of the newest trends in technology are hardware start-ups which create innovative devices.  There are a variety of start-up accelerators that focus on software but a new breed of accelerator is emerging that focuses on such start-ups.   One example is “HAXLR8R” which is a new kind of accelerator program for people who hack hardware and make things”.  The schedule for start-ups in the program demonstrates a decidedly hardware focus. 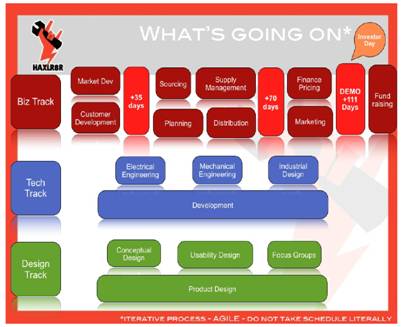 The start-ups in this program have innovative ideas. Many of the start-ups in this program – and indeed other Internet of Things start-ups as well – have the need for a software component as well. Yet, SAP is rarely evident in such hardware start-up circles.  Such hardware start-ups look to other partners for software-related requirements – one example is the recent decision of start-up Streetline to work with Cisco and that despite an existing partnership with SAP and the SAP-related history of CEO Zia Yusuf

Scenarios for SAP to increase its involvement with hardware start-ups

As the Nest acquisition demonstrates, these hardware startups have a critical role to play in the Internet of Things.  Yet, currently, SAP has few activities in this area.

As I considered the missed potential of this group, I was reminded of one of the IDC IoT predictions for 2014:

There is already considerable momentum in the industry around partnerships between hardware vendors, software companies and network operators but 2014 is the year when we will see unlikely partnerships emerge to form an IoT ecosystem that will benefit all. There will be a strong push towards adoption of open standards that will further accelerate collaboration across vendors.

What such partnerships might be appropriate / advantageous for SAP to get more involved in this space?

Note: I’m not suggesting is that SAP start manufacturing hardware as Berg has done rather I’m proposing that SAP move to position its software platform (for example, HCP) as the means to interconnect these devices to HANA-based technologies.

As mentioned above, SAP has an IoT architecture that is available for such endeavors but to be truthful, it is much too complicated for many hardware start-ups.  The need for such complicated / mature architectures in IoT environments is necessary as such companies develop but initially it is overkill. The question is what can SAP offer such start-ups that enables them to concentrate on the hardware rather than the software components of their products.

Some might question whether SAP has anything at all to offer such start-ups.  A single / isolated hardware device that only communications via BLE with an individual consumer’s smartphone probably has little need for a Cloud component. However, such hardware start-ups probably want to sell more than one gadget – the mass market is where such companies make their money.   In order to support the resulting involvement of external developers / partners as well as better understand usage patterns / manage their gadgets, start-ups probably require a Cloud component. 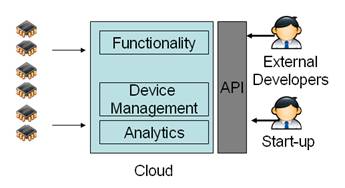 SAP could provide the technology that permits such hardware start-ups to fulfill these Cloud-related needs.  The HANA Platform provides the ability to quickly and efficiently create mobile applications and analyze mass amounts of data (as to be expected from IoT gadgets). Why should developers from hardware-start-up create this functionality again?

What are the broad scenarios for the architectures in such settings?

The first involves the combination of non-SAP and SAP elements. 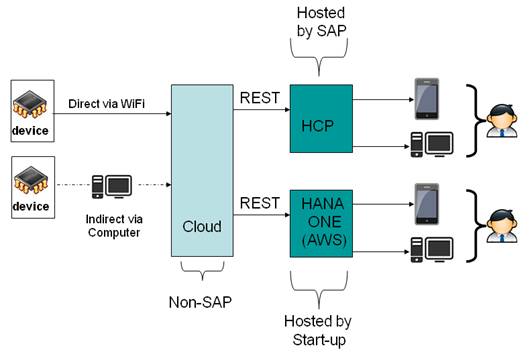 In this scenario, a partnership with existing device vendors – many of them have cloud functionality that is private to their devices – could be the focus. SAP should complement this existing functionality rather than replace it.

The second involves the use of only SAP elements and could probably include the existing SAP IoT stack mentioned above.

The second scenario would be perfect for mature hardware start-ups with a large number of deployed gadgets.

The combination of both scenarios would provide support for a variety of hardware-start-ups in different stages of maturity.

Note:  It is also possible for such devices to contact SAP assets directly. For example, it is possible to use web sockets with the Arduino – combine this with the recently-added web socket functionality in the HCP and you have an interesting application.

Let’s take a look at few concrete suggestions on how SAP might increase its involvement with such start-ups.

Talk to such groups early and suggest ways that can help such companies deal with software-related problems. Go to hardware accelerators and present the HANA Platform.

Often hobbyists working with Arduino and Raspberry Pi have to deal with software-related issues which are similar (although perhaps at a different scale) to those of full-blown hardware start-ups.  The HANA Cloud Platform (HCP) is one means to enhance their gadgets – it provides an environment to quickly and easily create a mobile app to display data coming from the Arduino environment. Use the Mobile Platform on HCP to administer such gadgets.

Currently, SAP doesn’t have any cloud-based APIs that are available to specifically support IoT / hardware start-ups.  I know that there are some examples of IoT projects running on HCP (such as the Smart Vending Machines) but these are based on non-public APIs / frameworks. If you look at other platforms such Pivotal, there are frameworks such GE’s Predix which are specifically focused on this area.

So, what do we learn from Facebook's acquisition of WhatApp...?

I think the two acquisitions are quite different and were motivated by very different reasons.

How hardware  can communicate using oData with SAP.

How information from hardware will be extracted.