My First Tech Love – More Than a Machine

For many of us growing up in the eighties our first Tech Love was the video game. Large clunky machines that possessed the power to hypnotize young men into spending their last hard earned dollar on graphic objects and characters that jump swing and fly around an imaginary world made of pixels.

Of course back then the pixels were much larger in fact they were huge and the screen resolution was by today’s standards, well… just bad.

But we loved them – we became addicted to them – we spent hours upon hours staring at a screen that provided us with visual, sensory, and mental overload.

Our parents said it was a waist of time, a waste of money.  “Find something else to do outside,” my mother pleaded,“something worthwhile!”

For many of us it was never a waist of time or money, but rather, it was extremely stimulating for the brain and kept us out of trouble.

But who could ever forget their first personal home computer? My first Tech Love wasa personal computer and video game system all in one.  The  Commodore 64! 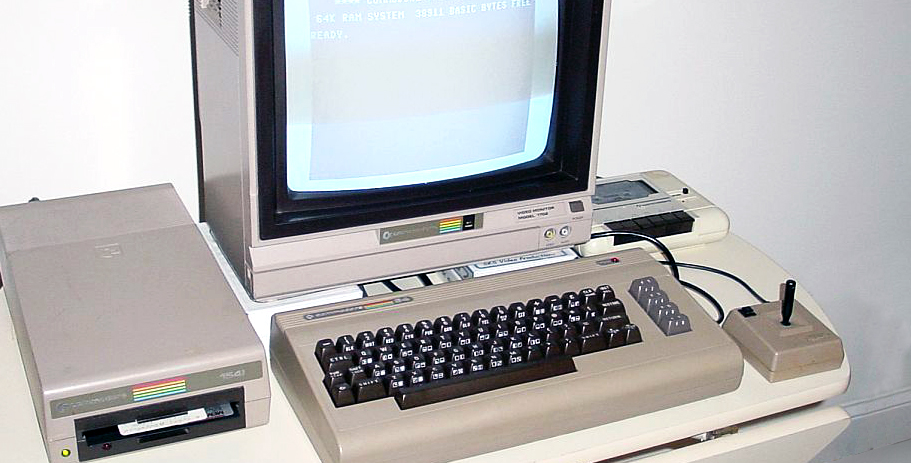 Born in 1983, The Commodore 64 was a computer that housed its CPU within a simple key board. It had no monitor because you hooked it up to your TV set; and if you wanted to write and save your own programs you needed  something called a floppy drive.  A floppy drive took floppy disks (a relic by today’s standards – it was about the size of a CD but housed in a square paper like casing,hence the name Floppy).

This wonderful piece of machinery was not only a personal computer but also a video game system! With a whopping 64K of memory! [ That was huge in those days.] As a matter of fact, Commodore held a massive share of the home computer market; beating out Apple and all its competitors from 1983 -1986 and still remains the top selling computer of all time.

With that said… this technology was amazing! The 64 did everything from personal computing to video games, and it housed the first digital dictionary and almanac that I had ever seen. Not only did I write my first programs on it, but I reminisce about countless soda-drinking pizza-eating days and nights bonding over this device with friends that remain close to this very day.

So this was my first Tech Love. What was yours?

Do you have a story about your first tech love? Join SCN and post your story here on Customer Edge. Or, if it fits into 140 characters—send us a tweet and a pic @CustEdge on Twitter.  For inspiration, take a look at our video about why the best connections are personal connections >