Online buying and selling is almost as old as the Internet itself.  eCommerce companies such as Amazon and eBay are true pioneers and their successes are undisputed.  Many other sites, dedicated to buying and selling have followed – focused on specific product categories and brands — launch every day.  A significant number of them have associated mobile apps; although most were specifically designed for the desktop, with mobile as an afterthought.  Increasingly, eCommerce sites now utilize Responsive Web Design (RWD) – those that provide an optimal user interface experience, regardless of the display type from mobile to desktop. In virtually all cases, mobile was an add-on – in other words, the site, product, or brand, first builds their online presence and the mobile views are added later.

Mobile-first is a relatively new concept whereby the seller focuses first and foremost on the mobile experience as the primary user-interface for the eCommerce endeavor.   Mobile-first sites typically target mobile devices in their initial launches with some also utilizing responsive web design and some launching with a mobile app.

As of Q3 2013, social networking giant Facebook accounted for 874 million mobile Monthly Active Users (MAU) with 507 mobile Daily Active Users (DAU). These numbers do not include the 150 million Instagram users – the popular mobile-first, photo-based social network.  Over the past 15 years, Online Social networks have sprung up everywhere and it is a concept that works.  Whether it is an online forum, dedicated to a single hobby or an enormous, general community such as Facebook, almost everyone with some type of online presence has or is participated in an online social network. Some have done a good job of monetizing this social structure, while others have not.

But what if we take the concept of mobile-first , an online marketplace, and social network qualities and combine them into a Mobile Social Commerce site?  (maybe at this point, we coin the name: MoSoCo.)  Then we have a mobile commerce site, focused primarily on mobile devices, with a heavy social aspect.   At this point, you’d say, “well, on Amazon, you can leave feedback.”  True.  You can on Etsy as well; however, neither Amazon nor Etsy, or eBay for that matter, were mobile-first.  “Mobile” was added well after these were established online marketplaces.  Furthermore, a feedback mechanism is not really a social commentary in the truest sense.  Does such a company exist and is it successful? 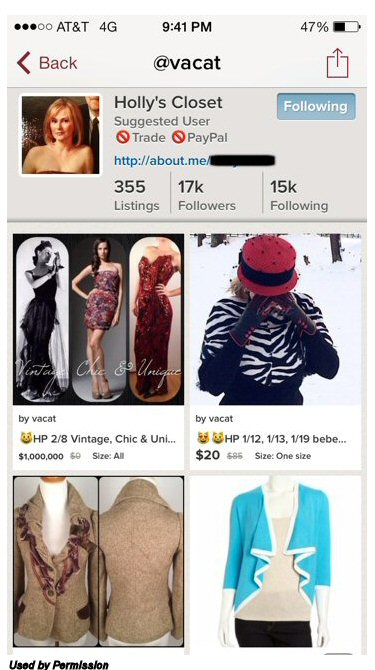 I think so and it should serve as a blueprint for extending social network concepts into mobile-first marketplaces.  A Menlo Park company called Poshmark has achieved the best of Mobile Social Commerce.  Poshmark’s tag-line is “Poshmark is a fun and simple way to buy and sell fashion. Shop the closets of women across America – and sell yours too!”  From their initial launch in December 2011, they have always been primary focused on the mobile user – initially launching on iPhones, later supporting iPads.  They added Android support in October 2013.   Poshmark does support RWD, so desktop and users of another mobile OS are still welcomed.

According to the Poshmark Closet Sharing Economy Report, their users have bought and sold over 1.5 million items from each other. It is interesting to note, that Poshmark really promotes their mobile-first heritage.  In the Poshmark Closet Sharing Economy Report, they note: ”Mobile means the Closet Light is on Friday Nights: Smartphones make shopping accessible 24/7, thus leading to an earlier weekly purchase cycle than traditional brick and mortar retailers which see their highest activity on Saturdays.” While Poshmark doesn’t release its user counts, I estimate that there are around 2.2 million Poshmark users.  Other sources note that of that 2 or so million users, around 250,000 are active sellers – meaning the remaining are likely buyers only.  The women’s fashion industry is expected to exceed $621 billion in 2014, based on statistics from the research firm, MarketLine.  Clothing retailers are expected to contribute 65% to this global total.

Marketplaces such as Poshmark focus on clothing resale and as they note:  “Poshmark is more than just another shopping destination. We are focused on offering a one-of-a-kind unique experience in connecting people and their closets.”  In Poshmark-speak, a “closet” is a seller’s online shop – but it is also literally clothes from a seller’s closet – something that she wants to resell, or perhaps something new that she bought but never wore (perhaps even “new with tags.”).  In reality, many Poshmark sellers offer not only their own items, but items from friends or relatives.  Variations of closets include brick-and-mortar retail boutiques and import wholesalers. But the key for Poshmark is that it is solely focused on women’s fashions and accessories,  Poshmark sellers have uploaded over $350 million of inventory and upload over a “Nordstrom’s store worth of inventory every 2 weeks.”

The social aspect of Poshmark is what is so amazing.  Here’s an interesting statistic:  One closet that I looked at had around 300+ items for sale.  Across all of these 300+ items were over 22,000 comments (an unscientific measure is around 73 comments per listing)!  Some items had close to 1000 comments, while others had only a few.  Digging deeper, you’ll find that these are detailed discussions among dozens of people.  Some comments are detailed discussions about the item; other threads covered every subject imaginable.  Additionally, some listings were not items for sale, but designated “chat rooms,” or listings sharing significant life events: a vacation, a new baby, a new kitten, or condolences.  Some were very funny; others were very touching.  The bottom line is that Poshmark, as a mobile-first marketplace, is also a very significant social destination.  The women of Poshmark have created an amazing community that transcends anything that has existed in a marketplace of any kind before – mobile or non-mobile. 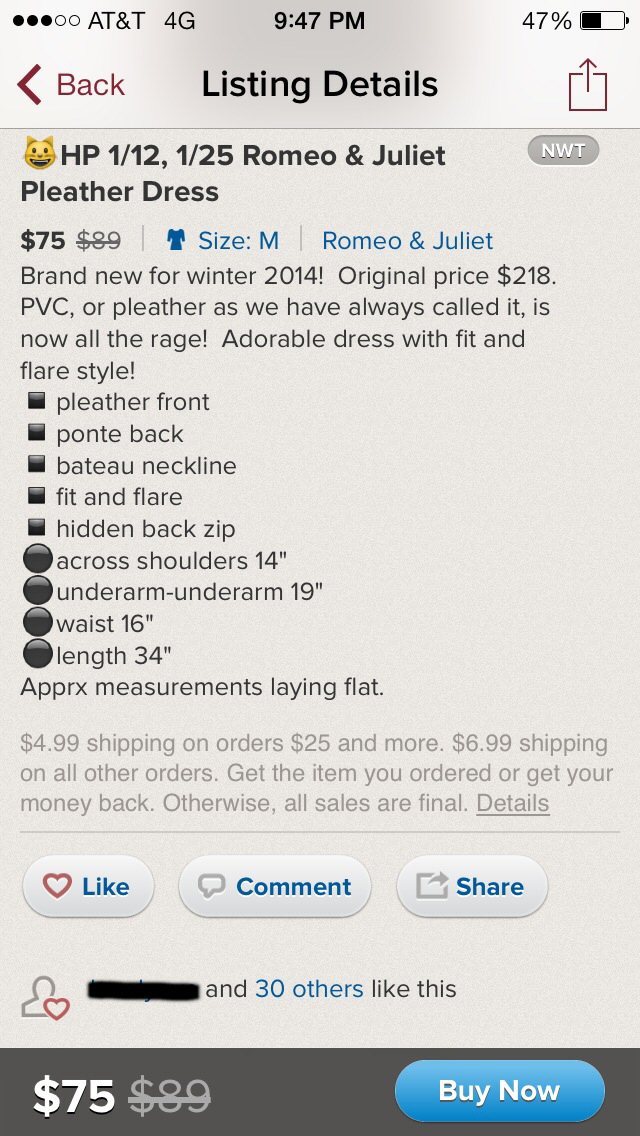 Poshmark closets also display how many followers they have as well as how many they follow.  There is also a concept of closing sharing.  Sellers share items in their closer to their followers, but they can also share other items in other sellers’ closets to their followers.  Everyone has a “feed,” which they can see these items.  This further adds to the social aspect of Poshmark and enables each seller that works at it to enable their items to get to more potential buyers.  Interestingly, many “Poshers” (as Poshmark users are called), spend hundreds of hours per month on Poshmark, listing items, sharing closets, and engaging in social conversations.  Many close friendships have been and are being forged through Poshmark alone.  Because it is mobile-first, all activities can easily be done through the Posher’s mobile device via the Poshmark app.

I’m pleased that Poshmark also enables Poshers to exchange information about an item via SMS – right from the app.  They also enable direct-uploads to other social media such as Twitter, Tumblr, Facebook, Instagram, and Pinterest, among others.  This further enables the Posher to promote their closet or item to others outside of the Poshmark community.  In fact, many Poshers that become friends, extend that friendship to include frequent texting (also an unscientific poll, but virtually all Poshers use standards-based SMS vs. a non-SMS-interworking OTT).

While the uniqueness of Poshmark makes it the clear leader in mobile-first, social commerce, there are few others that are trying to catch up.  A very similar marketplace called Threadflip is chasing Poshmark.  In their initial incarnation, they were more focused on desktop with mobile a mere afterthought.  However, as of the last 6 months or so, they’ve been moving more and more functionality to their mobile version, and they only recently added a social element (very much like Poshmark).  However, with Threadflip, there is no closet-sharing concept – one that can limit the social interaction as well as the ability to enable a seller to enhance the visibility of her items.  In Poshmark, sometimes the act of “closet sharing” serves as an introduction of two Poshers.   While Threadflip and Poshmark have some similarities, and, in a few areas, advantages over each other, overall, it seems that as long as Poshmark continues to evolve their experience (and they do still have some issues that their main competitor Threadflip tries to exploit:  such as non-fashion items being listed, offline transactions, boiler-place customer support), they can remain the leading Mobile Social Commerce marketplace for the foreseeable future.  This formula works and should be a blueprint for more to come.  Today, I believe mobile-first should rank as one of the top attributes of any online marketplace; however, enabling social interaction must also be considered as it can add a personal element to what has been (until now), a mostly impersonal buying experience.

Now if someone would just launch a MoSoCo marketplace for auto accessories, parts, and tools and where guys can share our garages!  GearheadMark, anybody?

The Japanese ISP company Rakuten very recently acquired the Voice/Messaging communications firm Viber.  As I write this, the Twitter-verse is going crazy with news, analysis and opinions on Facebook acquiring WhatsApp.

Last week Rakuten announced the $900 million acquisition of global communications service Viber. Of course, we think there are tremendous synergies for us, but this deal also represents a seismic shift in how people are engaging with each other, consuming content, and making purchases. What two threads connect them all? Mobile and Communication!

Second, Viber is a service that highlights new and innovative ways that people are communicating. If you told me a few years ago that people would be communicating with digital stickers, I would hardly have believed you. But they are! People are also using these platforms to share and consume digital content, including photos and videos, and to enhance business collaboration. In times of disaster when traditional communication lines fail, mobile-first communications platforms are where people turn to. Viber saw dramatic increases in use after the earthquake in Japan in 2011 and last year in the aftermath of Typhoon Yolanda in the Philippines.

Historically, telecoms companies have defined how people communicate. They offered us 3 options: phone, text, and, don’t forget, the beeper. Not exactly cutting edge. Now, dynamic marketplace-style app ecosystems have birthed new services that represent how people actually want to communicate. Oh, and these services are more fun, more reliable, and cheaper. I know where I will be investing.

Disrupting communication. Disrupting consumption. This is the future. This is why we bought Viber. Mobile Talks!

Unbelievable! It's huge number of members using giant network all round the world. Thanks for sharing.

Interesting article William. I see Mobile Social Commerce growing over the next few years and Mobile First becoming a standard approach to building the environments.