How to Push Customer Loyalty to a Fever Pitch 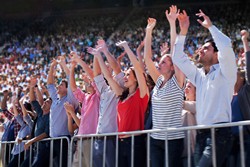 Professional sports teams have two problems that most businesses will recognize. The first is rising costs: The steady increase of player salaries (average Major League Baseball salaries, for example, rose 5.4% to a record of $3.39 million in 2013) puts pressure on teams to increase revenues at the same pace or risk becoming less competitive. The second is fan loyalty – and no, that’s not a redundant term. Fans by their nature are loyal to their team, but many sports organizations do a poor job identifying and rewarding their most dedicated supporters.

“It’s often not a question of winning or losing fans,” says Mark Lehew, SAP’s Global Head of Sports & Entertainment Industry. “Obviously if you’re a fan of a team, you’re not just going to switch loyalties because you get a better offer somewhere else. But sports teams often have a massive global fan base. Deepening loyalty through better engagement with all fans – not just the small percent who attend games – is a significant untapped revenue opportunity.”

Capturing this opportunity requires stoking fans’ passion not just during game days, but 365 days a year, through every conceivable channel – in person, on the web and through mobile and social media. What’s the best way to deliver a more engaging experience to season ticket-holders and casual fans alike? Beyond wins and losses, research by my colleague Rob O’Reganhttp://www.emediavitals.com/staff/rob-oregan has found that fans generally are looking for three things from the teams they support:

1. Engagement. For fans attending a game, waiting for the action to start back up after a TV timeout used to be wasted space. No more. For example, the Uphoria app from Major League Soccer’s Sporting KC gives fans access to live video streaming during the game, with a variety of camera angles and replay options along with real-time stats.
Improving the in-game experience extends beyond apps. Some teams have set up “war rooms” that monitor social media to engage with fans. The NHL’s New Jersey Devils, for example, created Mission Control – a room in its corporate offices staffed in part by its most passionate fans – to track conversations about the team and its arena and interact directly with the fan base.
Importantly, mobile or web apps can increase engagement before and after a game by giving fans new ways to interact with their favorite clubs. The NBA’s stats.NBA.com,http://stats.nba.com/?GameScope=Playoffs&PlayerOrTeam=Player&StatCategory=Points for example, gives fans access to 67 years’ worth of player and team statistics – an engagement magnet for fans and media alike.

2. Convenience. Contemporary sports fans can luxuriate in man caves equipped with 65-inch HDTVs, instant replay, abundant Wi-Fi and no waiting for the restroom. Combine these comforts of the couch with the rising costs of attending a game – a family of four pays an average of $444 to attend an NFL game, for example – and you can see why sports teams are scrambling to improve the experience for those few are willing and able to shell out the big bucks.
“Teams are looking for ways to create what we call ‘the best day of their life’ for fans attending a game,” said Frank Wheeler, global VP of sports and entertainment at SAP. Improvements include using technology to decrease the logistical friction that fans often face when attending a game: fighting traffic, getting in and out of the stadium, standing in long lines at the concession stand.
For example, the New England Patriots’ Game Day Live app features a notification system with updates on traffic, parking, and weather. Once fans reach their seats, they can even use the app to find the closest restrooms with the shortest wait times. An app for Barclays Center, home of the NBA’s Brooklyn Nets, lets fans in certain sections order food from their phones. Other team or stadium apps include options for purchasing tickets or upgrading seats.

3. Recognition. In the past, fans’ loyalty to sports teams was primarily a one-way street. Teams’ interactions with the most loyal members of their fan base – season ticket-holders – consisted mainly of contacting them once a year for renewals. Sports teams are looking to change this dynamic by embracing metrics that help them quantify the value of loyal customers beyond ticket purchases – and reward those customers for their loyalty.
Recognition programs can be as simple as an usher greeting season ticket holders by name as they take their seat. Membership and loyalty programs extend the relationship beyond game day and provide a more personalized connection between a brand and its fans.

Despite all these advances, few teams have all the information they need to get truly personal with their fans. Mobile apps are just the first step in this direction. The next phase – and the bigger challenge – requires utilizing detailed fan data to extend engagement, convenience, and recognition well beyond live events. Creating such a connection would be a clutch win for any sports team and its fan base.

Are you using any of these apps? How about apps you use to build loyalty among your customers? Please tell me your stories.