In this second exercise we’ll learn the usage of feature and update site.

4. install from the update site

5. do some operations on the OSGi console

First, we go back to our bundle-development and we develop a new bundle,

In the Activator-class, we modify the start() and stop() methods:

Note that we don’t export the bundle.

Enter a name (this is only the name of the project in Eclipse) and the details which will describe the feature: 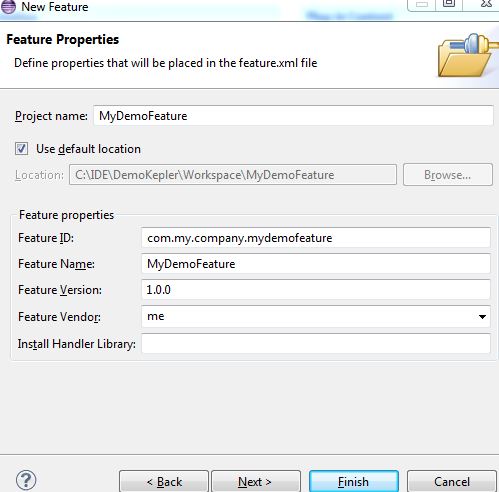 On the next page, you select the bundles which will be part of the feature.

Search for the bundle we’ve created in step 1, e.g. com.my.company.mydemobundle

Our new feature will consist of only one bundle.

The feature project is created and the feature.xml file, which describes the feature, is automatically opened.

Open the tab Plug-ins and check that our example plug-in is listed.

You may wonder why the version of the plug-in is set as 0.0.0

The reason is that in a productive environment, the exact version is determined on build-time.

But for our exercise, let’s explicitly set the version to the new version of our example bundle.

Ensure that the checkbox on the right pane, Unpack the plug-in after the installation is not enabled.

The reason is that typically we’d like to have all bundles packed as jar files in the plugins folder. 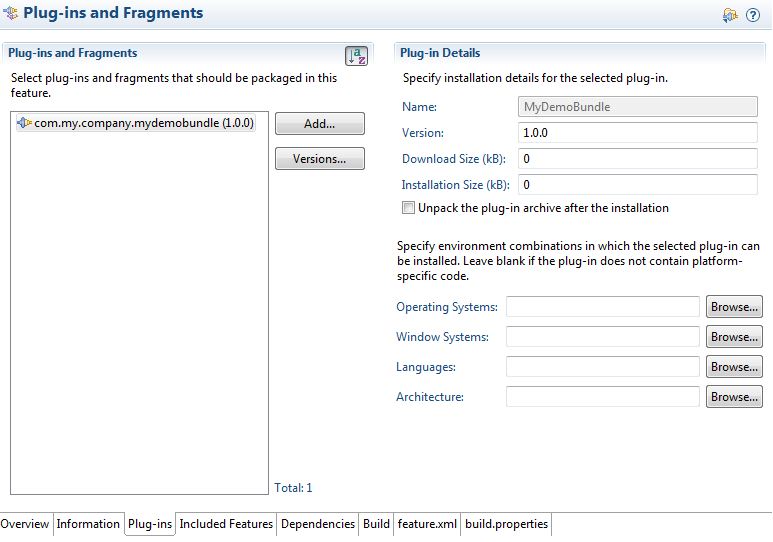 The tab Dependencies should be edited.

On Feature level, it is possible to define dependencies, which is an aggregation of the dependencies of each contained plugin.

Since collecting all dependencies would be too much effort for a human, this work can be delegated to the machine by pressing the Compute button. 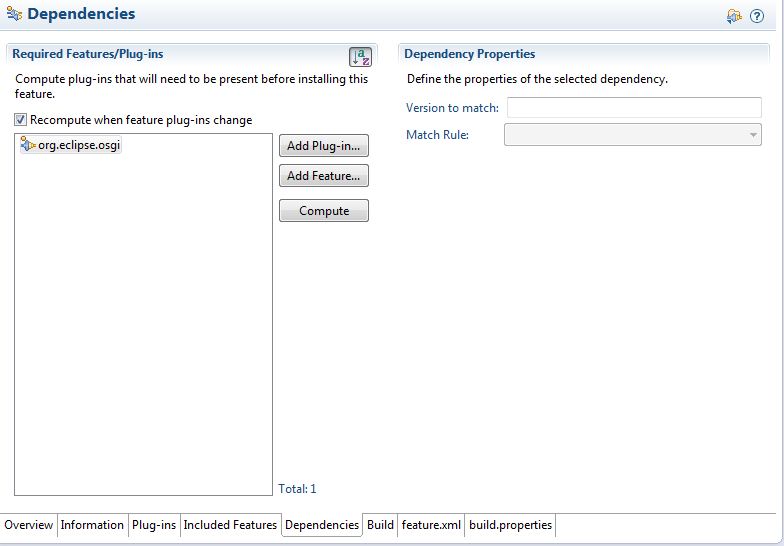 for certain reason (there’s no export), I’d prefer to specify a location outside the workspace, 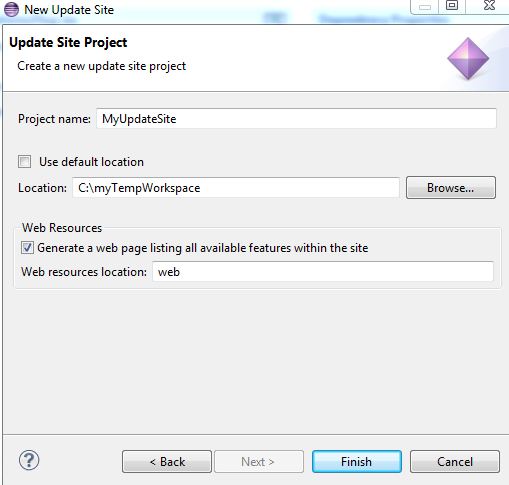 Open the site.xml file, if not opened automatically.

Create an own category – why not? – by pressing the button New Category.

Select the entry and provide Details for the new category in the right pane: the ID and the Name:

In the dialog Filter Selection, start typing mydemo into the field (which is a filter field), 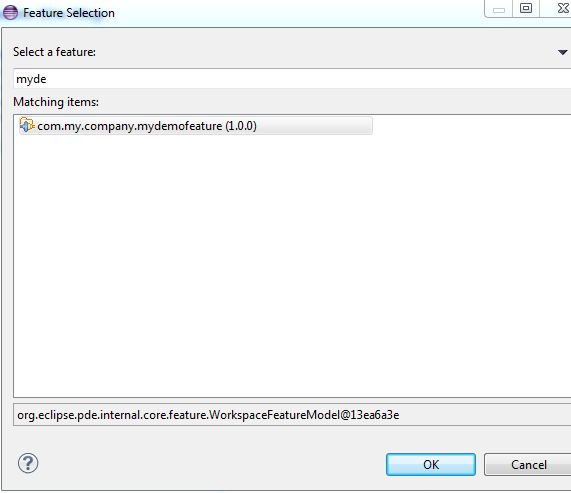 the feature is added under the category, as specified: 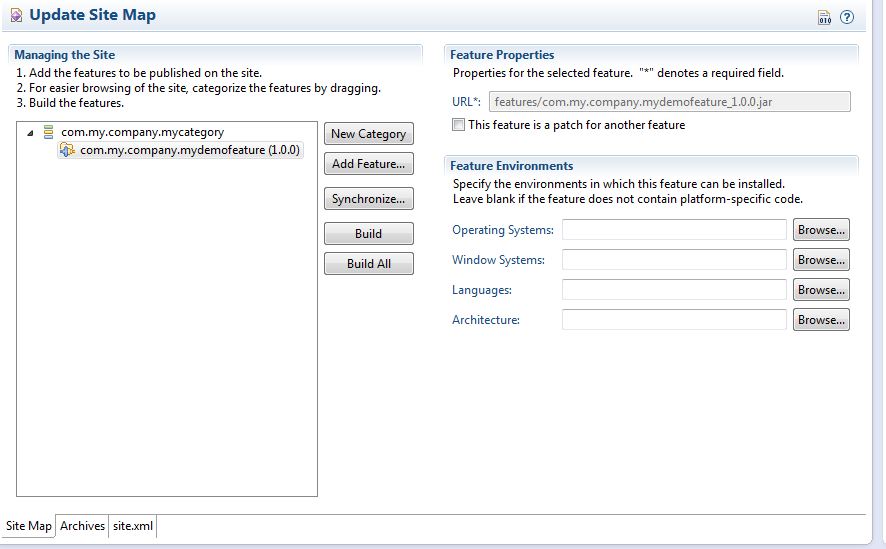 Until now, we’ve only defined the update site (including the category and the feature that we offer in our update site), but it cannot be consumed yet.

So, the next logical step would be to export our Update Site, but there’s no export wizard available.

Instead, we have a Build button in the editor, which has to be used.

If not open, open the editor via double-click on the file site.xml.

In the tab Site Map, press the button Build All and wait a few seconds.

The result can be seen in the Project Explorer in Eclipse or in the local file system:

The feature jar has been built.

The bundle jar has been built.

So this is the expected result, an update site that could be copied to a web server in order to allow users all over the world to install our bundle.

In Eclipse, we change to the OSGi console.

In order to make sure what is installed, type

The result is “No matching bundles found”

That’s expected, since we haven’t installed it.

In the right pane, press Add…

In the dialog, press Local… and navigate to the location of our update site root folder (in our example: file:/C:/myTempWorkspace/ )

Enter a name in order to recognize this entry, e.g. MySoftwareSite and press OK

Exit the Preference page with OK.

Now that we’ve specified a software site in our Eclipse, we can install from there (Note that this could as well have been done in one step).

In the “Work With” – drop down, choose this software site.

What the wizard does right now is to parse the site.xml of the specified software site and present all features, that are found, in the list below.

In our example, there’s only one feature: 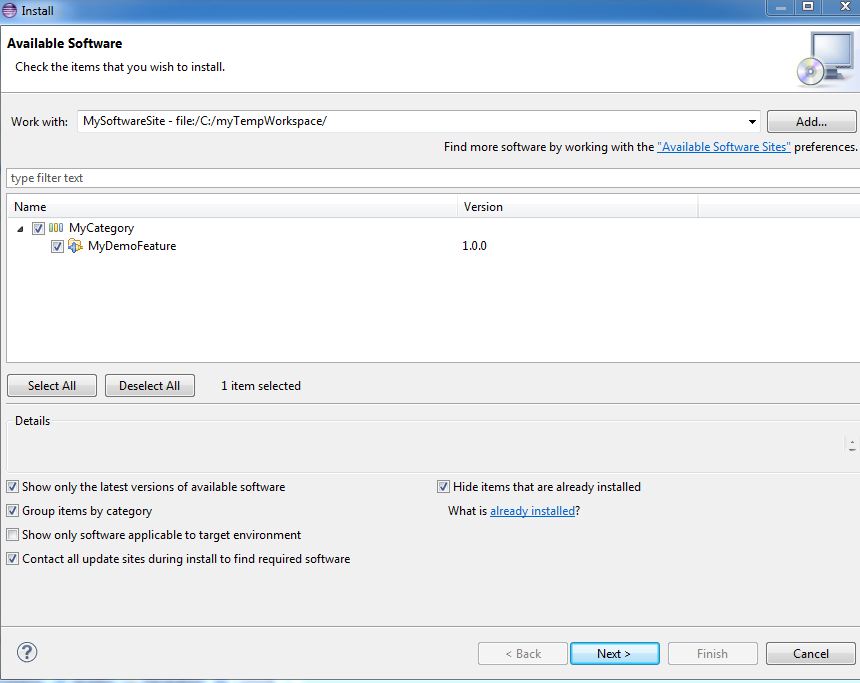 Make sure that the checkbox Group items by category is enabled, such that you can see our own defined category.

Step through the wizard, finish it and restart Eclipse.

Work with the bundle

Now we proceed as usual:

Check that the bundle MyDemoBundle has been installed and that it can be started.