In the Introduction to OSGi document we’ve learned the basics about OSGi and have learned lots of expressions and terms in the context of OSGi.

Now it’s time to leave the theoretical lesson and go for a practical hands-on workshop.

In this exercise, we will

2. export the bundle and install it

3. do some operations on the OSGi console

Why are we doing this exercise?

– We learn how we can communicate with the OSGi Framework

– We learn how the lifecycle and version management works in OSGi

In your Eclipse, open the Java-Perspective (Window -> Open Perspective -> Java)

Enter the project name, e.g. MySampleBundle, and choose “targeted to run with: an OSGi framework: standard”

This means that this bundle can run on any OSGi environment. 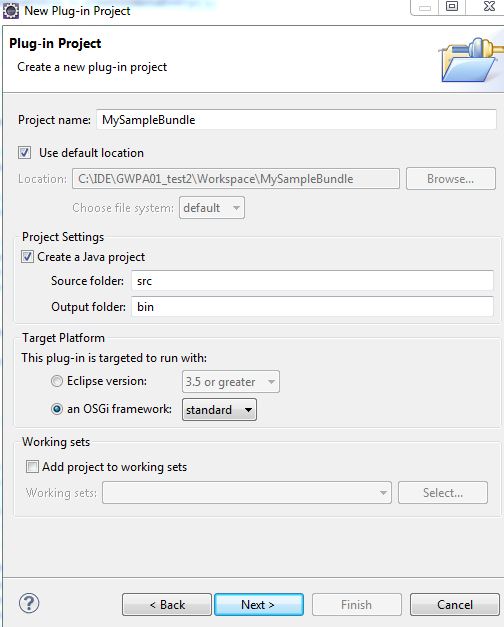 Press Next, enter the details as desired and enable the generation of the Activator class 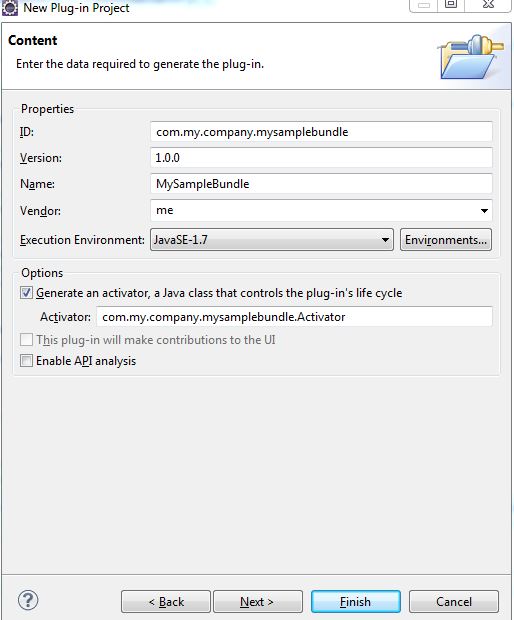 Press Next, de-select the template-creation and press Finish.

Furthermore, the project contains a MANIFEST.MF file in the META-INF folder

Right after project generation, the manifest file is opened in the so-called Plugin Manifest Editor.

The information gathered by the wizard is already present.

For our exercise, we don’t need to change anything here, but you may test the editor by doing the following:

You’ll see that the generator has already added a dependency to a package.

You can now press “Add” in the “Required Plug-ins” section,

select e.g. the “…common” Plug-in and

The result is a dependency to a Plug-in.

You know that there are 2 possibilities of defining dependencies:

Now you may select the added plug-in and press “Properties”.

In the popup you can see that:

You can reexport this dependency (such that other plugins, which depend on you, can enjoy of this lib)

You can define the version(s) of this dependency.

You know that the dependency management is very sophisticated

Close this dialog and open the tab “Runtime”

The dialog offers the one package that exists in our example.

Now this package is exported and can be used by plugins which depend on us.

You can choose if the selected exported package is visible for all plugins which depend on us,

or you can choose to only export the package for plug-ins which you select.

You’ve learned that the visibility management is very sophisticated.

Don’t forget to open the tab “MANIFEST.MF”, where you can see how the configurations which you’ve done are written into the manifest file

Open the Activator-class with double-click in the Project Explorer View.

You can see that this class has been generated as subclass of BundleActivator, which is part of the package org.osgi.framework, which has been added as dependency by the generator.

There are 2 relevant methods which have been overwritten, the start and stop methods.

These methods are invoked by the OSGi Framework, whenever this current bundle is started or stopped.

The generator has created code which stores the object BundleContext.

This makes sense, because this object allows access to the Framework, which provides access to bundles and services.

We’ll now add some lines to the generated code, which will allow us to see how OSGi works.

Add the following line to the start() method:

Add the following line to the stop() method:

But in order to gain a little bit more insight into the OSGi-World, let’s do the following:

Export our example bundle to the local file system, just like it would be done for productive usage (almost…)

In the Eclipse Project Explorer View, select your bundle-project, open the context menu and press “Export”

Select your bundle and choose “install into host. Repository:”

Enter the path to an empty directory. 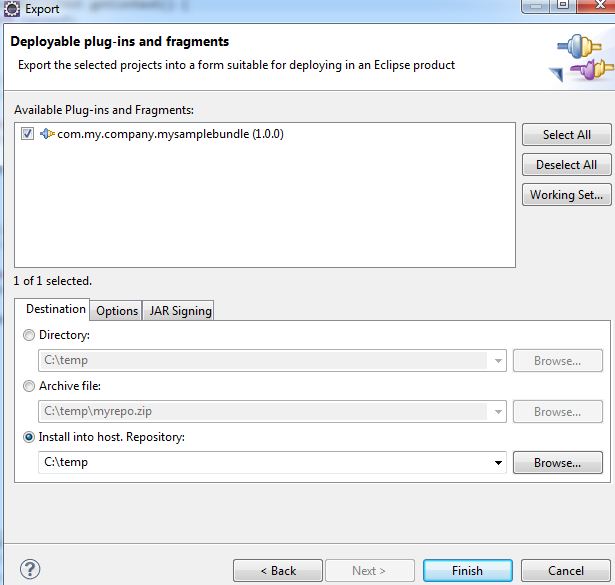 The wizard will do the following:

– Create a repository at the specified location

Eclipse asks to restart, since its installation has been modified.

In the meantime, you may have look at the file system, to see what has been generated:

Note: in the export step above, we’ve exported the bundle standalone. It would have been an appropriate alternative to create a feature, add the bundle to it, and export the feature.

Now check the bundles.info file: it contains an entry for our bundle.

Now check the folder configuration\org.eclipse.osgi\bundles: here, a new folder has been created for our bundle. The name is a number, which we’ll recognize later.

So we see that our bundle has been really installed.

In the meantime, Eclipse has finished starting.

You could now add more plugins and installable units to this repository and use it for sharing it with colleagues, etc

Work with the bundle

Now let’s have a look at Eclipse as OSGi runtime.

Open the OSGi Console via drop down of the view:

The result is a long list of all installed plugins

The result is the matching bundle, which is our sample bundle.

The result prints the ID of the bundle, which is not the BundleSymbolicName, but the ID, under which it is recognized by the OSGi registry

You’ll see that this ID is the same like the number of the name of the created folder in the “bundles”-directory.

The result is the detailed information about the bundle.

The status of the bundle is RESOLVED. It hasn’t been automatically started.

In general, there’s no result for that command.

But since we’ve modified the start() method in our bundle, we see the System.out printed to the OSGi Console.

Check the status of the bundle.

The status is now ACTIVE.

Now our System.out is printed to the console:

Now you can check the status again. It is back to resolved.

The result is a list of all bundles in status RESOLVED

As a result, our bundle is uninstalled. You can verify it by typing lb mysampl and it won’t find the bundle

the folder bundles\<bundleID> has been removed

The bundle jar in the plugins folder has not been removed

So, the uninstall procedure works on the metadata. This light-weight mechanism allows e.g. to switch between versions and to go back to older version if desired, etc.

Now we install the bundle again, this time using the command line.

Note that the path has to be adapted to your export location.

Afterwards start the bundle as described above and check that it becomes active.

Increase version of the bundle

We go back to our bundle-development and we develop the second version of our bundle.

In the Activator-class, we modify the start() and stop() methods:

Then we export the bundle, as described above, to the same location, i.e. into the same repository.

there are 2 jar files with same name, but different version

As result, you can see the new bundle in the new version.

But the replacement has took place on metadata-level, the jar file in the Bundle Pool (plugins folder) hasn’t been removed.

Anyway, no problem, we install the old-version-bundle manually.

As result, you’ll get both bundles

Now you can go ahead and start both bundles

As result, you’ll get both bundles in status ACTIVE.

That’s all for our first exercise.

Homework for you would be:

The first one has a dependency to mysamplebundle_1.0.0

The second one has a dependency to mysamplebundle_1.0.1

Export them and play around with them.

Start them, stop them.

Stop both mysamplebundle bundles, then start the first new bundle.

The second exercise can be found here: Getting started with GWPA: OSGi Introduction Exercise 2