SAP PO: How to handle offline adobe form without the standard task

This solution comes handy if you need an alternative way to send asynchronous adobe offline form, either in  BPM scenario or

In this case you don’t need to care for the response by the receiver of the mail and you can persist the email as message in SAP PI, giving you more control and monitoring features, e.g. by using PI based alerts or SolMan message flow monitoring.

Let’s go through the step-by-step solution:

1 – Get libraries from JAVA AS

Get the following libraries from your JAVA AS Instance:

This is the tricky part: you’ve to build and deploy a WebService on SAP JAVA AS which will take care of the adobe composition part.

You must create a DC EJB Components with the following required DC:

Create the EJB with two input fields and one output field:

– template(String) –>The name of the form deployed in ECM repository

– return(String)    –>the Adobe Offline compiled form in base64

In attach you can find the sample code: getPDFTemplate.txt

Deploy your service on the JAVA AS and check it using the WSNavigator; take the response and parse it using an online base64 converter such as

You should import the PDF data as external message in your SAP PI ESR, then build a java mapping in the following way: 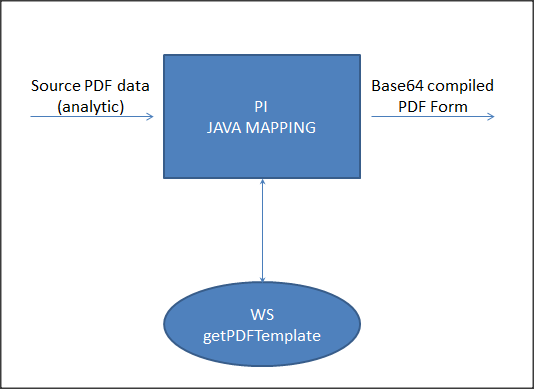 In attach you can find the sample code for the PI Java Mapping which will do the job.

Please note that you have to put the libraries described above as external libraries in the same SWC of your java mapping inside the ESR.

your choice( in my case BC_BPM).

Once you have the PDF form done and compiled you can easily manage it as an attachment via email using PI,

Of course, the same result could be achieved in an easier way in ABAP, but here is all managed internally in your PO instance.

one question, for those lib, why not using the standard DC dependency?

I am just curious to know if we can extend this functionality to receive the inputs added by the receiver in adobe interactive form.