Roses are Red, Violets are Blue, Yamaha MT100 I still love you

As Valentine’s day 2014 draws to its conclusion I thought it might be fun to reflect on the history of the day itself, its relevance today in the 21st century, and my first ‘tech’ love. [note: Tech love is as far as I am willing to go in a public forum]

Valentine’s day in the 21st century is a truly interesting phenomenon, particularly when you consider it’s heritage.

Valentine’s day started before the Middle Ages and is even referenced in the work of Geoffrey Chaucer, where it is believed that the the first recorded association of Valentine’s Day with romantic love is found (in Chaucer’s Parlement of Foules – 1382), Chaucer wrote:

For this was on seynt Volantyns day

Whan eury bryd comyth there to chese his make

Translated – [“For this was on St. Valentine’s Day, when every bird cometh there to choose his mate.”]

Many years later in the Victorian era, a time when the notion of romantic love really existed, Victorians celebrated the event by sending hand-painted cards to the object of their desire, expressing the seemingly unsayable in rich prose in the hope of winning their heart. Something they did anonymously.

Fast forward to the 21st century and it’s hard to think of anything being anonymous in today’s socially networked and mobile connected society. A quick browse of my Facebook feed reveals a litany of declarations of love, with attached pictures of overpriced, grudge-purchased champagne, chocs, and flowers – which neatly reminds me that I need a serious ‘friends-purge’. Having said that I do completely understand that when you’ve parted with the best part of $75-$100 to bring a smile to the face of the one you love, or indeed the one you desire to love for ever and ever, then perhaps it’s not too vulgar to put your name at the bottom of the declaration 🙂

And so to my own declaration of undying tech love. That honour has to go to my ‘faithful’ and reliable Yamaha MT100 Portastudio. 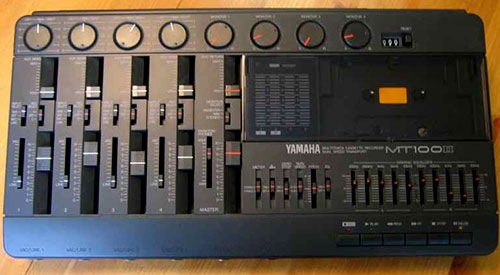 Purchased in 1986, this little beauty was with me through thick and thin, through all my heartbreaks and teenage angst, four tracks of wonder to overdub vocal harmonies and dual guitars, and sometimes even double up to 8 tracks (when you could mix down the bass and drums onto a single track – hmmm). I still have the Portastudio, it still works, even if I don’t 🙂 but just taking it out the box and playing some of the TDK SA90 tapes and listening to the genesis of one or two of my own radio ‘hits’ took me back to a very, very happy and fulfilling time.

I guess if (among the schmalz and the commercialism) Valentine’s day can still give us the opportunity to reflect on what ‘love’ means, or if it can simply encourage us to make an emotional connection with something or someone that matters then its relevance today can be just as powerful as it was way back at its inception. I might be declaring my love here for an inanimate object but the more I think about it, my Portastudio serves a a conduit for the love that lives in every memory, in every emotion, and in every chord that was lovingly surrendered to 4-track over those beautiful years.

Do you have a story about your first tech love? Join SCN and post your story here on Customer Edge. Or, if it fits into 140 characters—send us a tweet and a pic @CustEdge on Twitter.  For inspiration, take a look at our video about why the best connections are personal connections.

Thanks for your wishes! I wish you the same. I wished my wife as Happy Wallet Damage Day! 😆