The Pride and Passion

The giant digital wall at Labs India reads “KKR gets new technology from SAP Labs for IPL 7 Players’ Auction”…..isn’t that a wow moment. It is for all of us at SAP and especially most of us who are Cricket enthusiast (I know, enthusiast is a very unpopular word in Indian Cricket today 😛 ).

I am working with SAP for not so long, still it looks like my entire career revolves around SAP and SAP products and I take pride in saying that. So, when the above news broke out it was a moment of amalgamation of Pride and Passion.

I did keep an eye on live telecast of Indian Premier League season 7 bidding, hoping to get a glimpse of SAP application being used by Kolkotta Knight Riders.

The big numbers, the big money, the amazing skills, the glittering glamour and off-course the game and the players from different countries, the sixes they send out of the stadium makes IPL such a fascinating event every year. The bidding day was just the beginning; wait till we have action starting in couple of months.

I hope we also get to see more and more SAP applications used in future. For some of us the money and fame part makes you think “How I wish my parents allowed me to focus more on cricket”. Anyway, at least I keep myself associated with this passion using what I do best, data analysis using SAP technology 😆

Really, SAP BI tools especially the one I used for this analysis here, SAP Visual Intelligence makes playing with numbers so easy. Yeah, it is like playing. I tried to put up some of the interesting analysis based on the auction data. (Source – http://www.iplt20.com/playerauction)

As always, SAP Business Intelligence tools gives you insight into things which you don’t get to see with plain data. Let’s see some interesting analysis based on IPL 2014 auction (Note: players retained are excluded)

1. How the teams stacked up at the end of the day  Clearly Delhi Daredevils did a complete revamp of their team. They had full quota and at the end emptied their entire purse. Now that’s some fresh beginning. Royal Challengers Bangalore on other hand could not buy Bangalore’s players as they splurged on big fish. 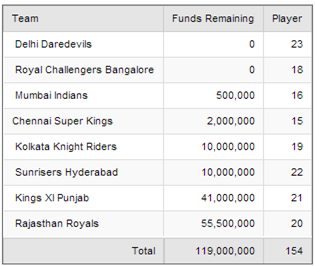 2. Who is the Big Fish? And a Wicket-Keeper is second highest paid player !!? 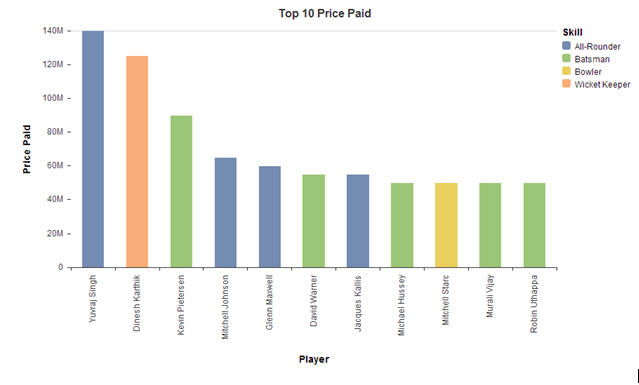 The reality is Dinesh Karthik is a good T20 player and had a very good season last year and that should explain the 12+ Cr cash spent on him.

Oh yeah, a bowler in Top 10! Watch out batsman, if the matches are not played in Indian dead rubber and instead on South African soil, these guys will make you dance to their tunes – Remember Dale Steyn, Mitch Johnson (he is in top 10 too)

3. But, did anyone say, we do not have enough bowlers in India? 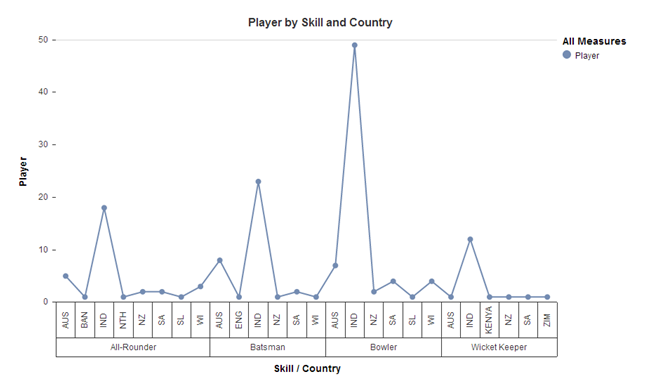 Interestingly this commodity was sold the most by far. I guess you need some for nets, some as water boys 😉 . 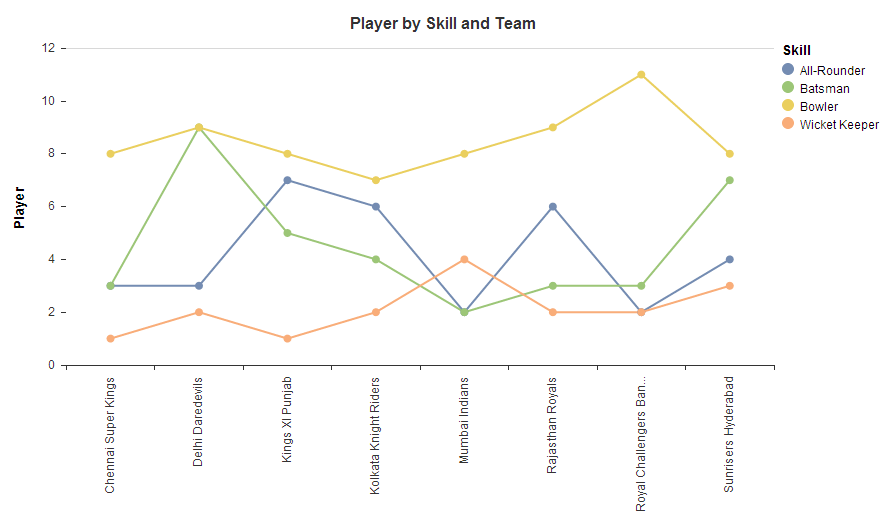 Delhi is packed with bowlers and batsmen. Bangalore has plenty of bowling resources, although they still have to win their matches based on their batting strength. KKR, Kings X1 and RR believe in all-rounders. MI chose 4 wicket keepers, now that’s a luxury.

5. Another interesting fact is that the Ratio of Indian to Non-Indian players was exactly 2:1 !! But 50% non-Indians managed to earn 83% of price what Indians got in their kitty. Take out Yuvraj and Karthik and the price percentage crosses 100% ! 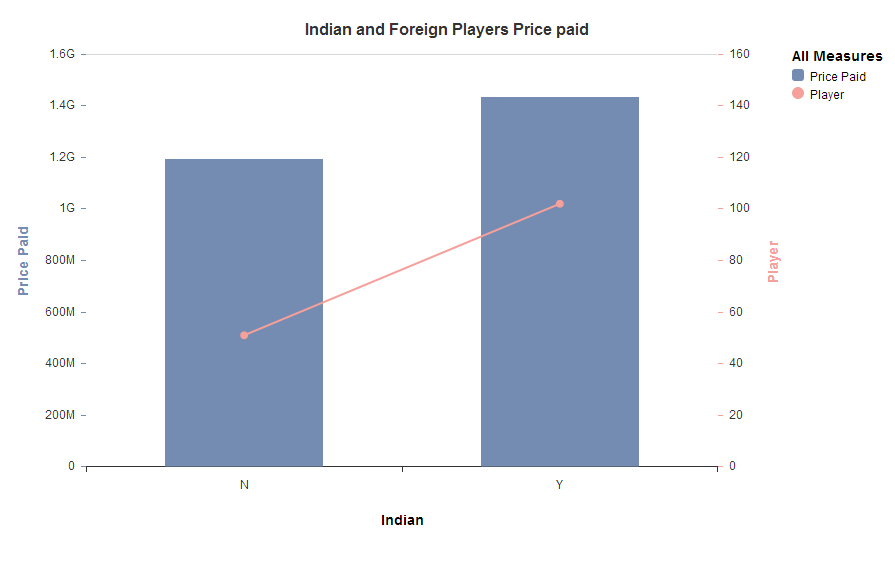 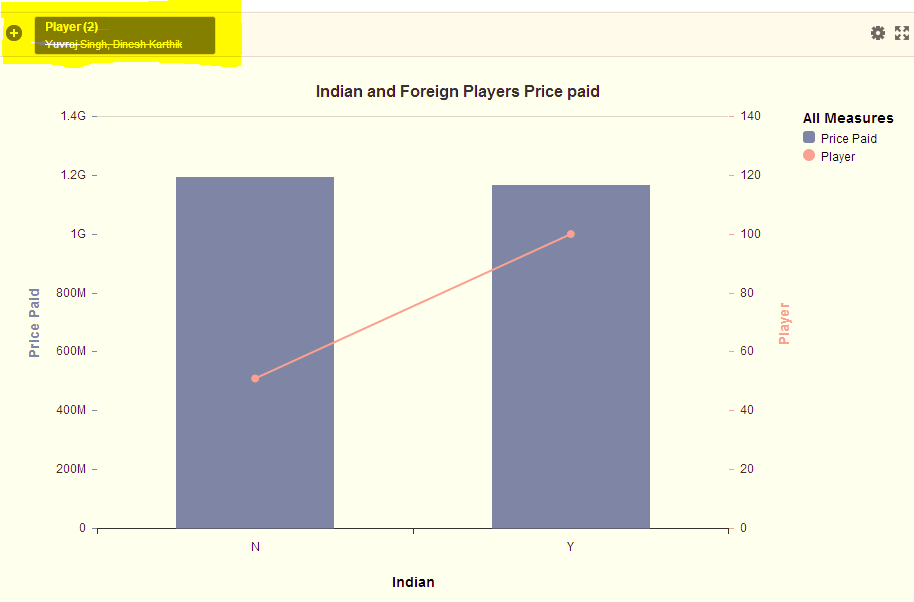 Okay, that’s some possible analysis done in the limited time. I am sure there are many more possibilities with different SAP analysis tools and technologies.

Please read another story at http://scn.sap.com/people/giriraj.harapanahalli/blog/2012/12/30/analyze-sachins-batting-record-using-sap-visual-intelligence

One such amazing analog with proofs .. Keep up giri good thoughts...