My First Tech Love: The Commodore 64

In the Academy-award nominated movie Her, a man falls in love with his operating system. Here’s Johann Wrede’s story of his first tech love. 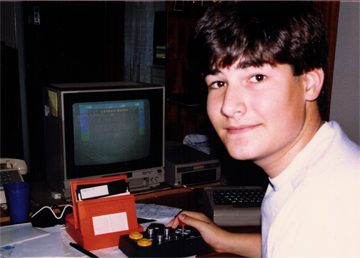 I remember the day we met.  It was 1984 and I was nine years old, standing in the Best Products showroom in Moorestown, NJ staring at this amazing device. Boxy, and beautiful in shades of tan and brown, with a multitude of ports, large connectors and sturdy cables. A device whose presence brought a functional elegance that appealed to the budding engineer in me. On the connected monitor, a royal blue screen, trimmed in light blue, beckoned to me with a blinking cursor and the word, “READY.”

I had no idea what to do, after all I was just a child, but the Commodore 64 was a kind and patient teacher. The spiral-bound user’s guide sitting next to it on the flat-pack office desk (also for sale) was a trove of knowledge just waiting for me to open.. Which is precisely what I did.  Learning my very first program while standing in the store was simple – and I’ve never forgotten it:

I stood mesmerized as the words HELLO WORLD! scrolled infinitely down the left side of the screen.  I remember pressing the RUN STOP key and marveling at the responsiveness of this device. It was like the video games I loved playing – except I was in control and could make this machine do whatever I wanted, without having to constantly feed it quarters. I was hooked.

I convinced my parents that this was a device that I couldn’t live without. My father, having worked on the room-sized computers of the 60’s and 70’s, agreed to open his wallet. And that’s how I wound up with my first love, the Commodore 64 with its matching monitor, sitting on the desk in my room. My life had changed.

By the time I was in 7th grade, I had found friends with Commodore 64s and had amassed a vast collection of 5 1/4 “ floppy disks, a joystick, a 300 bps modem (followed quickly by 1200 bps, and 2400 bps models), and a Panasonic KXP-1080i dot matrix printer. In three years of self-guided exploration I had not only become completely proficient in BASIC, but I had taught myself to type, how to do basic desktop publishing with “The Print Shop,” and how to use bulletin board systems (BBS) to communicate with people from all over the world.

And before you start thinking that it was all serious business, know that much of my time was spent gaming. I loved early games like Zork and Archon, marveled at my first flight simulator experience in Skyfox, and spent hours playing ported arcade games like Donkey Kong, Out Run, and Ghosts’n Goblins. 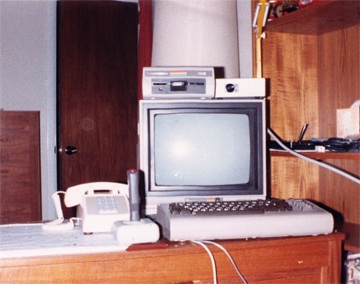 For those years, my Commodore 64 was everything to me:  a tool, a toy, and a means to focus my boundless curiosity on an emerging technology. Eventually, though, I outgrew my love.  I got my first PC AT clone in 1988, learned DOS, and delved into QuickBasic. I still tinkered with my Commodore, exploring the differences between GEOS and Windows 3.0, and playing the games I had amassed.  But mentally, I had moved on and my beloved C64 began gathering dust. I eventually gave it all away to a family who couldn’t afford to buy a home computer.

Commodore International filed for bankruptcy in 1994, and Best Products closed its doors for the last time in 1997, but the impact that those brands had on me endures. Falling in love with my Commodore 64 in the store that day long ago set me on a course for a career in the software industry.  So, happy Valentine’s Day to you, former Commodore and Best Products employees, and thank you for helping me become who I am today.

Do you have a story about your first tech love? Join SCN and post your story here on Customer Edge. Or, if it fits into 140 characters—send us a tweet and a pic @CustEdge on Twitter.  For inspiration, take a look at our video about why the best connections are personal connections.

My first program and tech love was on the Commodore 128D. Nice blog post!

Awesome to see how the same love story occurred in other countries around the globe. Though you are one lucky camper, Johann: I had to be content with the fabulous Datasette 1530 and a green monochrome monitor for my C64. 😉

Anyway... great post, thanks for this trip down memory lane!