[Oracle] Troubleshooting parallel executions (PX) – What the heck … why is the SQL not executed in full parallelism?

Last Saturday i got a phone call from a SCN member who found me due to my blogs and postings on SCN (thanks to SCN for the new client 🙂 ). He told me that his company faced a critical performance break-down with parallel queries, which were partially not executed in full parallelism anymore. The SAP ECC system / Oracle database was quite large (≈ 12 TB) and running on a powerful IBM Power platform with a lot of concurrent users. They implemented parallel execution (query) some time ago to fulfill the performance requirements of the business and it was running smoothly until this Saturday, when they had a SAP go-live with several new sites.

At first we talked about the usual suspects like adaptive multiuser algorithm or automatic degree of parallelism, but none of them were appropriate as PARALLEL_ADAPTIVE_MULTI_USER was set to FALSE and most of the other influencing parameters like PARALLEL_DEGREE_POLICY or PARALLEL_MIN_PERCENT were stick to their default values.

So basically said the developers (and DBAs) have full control of the degree of parallelism in such a configuration until all PX servers are used up. The client also provided me a parallel execution report, which clearly showed that only a few PX servers were currently in use, but the requested degree of parallelism was not allocated by some of these critical parallel queries.

The whole picture was kind of strange and we could summarize the situation like that:

Unfortunately we were not able to figure out the root cause immediately by phone and so i requested a PX trace to troubleshoot this issue furthermore.

I will change my usual blog structure as it is easier to follow the troubleshooting path without knowing the root cause in first place. In consequence the following demo is structured like that:

Demo of the PX issue

All of the following content is executed with a normal Oracle user called “TESTUSER”.

Create the base table 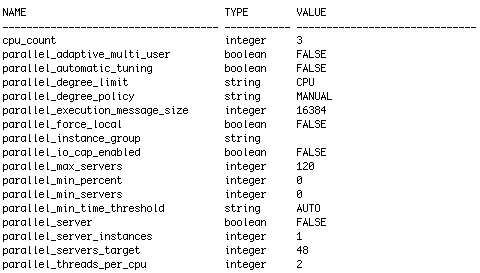 *** Footnote: A few more parameters are modified to run into the previously described issue, but they are omitted at this point for better illustration. The whole pre-steps are included in the demo sub-section called “Show root cause and adapt solution”.

The execution plan itself includes the parallel query steps and states that the (requested) degree of parallelism is 20 because of the hint. 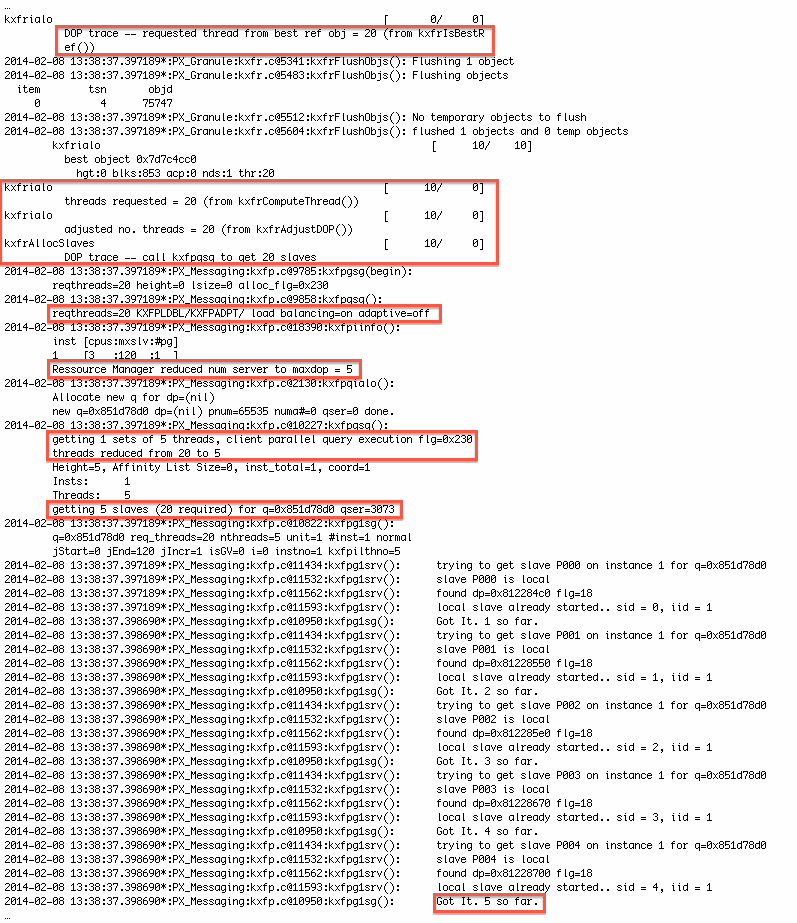 The PX trace clearly states the root cause of that “unexpected” downgrade. The requested degree of parallelism was 20, but it was downgraded to 5 by the Oracle database resource manager.

The original resource plan was more complex of course, but basically a resource plan like this (related to PX) was implemented for that particular SAP system. I stripped it down to an absolute minimum to keep it as simple as possible. The plan directive for the consumer group OTHER_GROUPS limits the degree of parallelism (of a single operation) to 5 in contrast to the unlimited degree of parallelism for the consumer group CG_HPQTEST. The consumer group mapping is implemented on session attribute level (client identifier), which basically means that in my case only the SAP user SAPUSER100 (not Oracle user!) is allowed to run a higher degree of parallelism (of a single operation) than 5. The session attribute client identifier is set by the SAP kernel. So let’s set the session attribute to SAPUSER100 and re-check it again.

The session 174 is dynamically assigned to the consumer group CG_HPQTEST based on the session identifier attribute SAPUSER100. Now let’s re-run the parallel query and check the requested and allocated degree of parallelism. The statistics are reset as the instance was restarted to get a “clean state” once again.

The execution plan is exactly the same as before.

Now we got exactly the resources, that we requested from the database. The SQL itself is executed in parallel with a degree of parallelism of 20 – nothing is downgraded.

The Resource Manager helps overcome these problems by giving the database more control over allocation of hardware resources and enabling you to prioritize work within the database. You can classify sessions into groups based on session attributes, and then allocate resources to these groups to optimize hardware utilization. Resources are allocated to users according to a resource plan specified by the database administrator. The plan specifies how the resources are to be distributed among resource consumer groups, which are user sessions grouped by resource requirements. A resource plan directive associates a resource consumer group with a plan and specifies how resources are to be allocated to the group.

Since 9.0.1 a new mechanism has been introduced to obtain Parallel Execution (PX) trace information. This trace mechanism is keyword and parameter based. The existing event-based tracing is still available, but for some areas in _px_trace like compilation there is no event. Because each component of PX controls its own tracing, getting an event-based trace usually means setting one or more events and then deciding at what level they should be set; this can be cumbersome and there may not be any consistency of trace format across the different events. Keyword-based tracing is simpler to set than event-based tracing and is consistent across PX components.

There are up to three components that can be specified when starting the trace:

The possible values for each of these is

Now you may wonder how this situation arrived so suddenly in that SAP system. The new (go-live) sites used several new SAP users, who executed that critical business processes in consequence. The Oracle resource manager mapping was implemented on SAP user (Oracle client identifier) level and all the new SAP users (from the go-live) were just allowed to run the parallel queries with a lower degree of parallelism as the mapping was not adjusted. The Oracle resource manager itself was introduced to protect the system from unexpected and unwanted load as only the performance critical business processes should be allowed to use such a high degree of parallelism. A mapping based on the module / application level may be the better (dynamic) solution in such cases as the critical business processes are pretty static, but the (SAP) users who should run them may change frequently.

Oracle itself provides great insights into parallel execution with the help of the PX trace facility and allows us to troubleshoot it on our own very deeply. 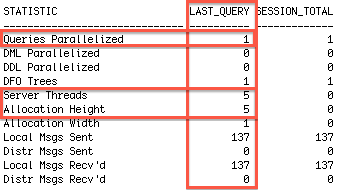 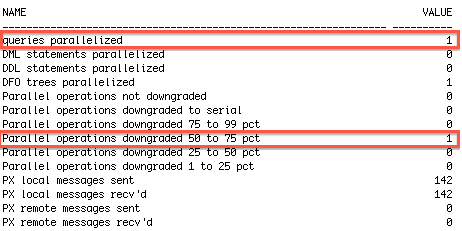 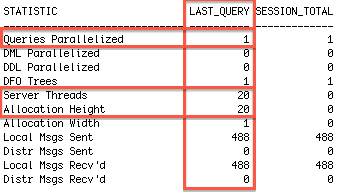 This is a great blog with a very detailed analysis regarding parallelism, I just have one comment, as per my understanding and the recommendations of SAP Note 1579946, it is not generally recommended the usage of the Oracle resource manager  due to the wait event "resmgr:cpu quantum”.

thanks. This was a bug and is fixed since version 11.2.0.2 (which is already out of support for long time). In general "resmgr:cpu quantum" is something that you might want with Oracle resource manager as you want to "reserve" the CPU resources for some more important business processes, etc.