“Simplify everything, so we can do anything,” SAP co-CEO Bill McDermott said two weeks ago at SAP FKOM in Las Vegas. It was a distinct departure from SAP’s last 40 years. I still remember leaving my first week on the job six years ago; I felt more confused about what the company did than the day I had started. Yet, in an age where the customers’ customer has increasingly become the focus — and simplicity and innovation are the battle cries — it makes perfect sense why “simplify everything” is the task before us. 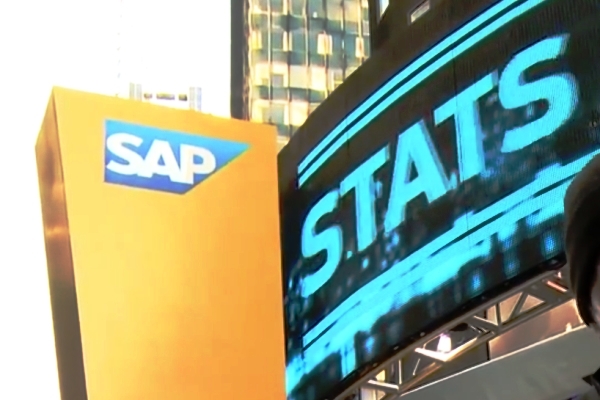 A week later, the Super Bowl delivered an opportunity to showcase the SAP and NFL partnership in the heart of Times Square. What better example is there of a need for simplicity than Times Square, where blinking signs, larger-than-life billboards and religious zealots compete for the attention of each passerby?

The six-slide PowerPoint of what SAP is and its five-pillar approach can’t exactly compete with a 25-foot poster of David Beckham. Yet that is exactly where SAP found itself leading up to the Super Bowl, on the corner of 42nd and Broadway. And SAP more than held its own, showcasing its brand through the SAP Stats Zone to hundreds of thousands of people who came to visit the activation in the four day period.

The SAP Stats Zone was a combination of interactive games for the fans, social sentiment visualizations and avatar picture technology. And it was a large departure from any previous SAP activation.

Having worked three of the four days at the activation (not a booth or a tent — it is way more!), I got familiar with the various different technologies offered. The avatar creator was by far the fan favorite, giving kids and adults the ability to stand in front of an interactive screen, choose their favorite team and have their face visualized in the NFL uniform of choice. Then there was the interactive quiz game that tested user’s football knowledge via five questions, with the high scorer winning a prize. The highest score, nearly a perfect one, went to a nine-year old who tested over and over for more than two hours (I have trouble keeping adult’s attention in a two hour demo let alone a nine year old, clearly we were on to something). Finally there was a massive video wall outside of the activation, which showed specific stats related to the game and social sentiment from the fans across the U.S. (This became a prime photo spot for many as the week went on, especially Denver fans who increasingly turned the social sentiment map of the U.S. a bright neon orange.

The activation kicked-off on Wednesday and gained in momentum and traffic through Saturday night, when the line wrapped around the entire structure. Kids left saying, “That was so cool.” And adults said it was really fun too.

Small technological nuances that made it specifically SAP, such as the avatar display auto-populating fans’ favorite team helmet and uniform after scanning their RFID fan badge, or real-time social stats showcased on the big board. But SAP’s emphasis was on the fan experience, not the company’s journey.

The SAP activation was ultimately a huge success because it did one not-so-simple thing: It simplified everything. Hopefully this is a view into the new SAP, where we can do truly do anything.

Time Square is interesting on a dull week, let alone Super Bowl weekend. And the comments and questions we got seemed to get more absurd as the week went on — or maybe my attention and interest in them just increased. Below are my top 12 real questions/comments I was asked while working the SAP activation in no particular order:

How Super Is the Super Bowl? 2014 Edition

Watch the 7 Super Bowl Commercials That Won the Internet