Generally, we refer following options for the correct BOM selection if there is so many alternative BOMS available for the same FG Product for the planning run in same month,

1.create alternatives for the materials, then make BOM Status inactive for the not required BOMS,keep active status for the required BOM,Check any previous requirement exist into the MDO4 screen, delete such requirement, then create requirements in md61,then run mrp into the md02 screen.

2. In T code OS32, enter your material, plant, valid from and valid to selection, alternative BOM number. This option is valid if there is fixed alternative bom selection is decided among so many alternatives.But this also requires to work with BOM status.

3. You also have the option into the production versions to lock for any usage.

4. Make the setting for alteration into the lot sizes and validity periods for production versions and BOM.

This case is for the same products with different variants with BOM Status activation, 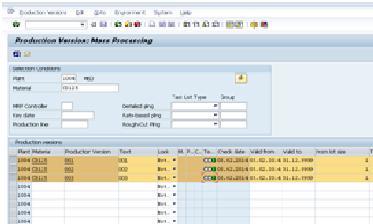 Then I have made small changed in MD62 by selecting only Day format instead of month format as following to put the requirements for the different variants for the same FG product in same month.

Then assign the Production versions content ALT BOMS as per requirement in schedule line tab IN MD62 as following, 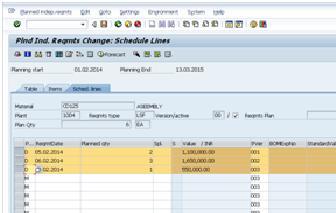 Then run the MRP with parameters 1-3-1-1-2, results as following, system explode all three ALT BOM and saved the results, 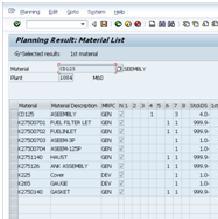 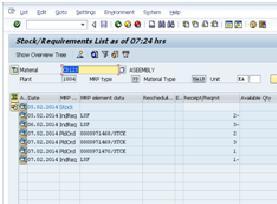 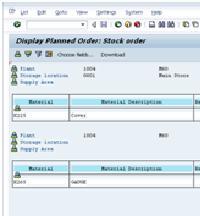 FOR ALT BOM 2-BOM components as per ALT BOM 2 For ALT BOM3-BOM components as per ALT BOM3 Pl. covert this planned orders into production orders. Now the Production orders were created for the different variants for the same products in same month

CASE B- By selection of BOM status and MD62 Screen.

Then run the MRP with parameters 1-3-1-1-2,System is showing following results, System has explode alternative bom 1, though I have mentioned alternative BOM 3 into the OS32 Screen, 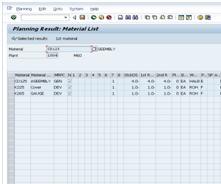 System also created planned order, then I made BOM Status inactive for the alt BOM 1 and keep same setting as Alt BOM 3 in OS32.

Then run MRP with same parameters, System shows following results with exploding BOM 2,though I have maintained alt BOM 3 into OS32, 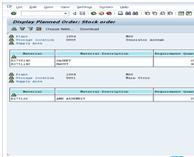 But I have to plan all three variants for the same FG Product, so I have opted following option,

Since the system default pick up BOM 1 during MRP run, I converted the planned order into the production order. With this FG Product with variant 1 is updated.

I have to create planned order for the second alternative BOM, as the production order is exist for the ALT BOM1 with BOM status active for all the ALTERNATIVE BOM,

When run MRP with same existing parameters, system  again explode the ALT BOM 1 ,save the results, but does not create the planned order as there is Production Order exist for the ALT BOM 1,

I made changes in BOM Status inactive for the ALT BOM 1,Then run the MRP with same parameters, with the same requirements into the MD62 screen,

The results were that no planned order is created, as there is Production order is exist for the same requirement into the MD62 screen,

Then run the MRP, system has explode first two BOM and saved the results,

System has saved the BOM components for the ALTERNATIVE BOM2, as there is BOM Status inactive for the ALT BOM 1.

Pl.note the point here that if I kept BOM Status active for the first ALT BOM1, then system explode the ALT BOM 1 Only. But my requirement is to create the production order for the ALT BOM 2, so that same FG Product with different variant could be produced.

For the ALT BOM 3 Requirement, I again made the BOM Status inactive for the ALT BOM 2,Now there is inactive status for the first two ALT BOMS  and increase the requirement 1 to the same FG component to 6 in MD62 Screen,

Then run the MRP with same parameters, by keeping same setting in OS32,

System has explode all three ALT BOM as following and saved the results, System saved the BOM Components as for the ALT BOM 3,

Pl.note that system has updated ALT BOM 3, because there is BOM Status inactive for the first two BOM, I have converted the planned order into the production order,

Now I have the Three Production Orders i.e. three ALT BOM Variants for the same FG product in same month.

This is the simplest way of selection of correct BOM in case of multiple boms available for the same FG products,

BOM selection mentioned in OS32 does not works,

This definitely avoids mess up in planning providing easiest option to plan the components.

I would like to request to experts, to add their own excerpts to simplify the scenario.

I will work the scenario and if any clarification get back to you.

Thanks for the comments,

Such document nicely work for the Manufacturing Enviro as Planning guys look for the  best and easiest option during MRP Run,

Thanks for the remark,

The best way to do the same is using Quota management with Production version selection.