How The Sochi Olympics Skate Around Logistics Hurdles 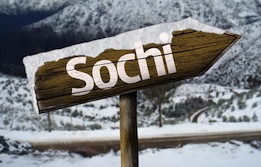 The Olympic flame began its journey to Sochi for the 2014 Olympic Winter Games after its lighting in Ancient Olympia, Greece on Sept. 29. The lighting marked the symbolic start of the Olympic Torch Relay, which saw the flame cover over 65,000 kilometers and all 83 regions of Russia, as well as traveling within an hour of an estimated 90 percent of the Russian population before reaching the Olympic Stadium in Sochi on Feb. 7 for the Opening Ceremony. About 14,000 torchbearers have carried the torch.

And for the first time ever, the Olympic torch took a journey into space. It was even taken for a spacewalk outside the international space station as it orbited some 260 miles above Earth.

Logistics of hosting a Winter Games is not all Downhill

Getting the torch from Athens to Sochi is not the only logistical challenge that the organizers have faced. Sochi is one of the warmest locations ever selected for the winter Olympics. The Olympic ski village of Roza Khutor, boasts the largest snow-making operation in Europe, with 404 snow cannons. The organizers have even saved 450,000 tons of last winter’s snow under specially designed thermal blankets, just in case. This is the largest snow warehouse ever and a great example of risk management and mitigation.

To get the city of only 340,000 people in shape to host 6,000 athletes and several times that number of tourists in February, $43 billion has been spent on an enormous transportation infrastructure. This is above and beyond the cost of the actual sports facilities. To bring tourists from the airport to the ski slopes in 40 minutes, for example, is a 48-km road and railway that cost more than $8 billion, one of the most expensive such transport links in the world. Visitors to Sochi will be transported by a new Light Metro. The public transportation system will include 80 trains, each capable of carrying 800 passengers. At its peak the Metro is expected to transport 70,000 passengers every hour during the games.

To improve the logistics of tracking and tracing members of Team USA, they will use a new Team USA Guide app (developed by AT&T) to help athletes, coaches and delegation members to communicate with each other during the games.

Global sporting events have huge logistics challenges, but can also have a tremendous boost for local economy (as seen in the London Olympics of 2012). It has been estimated that sponsors and licensed vendors will spend almost half a trillion dollars. This is not only an all-time record for the winter Olympics, but also for summer Olympic Games. Countries, companies and competitors have been planning for years since the announcements of Sochi 2014. Let’s hope they are ready for the logistical challenges in front of them, and “Let the games begin.”