Calculation of TDS U/S 194J in SAP Under New Amendments

based on the below circular I did some configuration changes and tested with two case scenarios. Please check if this is helpful

Purpose:Based on the below circular, certain modifications have been effected to meet the conditions. The document also projects the accounting treatment in SAP for payment made under section 194J where Service tax is explicitly mentioned or not mentioned in the invoice.

Central Board of Direct Taxes

Subject: TDS under Chapter XVII-,13 of the Income-tax Act, 1961 on service tax component comprised in the payments made to residents – clarification regarding 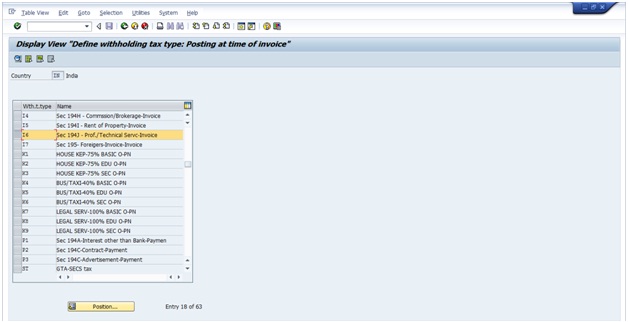 Change the Settings from Gross Amount to Net Amount as shown below. 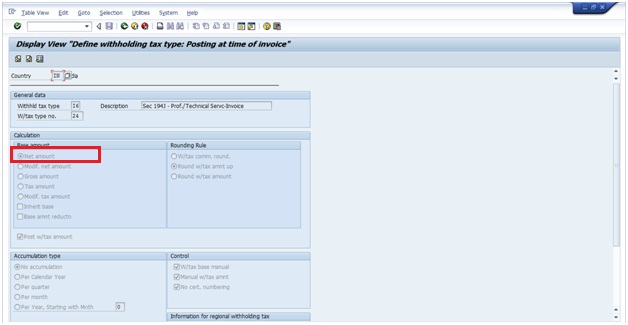 By considering the following example, we will take two scenarios,

At the time of executing the invoice (FB60/Miro), user is required to select the NIL tax code, system will

automatically pick up the base amount for calculation of TDS if the relevant tax code is maintained in the vendor master.

At the time of executing the invoice (FB60), user is required to select the relevant service tax code ,system will pick up the net amount for calculating the TDS by excluding the service tax amount. The relevant TDS tax code should be maintained in vendor master

I hope this will help you in understanding the new changes.

Its nice documentation thank you for your efforts .

Its a perfect documentation and very much helpful.. Thanks for your efforts.

Our scenario is to Show service tax as expense

Please suggest  us it is urgent.

This error I think is more to do with OKB9 settings. Pls check and assign your Cost element. It should work.

hey nitin... subhadeep is right... u need to maintain cost element in okb9 for the following error

I had already tried with OKB9 but in MIRO the Cost center is not getting from OKB9 it fails.

what is the GL like ? is it a tax gl or expense GL ? Pls provide me the screen shot of the MIRo and its simulation. will try to solve it.

Since all the Invoices may not have ST component is it not correct to consider and alter only the Witholding Tax Base Amount to get the desired result keeping the existing config as it is ?  Pl opine.

Hey subhadeep... awesome document... the calculation is working perfectly as per ur steps

Thanks for your reply I have tried OKB9 maintainted values for respective cost element but in MIRO OKB9 doesnt triggers. I was suggested from some other thread to create substitution rule for this and call OKB9 in substitution. But this is wrong method coz TAX implications are SAP CIN standard it should flow cost centre for tax line items if not satisfied planning to write to SAP. Any other solution please suggest

As per explained above do change for you with holding tax types.

Even I am also doing the same configuration but its working fine in MIRO and calculating the TDS on net amount whereas in FB60 its calculating wrongly but when I select FB00 tax on net amount its giving me proper result, so my question is that after doing setting for net amount in WHT tax type do we need to change the user parameter as well ???

not sure on what how you have configured, basically when service tax component is not shown separately , you need not select any tax code at the line item level or at max select V0 (Nil Tax). On the other hand if service tax component is shown  then you need to select the tax code. Pls check how if you are selecting the tax code properly. Otherwise there should not be any difference in the output whether you do a FB60 or a MIRO.

I think  is there any Document Splitting Error for me

Service tax portion is to be debited separately. but giving error for profit center. the system couldn't get cost centre for Service tax line item.

i am facing the same problem that TDS should be deducted without service tax , if i make changes in withholding tax type  as u said in above solution will the system impact in any other area in sap i have a question  ???

if you make any changes within WTT and WTC, it should not be impacting in any other area. You can always test this in QAS however.

Keep sharing these type of legal change updates & how to configure it existing system...

It's so useful and aspiring as a consultant to keep track of changes happening in statutory part as per the Government.

Thanks a lot for your precious time in making as well as sharing both configuration and test part of the document.

in MIRO with hold tax codes not coming but  in FB60   withhold taxes coming, can any one resolve this issue.