Probably everyone has heard of “Mobile first”. This concept is not only something that SAP is promoting (Going Mobile at SAP), but also partners, customer and analysts like Gartner  or Forbes are clearly supporting this strategy.

The concept and idea are very clear: if you design applications to run on a mobile device with its small screen, then everything — the whole user interfacce — has to be simple and intuitive.

One of the most prominent examples of this strategy is SAP Fiori. Based on SAPUI5 beautiful and intuitive applications are created and extremely well accepted by our customers.

… does not mean mobile only

In a customer presentation that I attended some time ago I also heard this feedback. SAP Fiori is an extremly powerful step by SAP to address workers across devices: whether they work on a mobile, tablet or desktop. However, the customer continued saying:

“Mobile is sexy, but only 5% of our workers are using mobile devices (for their jobs). The majority of my users are still using a desktop”.

Still the data that I am accessing when working on my desktop is very often the same as the data which I need to access from my mobile device. So I would need to get SAP data in the tools that are running on my desktop.  And the desktop still is dominated in great numbers by Microsoft. Depending on which numbers you want to believe Windows is installed on 70% to 90% of desktops and Microsoft Office is running on over 1 billion devices world wide and is used in most organizations: 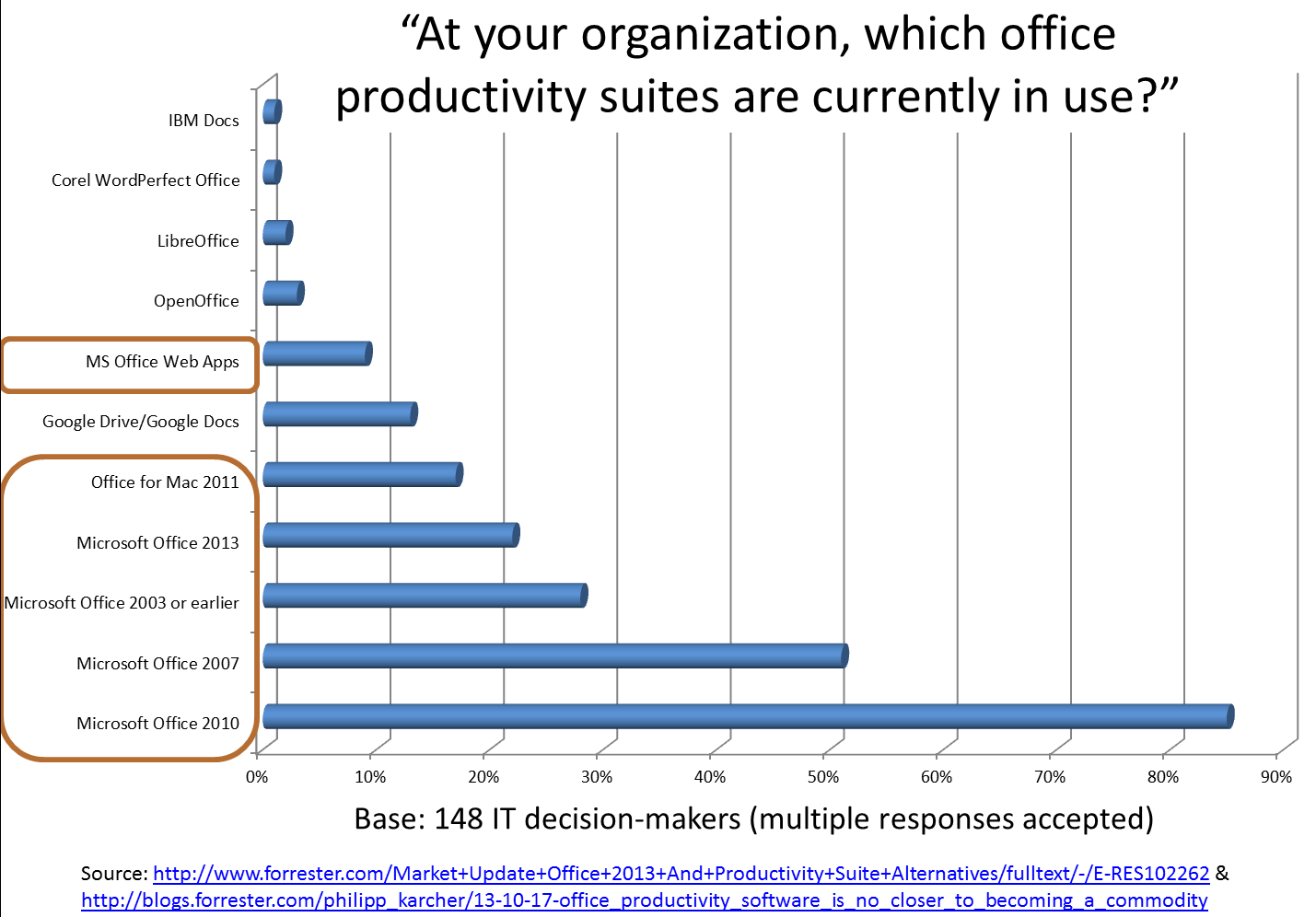 Why don’t we take the concept and ideas — and actually the applications and scenarios — and make them available on the Microsoft desktop?

When you get a Purchase Order or Credit Memo and you are sitting in front of your Microsoft Outlook already writing an email — wouldn’t it be great to get this workflow directly as a Task in Outlook and be able to approve it from there?

For the business partners, that you just worked with on your tablet in you SAP Fiori application  — wouldn’t it be beneficial to have the very same contacts in your Microsoft Outlook? 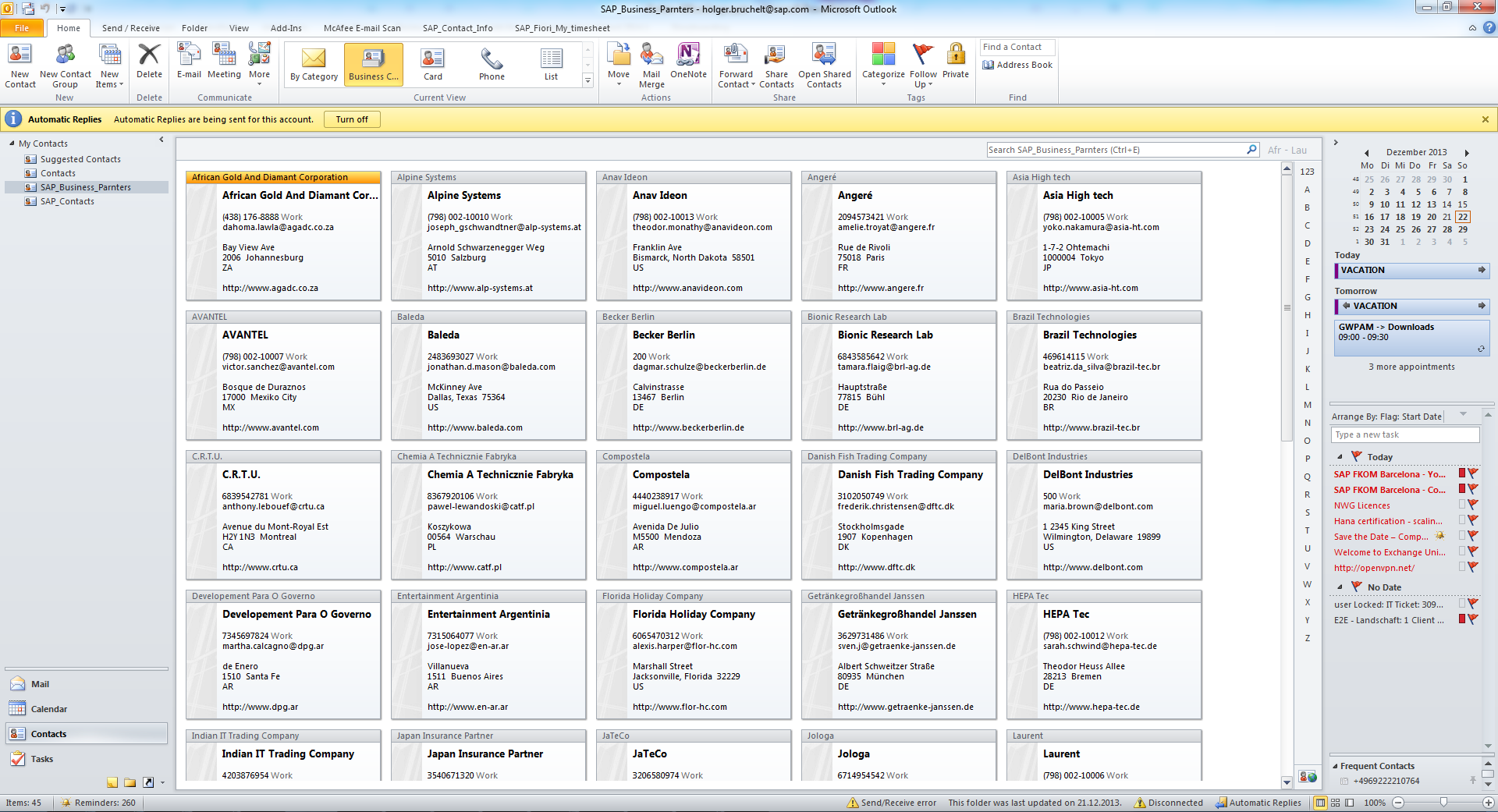 Similar with the tracked time that you just viewed in your SAP Fiori My Timesheet app on your mobile device — wouldn’t it be good to have these dates also in your Microsoft Outlook Calendar? 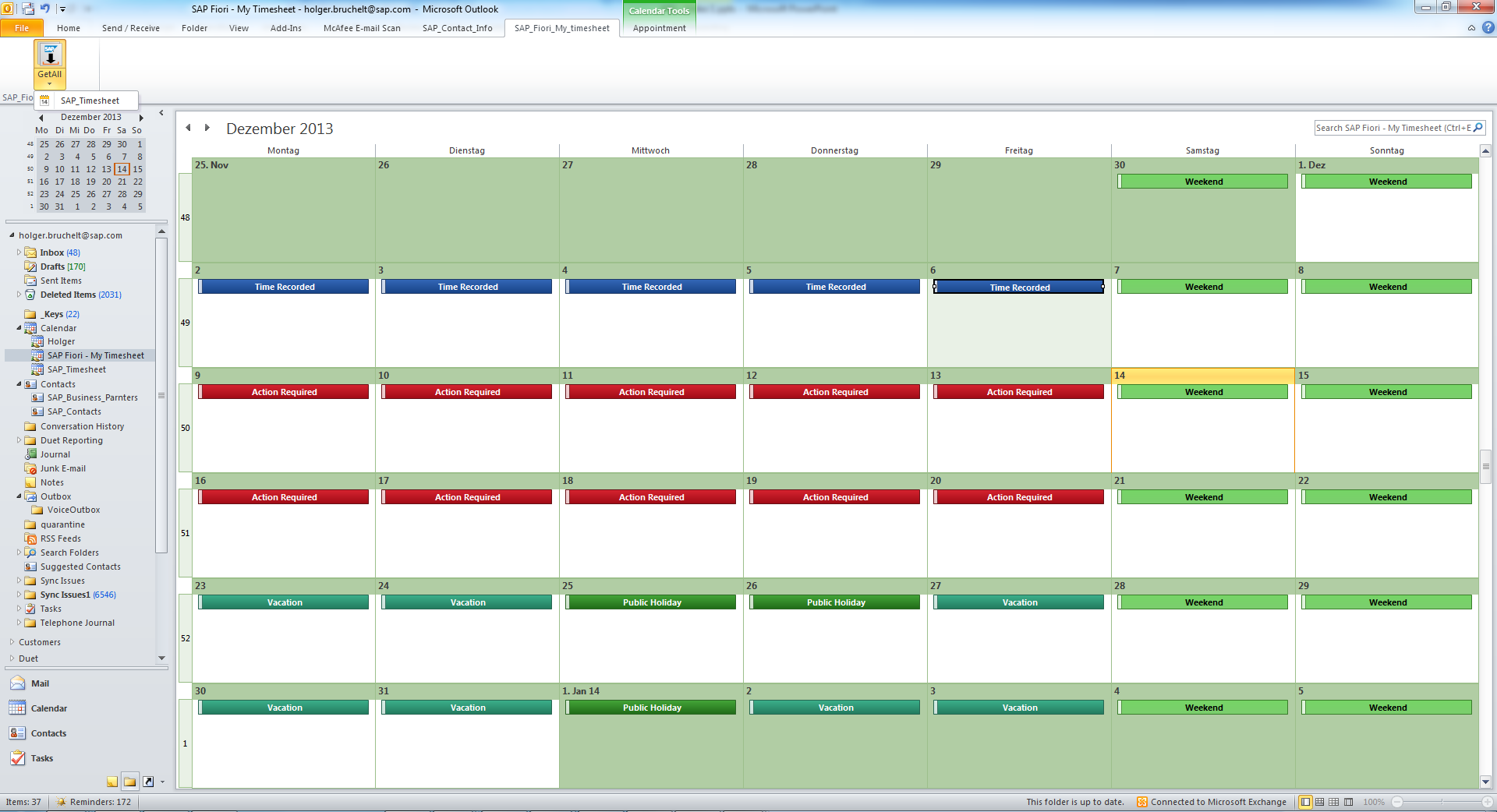 94% of companies use Microsoft Office

Similar to Microsoft Windows, Microsoft Office is still the dominant productivity suite at our customers. Not necessarily always the latest and greatest version, but definitely Microsoft Office. So in addition to having the power and flexibility of SAP Fiori an integration in Microsoft Office would absolutely make sense. We could not only offer an additional user interface by bringing SAP data to known and used Microsoft UIs, but also improve user productivity by keeping the end-user in the UI that they are currenlty working with.

Going beyond these existing scenarios it can also make a lot of sense to empower the users to interact with data from SAP in a way they are already used to. When you think of mass data manipulation probably Microsoft Excel comes into your mind. So again this Microsoft based UI / tool could be the perfect choice for the end-users to work with data from SAP. The challenges in integrating SAP to MSFT world

All these integrations have one fundamental problem. You have to make sure that the integration, the interoperability between these known applications and data from SAP is easy, quick and secure. A recent study by IDC stated that more and more hobby developers build applications. Developing applications is getting easier and easier with impressive and powerful tools such as Visual Studio. However, developing and designing applications for life can be complicated. Gartner looked at the overall total cost of ownership of such applications. A very important factor to the total cost of ownership is the very first design of the application. How easily is the data consumed? How flexible is the application? How are security concerns like SSO, tracing, monitoring and scalability aspects handled?

Keeping the hobby developers in mind and also surveys that show that only very few developers have security and “enterprise ready” know-how this is an issue.

The “nexus of forces” which Gartner started to highlight some time ago is a similar example of this. To quote:

“The Nexus of Forces is the convergence and mutual reinforcement of social, mobility, cloud and information patterns that drive new business scenarios. Although these forces are innovative and disruptive on their own; together they are revolutionizing business and society, disrupting old business models and creating new leaders. The Nexus is the basis of the technology platform of the future.”

This technology platform needs a basis that not only addressed these forces, but also makes sure this is done in a secure and enterprise compliant / ready manner.

It gives IT the confidence and security that SAP Gateway for Microsoft based applications adhere to certain design-patterns, leverage company wide security and supportability requirements. And help applications to be scalable from the very first POC for a few business users to the final roll-out to 10,000 users.

With this framework the business is all of sudden empowered to respond to critical changes in the workplace at their own speed. They don’t have to rely on IT to help — because IT has already provided the required framework to make these changes happen.

Optimizing the investments in Microsoft and SAP by providing a bridge that brings the two worlds together SAP Gateway for Microsoft boosts workplace agility. This engagement initiative provides the business the flexibility they need to leverage existing skills, while still complying with corporate and IT regulations.

Very valid point. Although Mobile is hot, and certainly a MustHave for any new productivity application scenario; the nowadays information worker typically still spends most of his/her time in (larger) desktop context, 'living' in the Office suite. To fully expose the SAP data and processes to their environment, mobile alone is not enough; desktop must be considered and included.

Thanks for sharing, William.