Watch the 7 Super Bowl Commercials That Won the Internet

In last night’s Super Bowl XLVIII the Seattle Seahawks thoroughly dismantled the Denver Broncos in what ended up being a bit of a boring and one-sided affair. Good thing, then, that the Super Bowl is accompanied by Super Bowl commercials, where many a corporate dollar is spent to reach us on a gut level and connect with us emotionally. Which commercial did best at resonating with us, the audience? In order to find out, I fired up SAP Social Media Analytics by Netbase to take a look at the numbers.

This year saw a lot of brands pre-releasing their Super Bowl ads, either in full or as teasers (yes, teasers of ads). For good reason, by the looks of it: brands like Oikos, Sodastream, VW, Jaguar, and Budweiser saw pre-Super Bowl attention 3 times higher than during the Super Bowl itself. With so many eyeballs up for grabs before the Big Game even airs, pre-releasing Super Bowl commercials is probably a trend that’s here to stay.

I was still interested, however, in who did best during the game itself. The metric I used here is mentions, which simply is how often a given topic (similar to a search query) appears in a sentence in the database of indexed content that is at the heart of SAP Social Medial Analytics by Netbase.  If we plot the number of mentions for each brand over time and stack them on top of one another, here’s what we see: 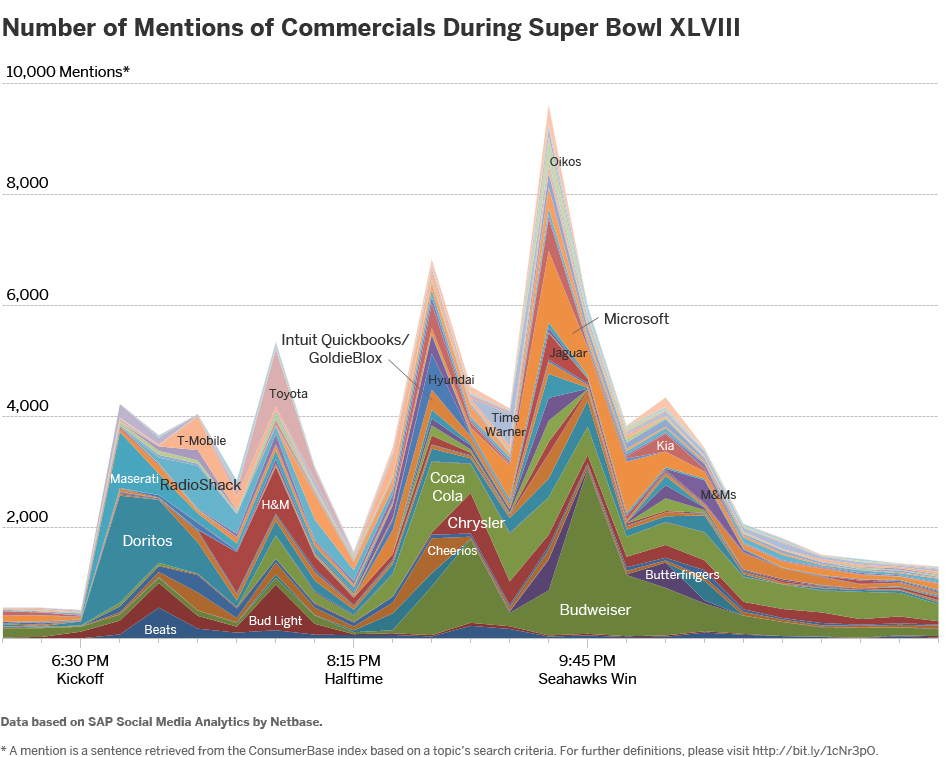 It looks like Super Bowl viewers this year were in need of some heart warming, judging by the commercials that resonated most during the game. Four out of the top five commercials (Budweiser, Coca Cola, Microsoft, and Chrysler) appealed to different aspects of the human spirit and made us feel good about being us. There were also, of course, plenty of funny commercials, and I think RadioShack in particular did a great job by poking fun of itself.

Here then, the list of the 7 Super Bowl Commericals That Won the Internet:

For a full list of Super Bowl XLVIII ads, check out YouTube Ad Blitz, where you can also vote on your favorite ad.

I’ll leave you now with my personal favorite, in which Squarespace brings the internet to life:

What was your favorite ad?