Jimmy Fallon’s career – and much of who he is as a person – can be summed up in eight minutes.

Look, I don’t mean that as an insult. 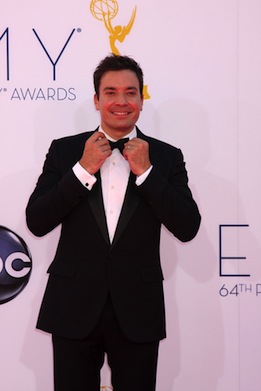 Fallon has risen to become a star by doing just one thing: being himself. And that self is on full display in an eight-minute video made in 1998.

According to a profile of Fallon in the February issue of Vanity Fair (an unsatisfying excerpt of which is available online.), Fallon’s sole ambition growing up was to be a cast member on Saturday Night Live.

He insisted on watching the show alone so he wouldn’t have any distractions, and he spent most of the rest of his free time watching tapes of the show so he could practice the skits and develop his impressions of celebrities.

The Only Job He Ever Wanted
The moment Fallon says he had been waiting for all his life came when he was just 24: an audition for Lorne Michaels, the creator and lead producer of SNL.

Michaels has a practice of filming auditions of potential cast members so that he and the other principals of the show can review them later and decide who makes the cut. The auditions are completely unscripted. Just a camera sitting on a tripod with the record button on.

When Fallon did his audition in 1998, YouTube didn’t exist. However, in hindsight, his tryout seems like a prototype for the site’s most successful content: It’s unscripted, it’s funny, it’s a snapshot in time (spoiler alert: he’s skinnier), and perhaps most importantly, it’s short (just eight minutes).

A Preview of the Everyman Talk Show Host
But the Fallon video is also more than that. The bits are funny, but beneath them, the video hums with Fallon’s trademark genuineness. His voice shakes with nervousness in between bits when he explains to Michaels and the crew what he’s going to do next.

And at one point, he loses it and cracks up at one of his own jokes, giving us a quick preview of the guileless, almost childlike enthusiasm that has propelled him to the pinnacle of late-night franchises, the Tonight Show.

Whether it’s all a put on (Vanity Fair strongly suggests that it isn’t) Fallon comes across in 1998 just like he does now, as the kind of charming, funny person we would all like to be and, uniquely, the only one we can imagine being.

Michaels, the TV industry’s heat-seeking missile of undiscovered comedy talent, saw something unique in Fallon. “There’s a sweetness to him,” he told Vanity Fair. “I only hate to say that because it looks lame in print.” According to the article, Michaels offered Fallon his dream job soon after the audition.

A New Kind of Online Bio
What’s interesting about the video is that it captures the most important historical event in Fallon’s career while also offering insight into who Fallon is as a person. It’s a kind of encapsulated biography online.

Increasingly, this will be how we come to know famous people, for better in Fallon’s case, or worse, in Paris Hilton’s case. Online video is a new source for journalists and historians to profile their subjects. Indeed, the Vanity Fair author cites Fallon’s audition video and notes the nearly 3 million views it has had so far.

That’s a lot of views. And they happened despite the video being really hard to find. Unless you Google “Jimmy Fallon SNL audition,” the video won’t show up in the magic first two pages of a Google search and it is nowhere featured on Fallon’s NBC website.

Should the Industry Try to Capitalize on It?

From a business perspective the question becomes, what should the entertainment industry do with video moments that capture the history and personalities of their stars like this. Right now, the practice is to simply excerpt bits from their shows in “best of” compilations and market them.

Yet unscripted moments from people’s lives are increasingly becoming the way we learn about famous people (and everyone else). Ultimately, these moments will have a longer shelf life for celebrities like Fallon than clips of their latest performances. They are a new way for entertainment companies to market their celebrities and to track them over time without waiting for the book or the movie.

We’ve been talking to some entertainment industry experts at SAP and other companies to figure out how online will affect the future of entertainment. We’ll let you know how that turns out.

Meanwhile, what do you think?

Jimmy Fallon rocks! Made me smile just reading about him (will watch the video - thanks for sharing!). Marketing should just to stay the heck out of this and let people simply be themselves once in a while. 🙂

One has to wonder how many more unguarded moments we'll see like this in the future. Thanks for the comment!