One thing to note is the data counts 1 medal for every team.  As an example, the data lists an individual row for every gold medal received by the famed 1980 US Hockey team, “Miracle on Ice“: 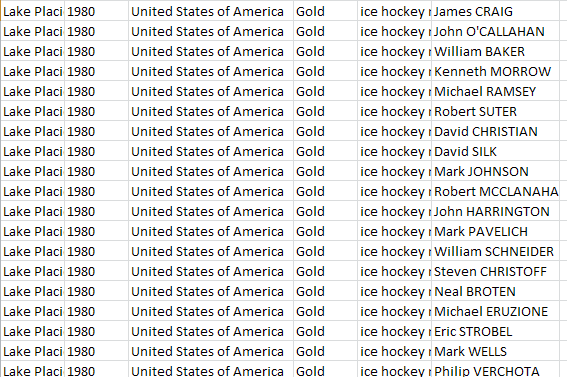 So I publish this data to Lumira Cloud at https://cloud.saplumira.com/landing-page.jsp

I really like the “Did you know” tidbits of information shown in the above right.

More did you know – of course, the Canadian gold medal count was high when the Winter Olympics were hosted in Vancouver.

I scanned some of the visual discoveries.

As expected ice hockey awards the most medals, as shown above.

The did you know also shows that the United States had high medal counts in Vancouver.

The tag cloud shows overall countries with high medal counts.  As expected, the former USSR was a big powerhouse in the Olympics, along with Canada and the United States.

When filtering by gold medal only, the former USSR tops the gold medal counts.

Something interesting to consider as the Winter Olympics approach.

There are a couple sessions on Lumira Cloud at BI 2014.

Any insight as to whether Bode Miller will get a downhill gold in his last hurrah? i was thinking of putting a little wager down 😉

Good one - I haven't set up any predictive models on the data yet... 🙂

Not fare to count all the team members of ice hockey! 🙂