This document aims to give an introduction to Business Rules Management System (BRMS) as a development tool, and in addition how to maintain such rules in different use cases using Java Session Bean(s) and Java Classes.

To provide an implementation for handling selective multiple actions with a set of conditions from SAP BRMS Decision Table and also to brief the purposeof each component which actively takes part in its execution.

The components of NW CE BRM, which help to perform the lifecycle aspects of rules like modeling, testing and runtime changes, are described below:

The points mentioned are explained in detail below

What is a Rule Engine?

A Rule Engine is a component which is available as a service in NW CE Server. It takes multiple requests and invokes the relevant business      rules from the rules repository.

A request to the rule engine can be sent using

In this document we will discuss in detail about point 1.

How a Helper Class accesses the Rule Engine?

An instance of RuleEngine.java class plays a key role in accessing the Rule Engine component. The instance is created via a Helper Class through a JNDI (Java Naming and Directory Interface) reference name. It is a Java API for a directory service that allows Java software      clients to discover and look up data and objects via a name. 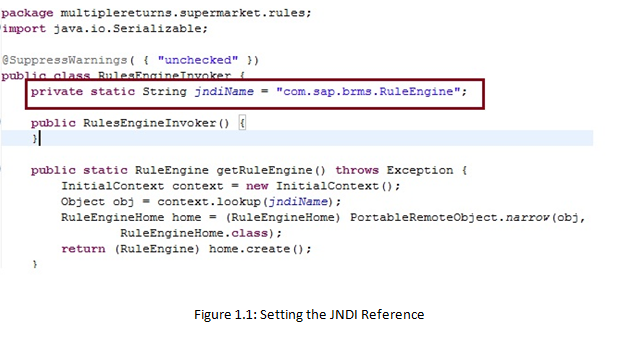 How to access a specific Ruleset via a Rule Engine API?

Whenever we try to implement the rules in our business scenario, we create a Rule Set in the Rules Composer DC.

Shared is the sample code to invoke a Rule set using RuleEngine.java class instance where projectName is the Rule Composer DC name. 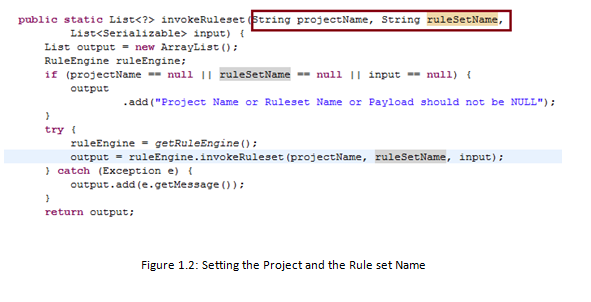 Note: “Ruleset” is accessed by the EJB Class. Rule or Decision Table cannot be invoked directly.

How does a Rules Composer DC get executed?

In order to implement BRMS in our business object, we have utilities to access the Rules Composer Development Component, for an instance it can be a Session Bean which can access these Rules.

The figure clearly depicts the exact flow of executing the Rules. At first the Ruleset is invoked and then the Rule is triggered, and based on the condition provided in the Rule, the corresponding Decision Table is evaluated.

A DTO is an object which carries data between processes. It has to do with the fact that communication between processes is usually done resorting to remote interfaces (e.g. web services), where each call is an expensive operation.

In this case, a Java class is created in a package in the EJB DC and exposed as a public part. 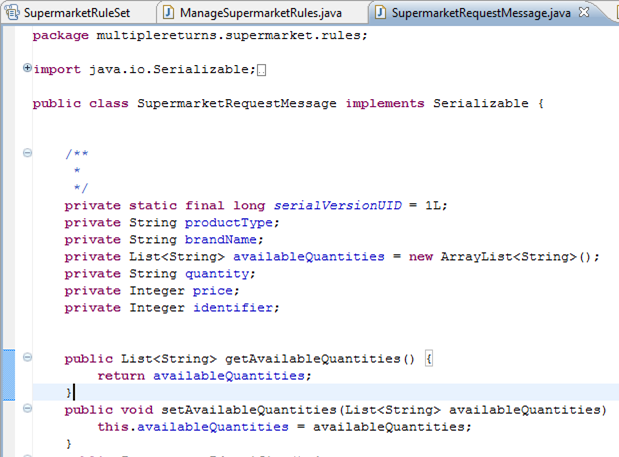 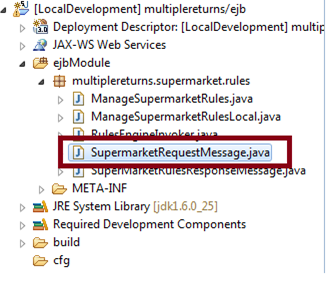 This Class contains getters and setters of the parameters which will be binded to the Decision Table in the Rule Composer DC. 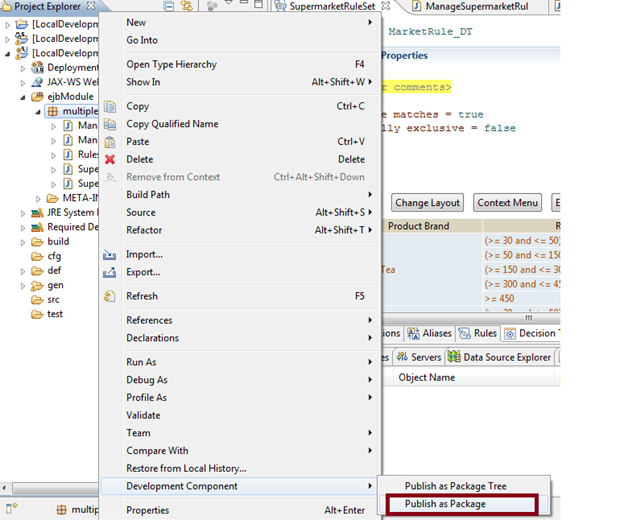 When we try to load a class via an EJB Component, the package structure comes up asking to choose the java class file.

3. There should be only design time dependency to the ejb DC where the DTO is created which is explained as below.

Why only Design Time dependency on EJB Component?

Before understanding why only design time dependency on EJB Component, we discuss the type of dependencies and their need for a DC –

–Deploy Time: This dependency is needed when some Enterprise Application or Web Application is archiving its related jar/war files and deploying a new build each time. Talking about the rules, it is an independent component present on the server, for which there is a Rule engine to invoke the Rule set. Hence Deploy Time dependency is not added on EJB.

–Runtime: It is needed,  when some API’s are being used or processing has been manipulated in between where there is a hard reference created between the components during Runtime, but Rules Composer Component never uses or exposes any method or API which is accessed in EJB for Runtime Processing. Hence Runtime dependency is also violated.

Design Time dependency is thus added so as to use its class as an object and create a decision table on top of the same object.

What is a Rule and how does it behave?

A Rule is an entity in Business Rules Management Systems which describes the constraints, regulations and policies that are used to define the behavior and conduct of a business. They represent the core logic of each organization, guiding and controlling the basic processes that form the backbone of any business transaction.

A Rule in a Rules Composer DC looks like this – 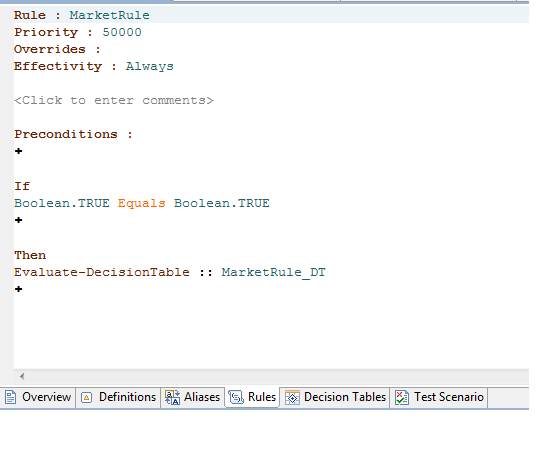 A Rule has various internal functionalities to perform –

What is a Decision Table and how is it executed? 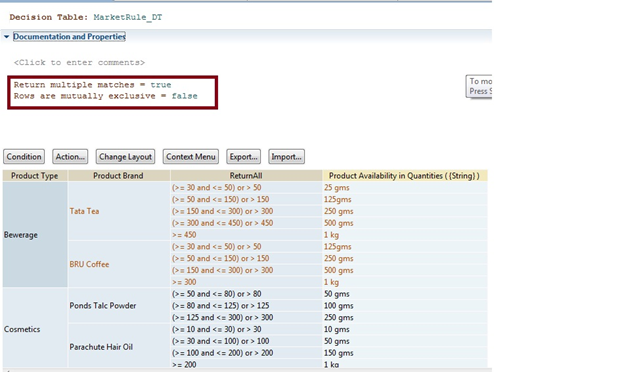 Features of a Decision Table –

Here are some details about “Documentation and Properties” for a Decision Table which one needs to know, it has two properties of type Boolean, each having a specific function to perform –

–Return multiple matches – As the statement says, it is to return multiple matches from a decision table. It depicts that the control flow will keep oniterating through the Decision Table from Left to Right and Top to Bottom until it finds a valid set of actions/returns on a given condition.

It is made true if it has to return multiple matches otherwise it is false by default.

–Rows are mutually exclusive- In this case, the Decision Table is expected to return a single value, the control searches for only one record match and it terminates the further flow of execution.

It is made false if it has to function for returning multiple matches otherwise it is true by default.

Why use identifier in the case of multiple match returns(like above case in screenshot)?

Identifier is a parameter used in the Data Transfer Object whose getter method is taken as one of the conditional parameter in the Decision Table. It is an “Integer” type parameter whose input is always set to the maximum value available in the table.

Its primary purpose is to let the control undergo multiple iterations from left to right and top to bottom in the Decision Table. The Identifier serves the purpose only when the properties “Return Multiple Matches” is made true and “Rows are mutually exclusive” is made false in the Documentation and Properties section of the Decision Table.

Whenever an identifier is used, then it is expected to have a fixed value inside the Session Bean. In the case of Conditional Multiple returns, the user shall provide the value himself but not fix it.

Refer to the use case related to identifiers and conditional multiple returns in Appendix 1.1 and 1.2.

Why addToList() method is used in multiple match returns?

The List fails to return multiple matches, the reason being –

-There are no elements added to it which intends it not to return multiple matches.

Hence, we now create a method called addToList() method in which we add elements one by one to the list used. The element addition happens when the control is iterating from top to bottom on a decision table until we get the desired list of returns.

(Here it is named multiplereturns/brm).

Create a Package and create the following classes in it –

Here is the following structure of the package

a. Return multiple matches a true

b. Rows are mutually exclusive a false

Details of the document is good.

As Morning shows the day.

Your first contribution towards knowledge-sharing gives the assurance that we will get more elaborated information in coming days.

It is really well described document .

This document is very useful for all the beginners who want to work in SAP BRM.