EMC: Running Their SAP ERP in the Cloud with SAP MaxAttention

“Gentlemen, we can rebuild him. We have the technology. We have the capability to build the world’s first bionic man. Steve Austin will be that man. Better than he was before. Better, stronger, faster.” 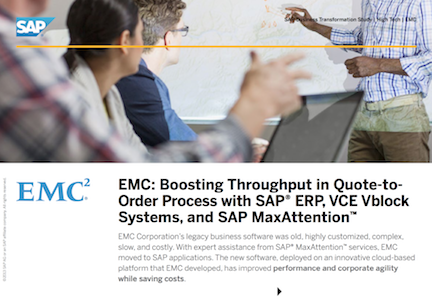 Four decades have passed since the world was introduced to the bionic man – a superhero powered by advanced technology capable of feats that far exceeded normal human capabilities. Steve Austin could run as fast as a car, move heavy objects, and see distant objects with an artificial eye. With his bionic implants, Austin was faster, more agile, more powerful than any rival.

While the technology that powered the bionic man remains a work of fiction at this point, SAP Active Global Support delivered SAP MaxAttention has pioneered a similarly impressive kind of transformation in corporate IT in its recent engagement with EMC, a global leader in enterprise storage, cloud, big data, and security services.

EMC’s existing systems, built on an aging and largely custom code, was simply not agile or powerful enough to serve EMC’s business needs as the company rapidly grew its business and expanded the range of products and services that it offered. SAP MaxAttention helped EMC establish a platform for growth based on SAP ERP solutions hosted in a 100% virtualized private cloud.

For EMC, working with SAP meant the right software, the right platform, and the right teammates.

Better than they were before. Better, stronger, faster.

“Many times we’ve been asked if we could recommend SAP MaxAttention and we’ve never once been hesitant.”