On the Couch or At the Game: Your Super Bowl Cheat Sheet

Super Bowl Sunday is rapidly approaching and if you’re like most fans, you’ll be

huddled up with friends and family around the HD TV anticipating not just a competitive game but tremendous commercials – priced at $4 million a pop for 30 seconds!

While it’ll be great to see the Broncos and their high-powered offense square off against the shutdown defense of the Seahawks on the frigid field of Metlife stadium, the fact is… the Super Bowl is a social event.

Call me old-fashioned, but I’m actually referring to “social” as live, in-person interaction (although Twitter roared with 24.1 million tweets during last year’s Super Bowl).  And like any other event, success isn’t solely determined by the end result of the game, but the journey along the way… the Party! Let the three G’s guide you to perfection:

The infographic below provides some insane food facts, just remember to burn the excess off next week. When it comes to planning, consider choosing simplicity over extravagance by ditching the fork and knife. A tailgate theme with finger foods is a sure fire way to get the crowd ready for the game. After all, it’s tough to beat a cold brew and some barbeque.

While I don’t condone gambling, some people actually bet on the coin toss: If you’re crazy enough to do so, just note that in the last 47 Super Bowls, “heads” is winning the all-time battle over “tails” 24-23. Tails is due right? No, this thought is called a Gambler’s Fallacy, or the idea that future results of a random process are affected by past results, as if probability deliberately made things balance out. Instead, save your money, ditch the bookie, retire those old, boring block pools and give the “Possession Pool” a try, it’s fun, it’s simple, it’s engaging, and it keeps every single possession intriguing – here’s how you play: 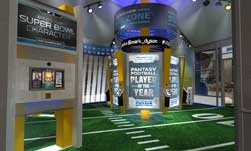 If you’re one of the lucky few that scored a ticket to the game (Ebay listings included a 30 person suite with food and beverage for $508,265), then dress warm and be sure to participate in the pre-game festivities occurring all week on Super Bowl Blvd. and come visit me at the SAP Stats Zone on Times Square. This area will include fan voting for the NFL.com Fantasy Player of the Year, more trivia quizzes, fan avatar creators, and social media buzz monitoring. Also consider voting on the “Oscars” of Design, a tool used by the San Francisco 49ers to simplify the scouting process. But most of all enjoy the game and try to save the tweeting for Monday.

Over-the-hill, ex-athlete like me? Let’s reminisce the good ol’ days together @airsomers and on LinkedIn